It seems to fit the left’s description of a “hate crime.”

This story is an absolutely vile tragedy.

Will the left, who quickly jumped to conclusions about the Atlanta shooting being an example of an anti-Asian hate crime and continue to insist that it is one despite the shooter saying it was because of his sex addiction, similarly denounce this disgusting disregard for a woman’s life as a racially-motivated hate crime?

The reason that they have deemed the Atlanta shooting a “hate crime” was that the shooter was white and several (though not all) of his victims were Asian women. Former Democratic Presidential hopeful Andrew Yang said that the shooting was “clearly” a hate crime, and Sen. Tammy Duckworth is also insisting that it is a hate crime “>because it “looks like one” to her.

According to that definition, the horrific death of Christine Englehardt, 24, in Miami is definitely a hate crime, though it’s unlikely that the corporate media will label it that way. Englehardt was white and the two men that last saw her alive were black.

The story is unbelievably tragic — a young woman in Miami during Spring Break was drugged, raped, and left to die in a hotel room. While she lay alone in the hotel room either dead or dying, the two men that raped her went on a spending spree with her credit cards that they stole from her.

Evoire Collier, 21, and Dorian Taylor, 24, have both been charged in the sexual assault and drugging of Christine Englehardt. She was found dead in a hotel room in Miami on Thursday morning, hours after allegedly being filmed on surveillance cameras entering the hotel with the two men…

…Police say the two men gave Englehardt a ‘green pill’ then sexually assaulted her at the Albion Hotel at around 1am on Thursday morning. They then left her unconscious in the room and took her credit cards and cash with them to fund the rest of their trip. She was found dead by hotel staff the next day.

Collier and Taylor appeared in court in Miami on Monday charged with burglary with battery, petty theft, sexual battery and credit card fraud.

They may also face manslaughter or murder charges if the drug they gave her is proven to have played a role in her death.
Source: Daily Mail

According to the police report, Collier said that he and Taylor met Englehardt at a restaurant on March 18 and gave her a “green pill” — which he claims he thought was Percocet — as they walked along Ocean Drive. It’s unclear if the pill was taken willingly or if it was spiked. Authorities are investigating if this “green pill” may have been a narcotic such as fentanyl.

The surveillance footage from the Albion hotel lobby shows the two men entering the hotel with Englehardt at around 1 am on Thursday, March 18. Englehardt was staggering and Taylor was holding her from behind by the neck so she could stand.

Collier said that when they reached the room, he and Taylor each had sex with Englehardt, but also that Taylor raped her because she seemed to be unconscious. This claim that rape occurred only when she was unconscious is disingenuous since Englehardt couldn’t have consented at all to sex with either man since she was under the influence of alcohol and drugs so heavily that she couldn’t even stand.

After raping Englehardt, the duo stole her phone, cash, and credit cards and left her half-naked and unconscious on the bed.

Hotel surveillance video captured Collier and Taylor leaving the hotel about an hour after they arrived. They then went on a spending spree with Eckhardt’s money and credit cards all over Miami Beach.

Eckhardt’s body was found half-nude on the bed in the hotel room on Thursday and emergency services were immediately called.

The cause of death has yet to be determined. The Miami-Dade Medical Examiner’s office is investigating if Eckhardt died from an overdose of whatever drug it was that she was given by Collier and Taylor.

The drugging/raping duo were then out and about the next day with other Spring Breakers as though nothing happened. The pair were captured in a photo of a young woman on vacation with her sister. 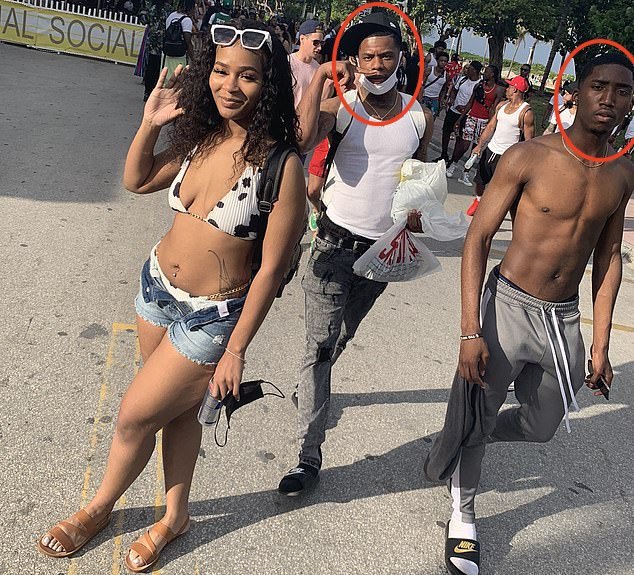 De’Asia Skillern, 22, was in Miami for the week with her sister. She was posing for a photograph on Ocean Drive when they photo-bombed her. Skillern thought nothing of it until she posted the photo on her private, close-friends Instagram story and was told by friends who the men were.

‘I was just walking around taking pictures, my sister showed me, like hey people were photo-bombing you. They didn’t stop to talk to me, they were just walking past.

‘To continue on with your vacation as if it was OK… it just goes to show you. You never know who is around you,’ she told DailyMail.com on Wednesday.
Source: Daily Mail

Collier and Taylor were arrested on Sunday for drugging and raping Englehardt and appeared in court on Monday. If the toxicology report shows that the cause of death was an overdose, they could also be charged with her death.

One white woman dead and two black men have been charged with drugging and raping her. According to the police report, after they robbed Eckhardt, they left her in the hotel room “‘without any concern for her welfare or safety.”

Those sound like pretty hateful acts. Do you think the left will agree?

CLASH POLL: Will The Left Label This As A 'Hate Crime'?