Just last year the strident, young “Democratic Socialist” Congresswoman said that in any other country, she and Biden wouldn’t be in the same party.

During a virtual townhall meeting on Friday, Congresswoman Alexandria Ocasio-Cortez (D-NY) gave the shambling husk of a Swamp Thing currently spending a few hours a day in the Oval Office some props for being willing to be bullied by the far-left wing of the Democratic party.

“The Biden Administration and President Biden have definitely exceeded expectations that progressives had,” Democratic Socialist Ocasio-Cortez said during a virtual town hall meeting.

“A lot of us expected a much more conservative administration.”

“The Biden Administration and President Biden have definitely exceeded expectations that progressives had,” Democratic Socialist Ocasio-Cortez said during a virtual town hall meeting.

“A lot of us expected a much more conservative administration.”
Source: Fox News

The hell you say!

What was the first tip-off… that he seems to be ticking off items on the progressive wish-list one by one?

Is it the idea that there is no problem too big that can’t be solved with more funding?

AOC’s sudden priase is a far cry from this moment: 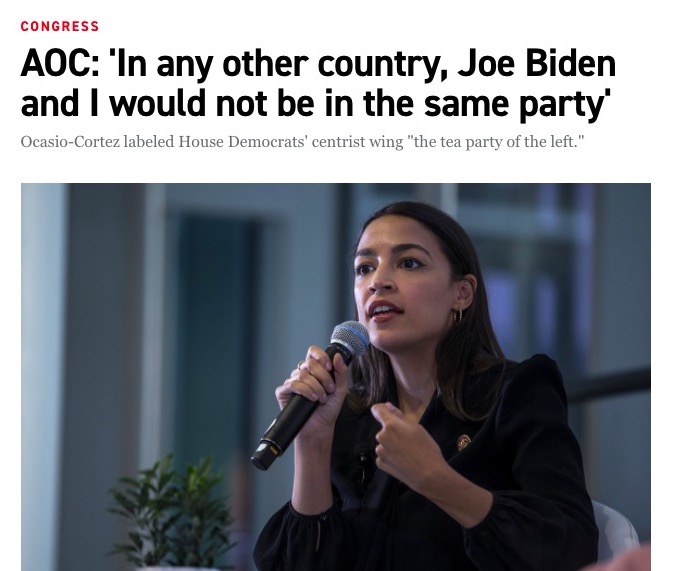 It’s kind of hilarious that Biden is suddenly concerned about the “systemic racism” embedded within the institutions — including the government that he has been a part of since 1972.

On Sunday, House Minority Leader Rep. Kevin McCarthy (R-CA) was on Fox News Sunday and told Chris Wallace that Biden baited Americans as a bipartisan leader, but has switched to socialist ideals.

Rep. McCarthy is not the only one to notice that Biden’s policies have made an about-face from the promised “unity” candidate to kowtowing to the far-left of his party.

Michael Goodwin in the New York Post wrote about the stark differences between the “old” Biden and the “new” Biden.

On the surface, it seems an odd question about a 78-year-old man who has spent nearly 50 years in Washington. But the new Biden, the President Biden, doesn’t sound and act like the former senator and vice president.

In fact, this Biden is so dramatically different that it’s not clear if we should take him either seriously or literally.

Who the hell is this guy?…

…the new Biden is not the result of evolution. Rather, his radical views on race, government institutions, climate change and criminal justice represent such sudden, wholesale reversals that they invite skepticism about his sincerity and whether he is fully in charge of his faculties.

Does he really believe these things, or are they convenient lurches as he tries to keep up with the “woke” wingnuts who dominate his party in Washington? Does he recognize the implications of his sweeping condemnations of law enforcement and white Americans?
Source: New York Post

If AOC and her “comrades” are happy with Biden, he sure as hell isn’t that “unity” candidate that was promised.