Dems keep looking for scandals they can report about Republicans, while carefully ignoring the big ones that can hurt their team.

The media have long since given up being watchdogs hostile to both parties and have become guard dogs, protecting their guy in office… and attacking his rivals.

They’ll entertain any number of wild accusations against anyone with an R after their name, but find themselves absolutely incapable of mentioning names like Juanita Broaddrick or Tara Reade.

Even so, every now and then a name comes up that’s hard to avoid. Harvey Weinstein was one… but they stopped talking about him as quickly as they could, hoping we’d all forget how pivotal he was to Democrat fundraising efforts, generally, and Hillary’s in particular. Ed Buck got a similar veil of silence.

Epstein, on the other hand, was too big a story to suppress. He was strangled in prison — either by his bedsheets or someone with the conviction that ‘dead men tell no tales’.

Democrats try to play up a Trump connection. But Trump kicked him out of the club a long, long time ago, and nobody has yet connected his name to Epstein’s infamous Lolita express… or the island.

Bill Clinton, on the other hand, is a different story. His name has appeared on that manifest quite a few times… but this week, we’re seeing something we hadn’t known about before. Photos of Epstein’s private tour of the White House — courtesy of Slick Willy.

And did you notice who he brought as his +1 in the red? 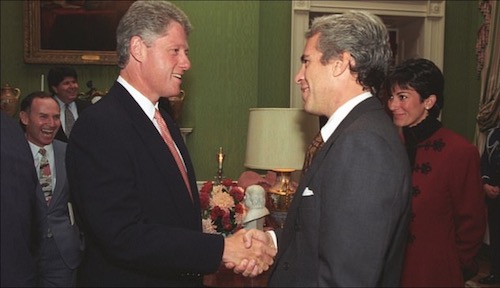 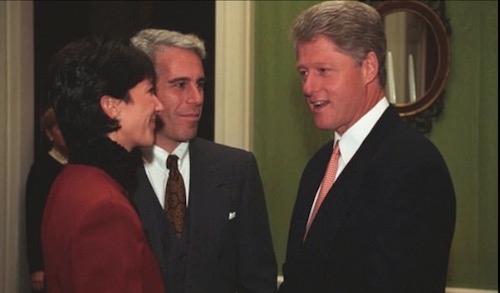 How appropriate that a visit from Epstein and Ghislaine Maxwell smiling and yukking it up with Bill is available at his Presidential library.

It provides historical context and framing as a piece of history.

REVEALED: Photos Of Smiling Bill Clinton Getting A Massage From One Of Epstein’s Victims

Did Bill Clinton Have An Affair With Jeffrey Epstein’s ‘Madam’ Ghislaine Maxwell? A New Book Claims That He Did…