This story serves up a steaming hot cup of schadenfreude.

Yes, taking pleasure in the suffering of others is usually petty and small. It speaks ill of the person enjoying it.

But sometimes, seeing an insufferable blowhard who pretends to be better than ‘ordinary people’ crash and burn carries a sense of satisfaction with it. Chalk it up to being human.

For years, we have had to put up with Robert Denero thumping his chest about how he would like to punch out President Trump. 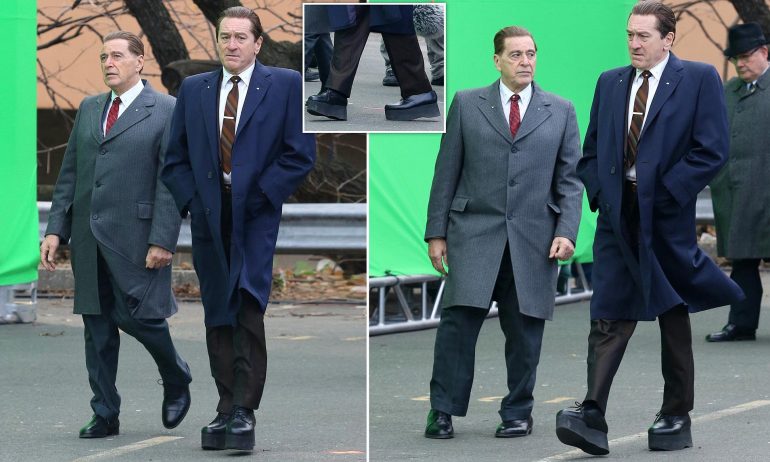 …in his platform shoes, likes to talk tough?

Maybe dial back on those mobster flicks, pal. They seem to have gone to your head. He has no end of invective for Trump or his supporters in red states, either.

That might explain why we feel pretty much ZERO sympathy for the very public humiliation his latest divorce hearings are causing him and his wife.

The latest hearing answered many questions, not least why an actor widely regarded as one of the finest of his generation keeps making such utterly dreadful films.

According to his lawyer, Caroline Krauss, the star of Taxi Driver, Mean Streets and The Godfather: Part II nowadays makes howlers such as Dirty Grandpa and Little Fockers, not to mention commercials for baker Warburtons and car-maker Kia, because he has to pay for 66-year-old Ms Hightower’s extravagant spending habits. ‘Mr De Niro is 77 years old, and while he loves his craft, he should not be forced to work at this prodigious pace because he has to,’ Ms Krauss said.

‘When does that stop? When does he get the opportunity to not take every project that comes along and not work six-day weeks, 12-hour days so he can keep pace with Ms Hightower’s thirst for Stella McCartney? He could get sick tomorrow, and the party’s over.’

…On top of Ms Hightower’s rocketing financial demands, Ms Krauss revealed De Niro owes millions in unpaid taxes. She said the income from his next two films will be devoted to paying off this debt, which in 2015 was revealed to be $6.4 million (£4.6 million).

Naturally, the Hightower camp hasn’t taken all this sitting down. Her lawyer, Kevin McDonough, countered that his client was owed payments to ‘maintain the status quo’ lifestyle she enjoyed with De Niro during their marriage.

And the actor’s own habits, he claimed, have not been cut back at all. ‘When Mr De Niro goes to brunch on Sunday in Connecticut, he charters a helicopter up there,’ he claimed. ‘When he flies down to see his friends in Florida . . . it’s a private jet.’ — DailyMail

Chartering a helicopter for brunch, Bobby, or a private jet to Florida? That sounds very environmentally unfriendly.

No wonder he’s fine with pushing for a government that will raise everyone’s taxes. He can afford helicopter trips, and lavish monthly expenses, but can’t be bothered to pay his own taxes.