Until the world’s most bizarre plague — quarantining the healthy — came out to wreak havoc on the world economy, Trump had China on the ropes, economically.

America’s economy was roaring, manufacturing was being repatriated, and we were in the driver’s seat in terms of trade with China.

A little more than a year later, and Joe Biden sits behind that same desk. China’s economy has been roaring, while the rest of the world has been conditioned to cower in fear until deliverance may (?) finally arrive in the form of vaccines…

Unless of course, Little Lord Fauci instructs us that the time to be brave and return to life as we knew it needs to wait ‘just a little longer’. Just another fifteen days, perhaps?

Between Biden’s broken border, their so-called ‘infrastructure’ spending, an enormous Democrat wish-list lavishing money on the Democrat base, and people who aren’t even lawfully in the country while the rest of the country gets stuck with the bill and all the other big-ticket dreams Dems want to ram down the nation’s throat, nobody has been asking how America could possibly follow the Venezuela blueprint without facing any of the same consequences as Venezuela. (Or Zimbabwe, or Weimar Republic, etc)

This is exactly the sort of issue the Biden family’s financial connections to China raised red flags about. THIS kind of red flag: 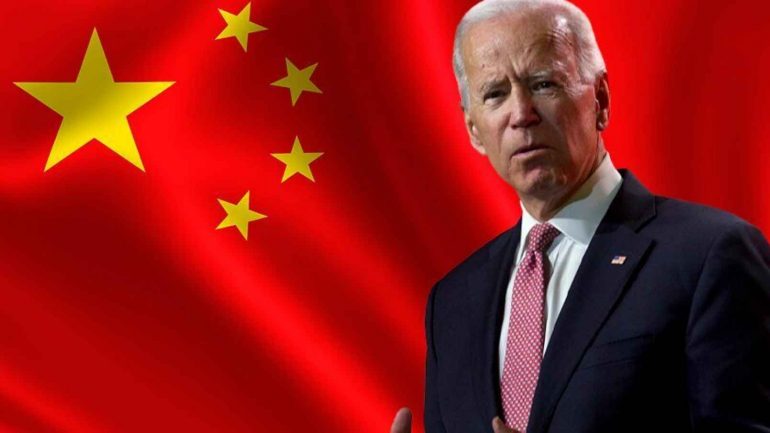 We keep printing money thinking that being the world’s default currency will keep us safe from any negative consequence forever. (See: 9 page PDF in which Harvard prof evaluates the feasibility Modern Monetary Theory) Spoiler alert: that plan doesn’t work.

While we are busy printing money and devaluing the dollar, investors have noticed the negative effect all of that printing has been having on their returns.

Since Jan. 1, Chinese government bonds were relatively flat in terms of returns from Jan. 1 through the end of March. In contrast, the Bloomberg Barclays U.S. Treasuries Total Return index fell 4.2 percent during the same period.

“China’s emergence as a new and credible safe haven destination for bondholders should gradually chip away at the status of the dollar and U.S. Treasuries as the only safe place to hide,” Gustavo Medeiros, deputy head of research at Ashmore Group, recently told Bloomberg. Ashmore is an emerging market investment firm with almost $100 billion in assets under management as of Dec. 31, 2020.

The Chinese option has its own issues, too. But does that mean it’s wise to deliberately immolate our own economy and take that chance?

Do you remember the famous Hemmingway quote about bankruptcy from The Sun Also Rises?

“How did you go bankrupt?”
Two ways. Gradually, then suddenly.”

The world looked on as Venezuela under leadership with exactly the same political mindset as Bernie Sanders and AOC (who, like their Maduro have been driving the bus behind so much of this unaccountable spending) went from being the jewel of South America, to having no food, no running water, hospitals with no medical supplies, and eating stray animals just to survive while a jackboot dictator grinds his people into the dust in only a few short years.

One headline pegged Venezuelan inflation at the unimaginable number of 10 Million percent.

Before their crisis, the people of Venezuela could never have believed it could happen there. They just elected the guy who promised the free stuff.

Are we still so arrogant as to believe that deliberately cratering our own economy in exactly the same way couldn’t possibly do the same thing to us?

Or was destroying America the point all along?

It sure would fit with the ‘America is evil’ narrative they’ve been pushing down our throats, wouldn’t it?

Maybe we should give some serious thought to the destination before starting down a road we might not be able to come back from, eh?

History is littered with ‘once-great’ empires that are a shadow of their former selves. It would be a damn shame for us to discard this one so quickly.