Have you ever had a nightmare where you show up to work naked? One Canadian politician lived out that nightmare on Wednesday…

Liberal Member of Parliament, William Amos, didn’t seem to notice the light that was on. In a very embarrassing moment, Amos appeared completely nude in front of his colleagues during a hybrid virtual/in-person session of Question Period on Wednesday.

The Members of Parliament (MPs) who are not physically present in the House of Commons join in via Zoom and are only supposed to appear on-screen when they are speaking. That didn’t happen in this case.

Veteran journalist Brian Lilley posted a screenshot of the very naked MP with an extremely fortunate phone placement that prevents the photo from being X-rated. At the time, Amos had not been identified as the accidental streaker and Lilley was getting Twitter’s help in I.D.ing the unfortunate politician.

Anyone recognize this MP wandering around in the buff in their office while taking part in the hybrid Parliament? Obviously, given the flag, they are from Quebec. Wonder what kind of mobile phone he uses? #cdnpoli pic.twitter.com/HWOeR9ZJBV

It’s been a year now. How does this keep happening? When the little light is on, your camera is on! How difficult is this?!

MP William Amos was first elected to the House of Commons in 2015 and represents the riding of Pontiac in the province of Quebec. Mr. Amos is currently serving as the Parliamentary Secretary to the Minister of Innovation, Science, and Industry, and is also a member of the Standing Committee on Veterans Affairs.

Here is a screenshot of a fully-clothed Amos during a Facebook live video on Tuesday. 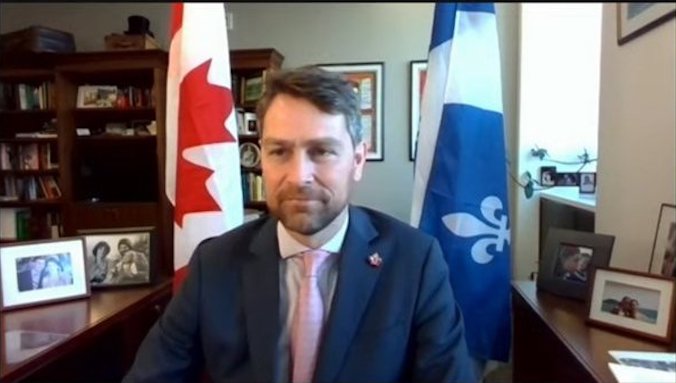 One of Mr. Amos’s colleagues, MP Claude DeBellefeuille, a member of the Quebec separatist party, the Bloc Quebecois addressed the Speaker of the House with a Point of Order related to the incident. She wanted the Speaker to remind MPs that there is a dress code for the House.

DEBELLEFEUILLE: Since the beginning of the pandemic, you have repeated many times the importance of respecting decorum and dress code. I think that this, today, we have beaten — we have set a new record. We’ve seen a Member during Question Period improperly dressed — that is, uh… unclothed. So perhaps remind the Members, especially the male Members that suits and ties are appropriate — or rather called for. We have seen that the Member was in very good shape, but I think that this Member should be reminded of what is appropriate and to control his camera. Thank you.

Here is Ms. DeBellefeuille saying this very thing in the House of Commons.

“I think that this, today, we have beaten— we have set a new record. We’ve seen a member during Question Period improperly dressed — that is, uh… unclothed.” pic.twitter.com/a3fProg7q7

It seems a bit sexist to comment on his fitness level, but…I guess it’s fine because it was a woman that said it, right? Who can keep up on what is and is not acceptable, especially when it’s in reference to a naked Parliamentarian on Zoom.

Also, the number of times that she said “Member” and “male Member”…

Conservative Member of Parliament, Michelle Rempel Garner, was criticized for looking “unprofessional” after she wore a high-necked bodycon dress in Parliament, joked about Amos’s situation on Twitter.

Will, there’s a white dress in my office that you can have (warning: it caused a bit of a stir) if you’re really desperate for an “in case of emergency” outfit. 😉

Here is Rempel Gardner wearing the white dress that had her trending on Twitter back in August: 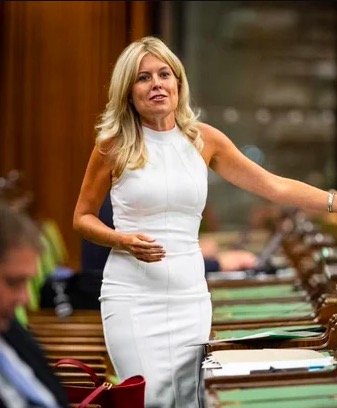 Actually, that’s quite a lovely dress. What’s the big deal? She looks great. It’s not like she’s showing up naked…

This brings us back to Amos…

The embarrassed Member of Parliament later issued a statement and explained what had happened — he accidentally left his camera on while he was changing into his work clothes after going out for a jog.

He wrote, “I made a really unfortunate mistake today & obviously I’m embarrassed by it. My camera was accidentally left on as I changed into work clothes after going for a jog. I sincerely apologize to all my colleagues in the House. It was an honest mistake + it won’t happen again.”

I made a really unfortunate mistake today & obviously I’m embarrassed by it. My camera was accidentally left on as I changed into work clothes after going for a jog. I sincerely apologize to all my colleagues in the House. It was an honest mistake + it won’t happen again.

This could have been avoided if he just made sure that the little camera light was off before he stripped down to his birthday suit.

This guy is from the governing party and makes laws in Canada. Now you know why things are such a mess up there — Canadian lawmakers can’t even work a Zoom call properly.

Good luck, Canucks! It looks like you’ll need it!