[Editor’s note: When reading ClashDaily on a mobile device, you can find the other stories Big Tech might be throttling by swiping left or right.]

While the world waited for the verdict in the Chauvin trial to be announced, police responded to a 9-1-1 call involving a knife. It ended tragically. It will undoubtedly be politicized and racialized.

Within hours of the event, in an attempt at transparency, police have already released the bodycam footage of the event.

In this case, the phrase ‘it all happened so fast’ is exactly the right way to describe it.

The first 4 seconds of this video are the ‘graphic content’ warning, and you see the officer arriving at the front yard asking the open-ended question, ‘what’s going on?’

A flurry of movement comes in his direction from behind the cars. There is a scuffle. Someone gets knocked down by the seven second mark. Others are still engaged.

‘Hey, hey, hey,’ the officer says, drawing his firearm. ‘Get down. Get down.’

That was the 10-second mark. Six seconds after the video began rolling, after the officer arrived on scene.

One guy kicks at torso or head of the girl who had fallen on the ground (which may or may not have connected) while the two remaining participants in the chaos remain engaged a few feet away by the car.

A girl in jeans ignored the ‘get down’ order by the cop, chasing after the girl in pink.

We are now at the eleven second mark. The girl in pink is backed up against the hood of the car, leg raised to try to keep the girl in jeans from closing the distance.

This is the moment when a critical decision needs to be made.

In that moment, here is what he sees: 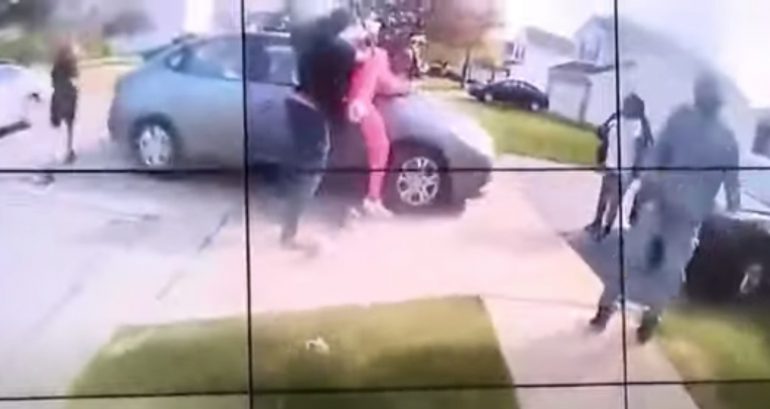 The officer makes the call and discharges his weapon four times. The shots were, sadly, fatal.

What is the rest of the story?

The events, in Columbus Ohio, were reported in the Dispatch:

The video shows an officer approaching a driveway with a group of young people standing there. In the video, it appears that the 16-year-old, identified now as Ma’Khia Bryant, who was moments later shot by police, pushes or swings at a person, who falls to the ground.

Bryant then appears to swing a knife at a girl who is on the hood of a car, and the officer fires his weapon what sounds like four times, striking Bryant, who died a short time later.

Police received a 911 call at 4:35 p.m. about an attempted stabbing on the 3100 block of Legion Lane, which is located north of Chatterton Road. The caller reported a female was trying to stab them, then the caller hung up.

Officers responded to the scene and at 4:45 p.m. an officer-involved shooting was reported.

Columbus Fire medics were cleared to come into the scene at 4:46 p.m., police said. The wounded person was transported in critical condition to Mount Carmel East hospital, where she was pronounced dead at 5:21 p.m., police said.

…Hazel Bryant told The Dispatch that she is the aunt of Ma’Khia Bryant. The girl lived in a foster home there on Legion Lane and got into an altercation with someone else at the home, she said.

Bryant said her niece had a knife, but maintained that the girl dropped the knife before she was shot multiple times by a police officer. — Dispatch

The usual activists wasted no time in claiming this was the intentional murder of black people by police. Racism, of course. They reached this conclusion with exactly two data points, which is all they ever need.

1) The deceased citizen was black.
2) The person who shot her was a policeman.

One wonders how the agitators would have responded if the cop had done something else.

Would the narrative have been any less incendiary? Or would it have centered on how he failed to protect the life of a black girl?

There is a grave danger in turning each of these encounters into a lose-lose situation for the police. Nobody will want to serve and protect anymore.

And then the only remaining option for police will have to a nationalized force. That option has some serious negative ramifications of its own. How many can you think of?