This chick is a poster girl for why the apostles warned about idolatry and false teachers.

It wasn’t so long ago that this column was warning that the woke left was offering a counterfeit gospel when they buy into the language of Critical Race Theory and ‘anti-racism’. If you missed it, you can find it here: HEY CHRISTIANS: Does YOUR Church Condemn This ‘Woke’ Heresy… Or Are They SEDUCED By It?

One hard-core leftist theology prof has volunteered to step up and prove our point.

She’s neck-deep into all the Intersectional Feminism language and belief, framing life in the explicitly marxist terms of oppressor and oppressed, where you are seen as part of your group, not an individual made in the image of God.

As we’re about to see, that thinking brings us down some dark paths. But, for proper context, here’s a little more about the woman whose ‘prayer’ we’re going to put through the wood chipper. This isn’t just some social media rando, or a self-published hack putting his name on a book, and putting it in a Christian Bookstore.

This chick’s prayer wound up taking up space in a NYT best-seller.

Dr. Chanequa Walker-Barnes is associate professor of practical theology, teaching courses in pastoral care and counseling, spiritual formation, and reconciliation studies….She later earned her M.Div. from Duke University. With her unique background in behavioral health, theology, and race/gender studies, her work focuses upon identifying and healing the individual and societal legacies of racial and gender oppression.

Dr. Walker-Barnes is the author of Too Heavy a Yoke: Black Women and the Burden of Strength (2014) and I Bring the Voices of My People: A Womanist Vision for Racial Reconciliation (2019).

..Beyond the classroom, Dr. Walker-Barnes spends most of her professional energy writing and ministering to clergy and faith-based activists. Her faith has been shaped by Methodist, Baptist, and evangelical social justice communities as well as by Buddhism and Islam. She is an ecumenical minister, ordained by an independent fellowship that holds incarnational theology, community engagement, social justice, and prophetic witness as its core values. —Mercer University

She wrote a ‘prayer’ that spanned several pages in a purported devotional entitled ‘A Rythm Of Prayer’. When she got called out for it, she tried to claim it was ‘imprecatory prayer’ like in the psalms.

Guess again, crackpot. Our readers won’t be so easily fooled by that dodge, as they already know a thing or two about imprecatory prayer:
Example 1 … Here Are The Prayers Control-freaks Don’t Want You To Pray
Example 2… PRAYING CURSES ON GOD’S ENEMIES: The Imprecatory Prayers

On Saturday, one of the members of my church sent me these images of a “devotional” she found in Target. This kind of thinking is a direct result of CRT and is completely anti-biblical. I shared the first page on Saturday but let me now share the whole thing for context: pic.twitter.com/oiRxHQXY53

Here are the photos from the book: 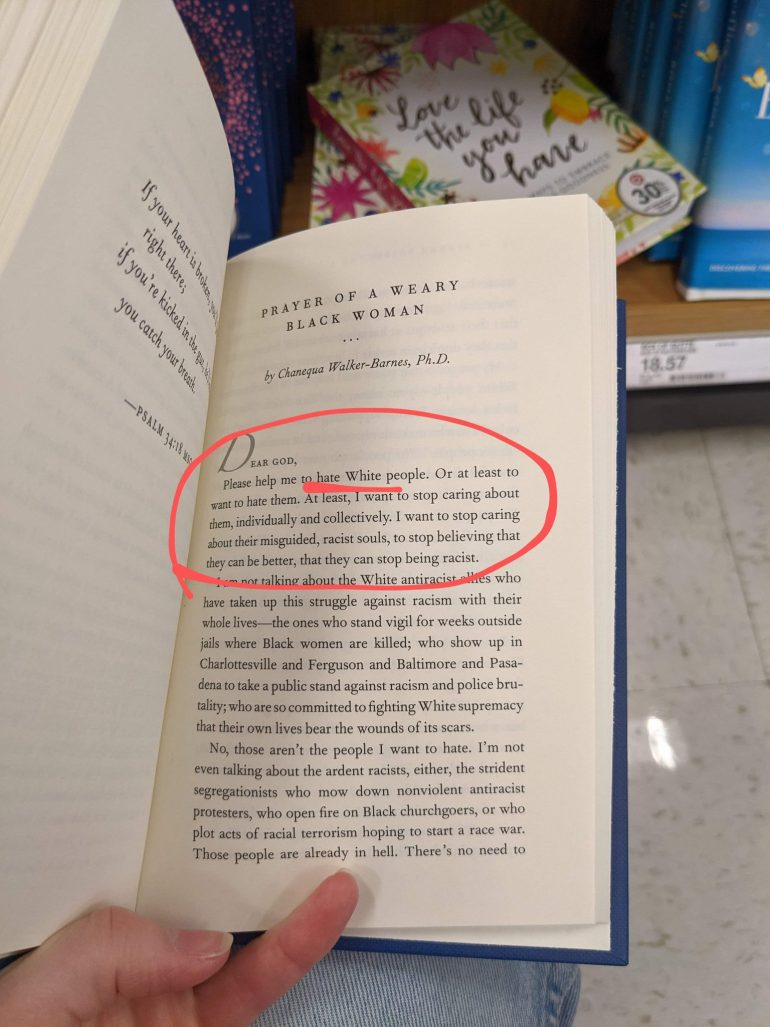 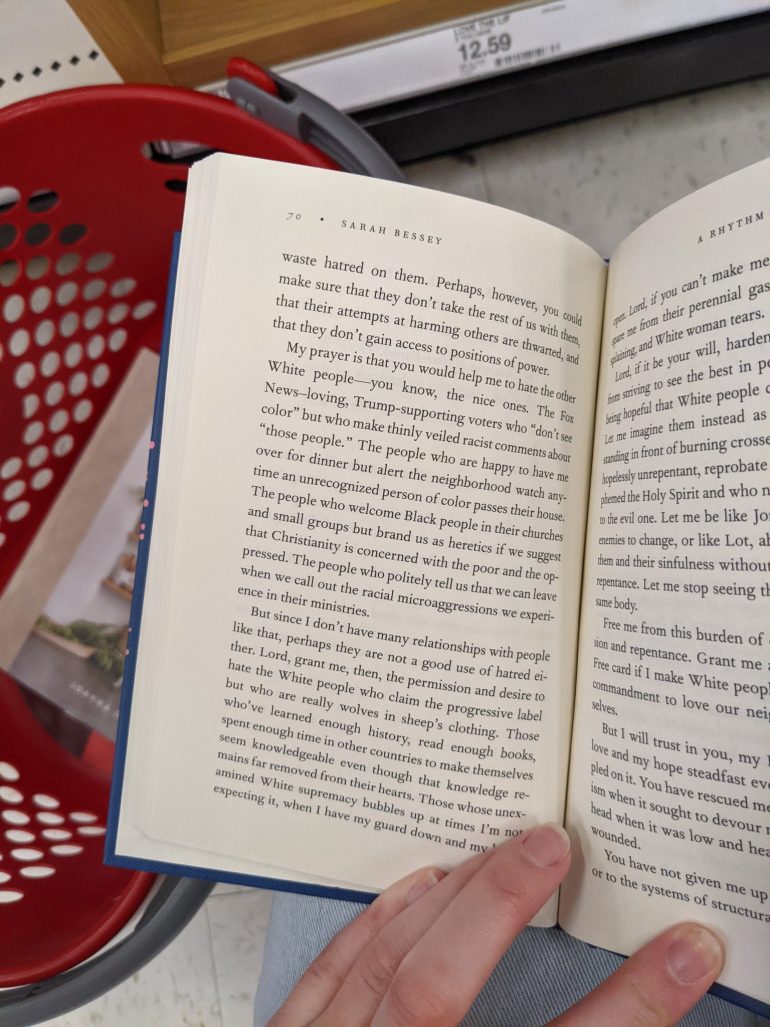 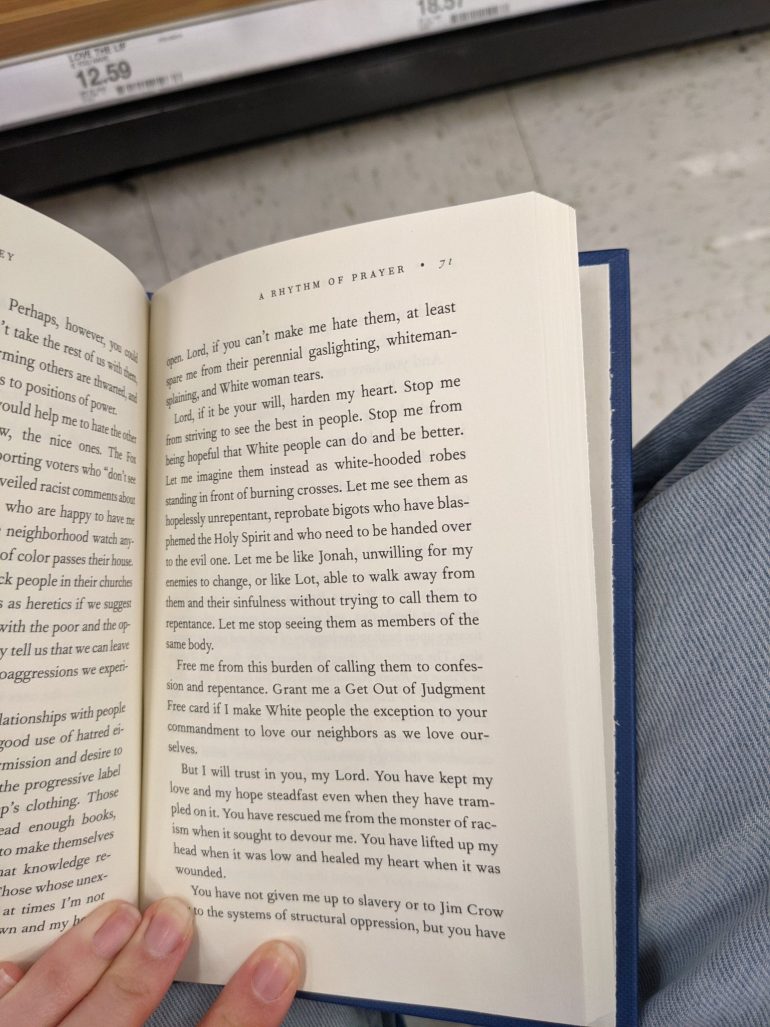 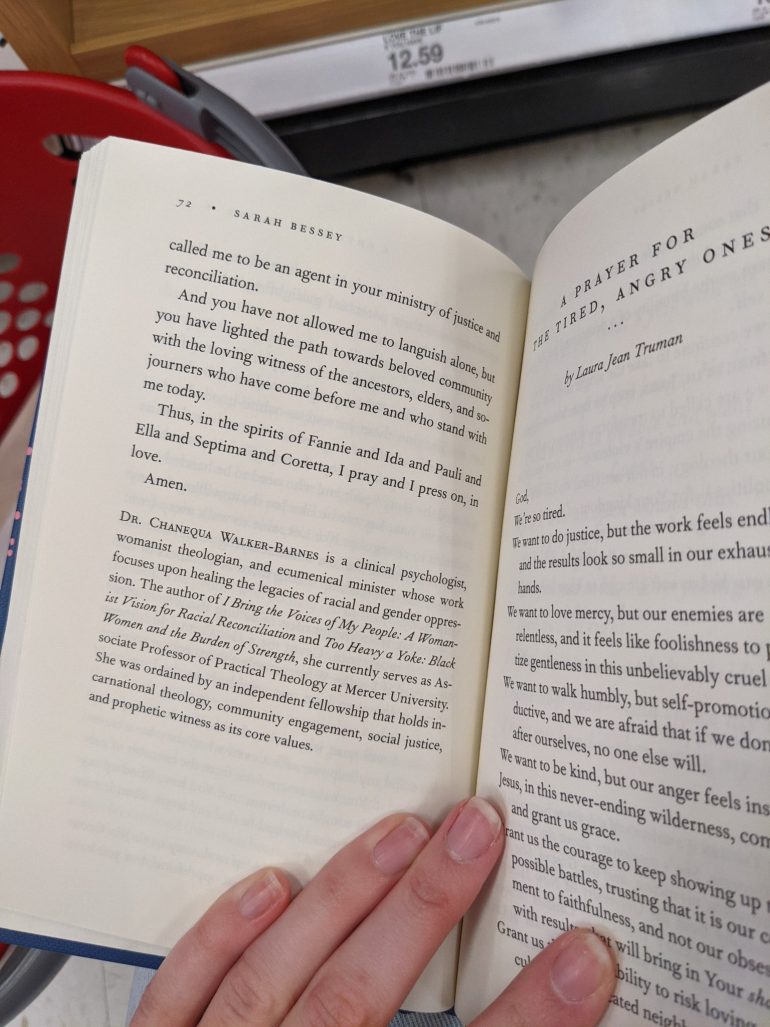 [We have attached the full text at the bottom so you can see for yourself exactly what she wrote.]

We read it. Yikes. It was even worse than we expected.

What a seething load of utter self-indulgent, horse crap.

Well, to begin with, a gospel that saves from political problems, the ‘monster of racism’, and ‘Jim Crow’ rather than the corruption of our own heart that makes us stand guilty before a holy God is no gospel at all.

Second, her prayer is not the imprecatory prayer of the Psalms. Its reeks of the same self-righteous condemnation of others as the Pharisee’s prayer in Christ’s parable. In case you were unsure, the pharisee was NOT the hero in that story.

This whole letter is seeking permission to sin, and dressing it up as righteousness. Jesus had pretty strong language for what it meant to hate someone in your heart. It was the same as murder. And she wants God to grant her permission to hate people.

Her religious outlook is entirely self-centered, expecting other people to be reconciled to God on HER terms, to be accepted as Christian — or even human — (or not) based on how they treat her.

She wants to be MORE like Jonah, as he was in his pride and rebellion when he was specifically reprimanded by God for having too hard a heart, deciding ‘those’ people did not ‘deserve’ divine mercy.

Christ called both Roman collaborators and ‘zealots’ (Jewish Separatists) to work together as His Twelve.

He told the parable of the good Samaritan, showing that racial animus was NOT to take priority of the duty to love.

Maybe she can’t see a white guy as a ‘brother in Christ’ (if, in fact, she has ever met the true and not the political secular counterfeit). Jesus covered that, too, leaving no means of escape, commanding us even to love our enemies and pray for those who persecute you.

If you think there’s a ‘get out of judgment free’ card for blowing this off? We have another of Jesus’ own parables to point you to.

Do you remember the one about the guy who owed his master a great debt, and was forgiven, only to turn around and refuse to forgive that debt of his fellow-servant?

Then summoning him, his master said to him, ‘You wicked slave, I forgave you all that debt because you pleaded with me. Should you not also have had mercy on your fellow slave, in the same way that I had mercy on you?’ And his master, moved with anger, handed him over to the torturers until he would repay all that was owed him. My heavenly Father will also do the same to you, if each of you does not forgive his brother from your heart.” Matthew 18

Instead of worrying about all the sins someone else may be guilty of (judge not lest you be judged) a concerned Christian is better served by plucking the ‘plank out of his own eye’ than by looking for the sins in others.

She claims to love God. Is that so?

Then let’s see her square her alleged love of God with the plain-spoken reality of this verse:

If a man say, I love God, and hateth his brother, he is a liar: for he that loveth not his brother whom he hath seen, how can he love God whom he hath not seen? — 1John4:20

The Full Text of this woman’s ‘prayer’ is below.

We’ll give you the full context so you can judge for yourself just how bad it was. (We have highlighted a few parts in bold.)

I’m not talking about the White antiracist allies who have taken up this struggle against racism with their whole lives — the ones who stand vigil for weeks outside jails where Black women are killed; who show up in Charlottesville and Ferguson and Baltimore and Pasadena to take a public stand against racism and police brutality who are so committed to fighting white supremacy that their own lives bear the wounds of its scars.

No those aren’t the people I want to hate. I’m not even talking about the ardent racists, either, the strident segregationists who mow down nonviolent antiracists protesters, who open fire on Black churchgoers, or who plot acts of racial terrorism hoping to start a race war. Those people are already in hell. There’s no need to waste hatred on them. Perhaps, however, you could make sure that they don’t take the rest of us with them, that their attempts at harming others are thwarted, and that they don’t gain access to positions of power.
My prayer is that you would help me to hate the other White people — you know, the nice ones. The Fox News-loving, Trump-supporting voters who ‘don’t see color’ but who make thinly veiled racist comments about ‘those people’. The people who are happy to have me over for dinner but alert the neighborhood watch anytime an unrecognized person of color passes their house. The people who welcome Black people in their churches and small groups but brand us as heretics if we suggest that Christianity is concerned with the poor and the oppressed. The people who politely tell us that we can leave, when we call out the racial microaggressons we experience in their ministries.
But since I don’t have many relationships with people like that, perhaps they are not a good use of hatred either. Lord, grant me, then, the permission and desire to hate the White people who claim the progressive label who’ve learned enough history, read enough books, spent enough time in other countries to make themselves seem knowledgeable even though that knowledge remains far removed from their hearts. Those whose unexamined White Supremacy bubbles up at times I’m not expecting it, when I have my guard down and my (heart?) open. Lord, if you can’t make me hate them, at least spare me from their perennial gaslighting, whitemansplaining, and White woman tears.
Lord, if it be your will, harden my heart. Stope me from striving to see the best in people. Stop me from being hopeful that White people can do and be better. Let me imagine them instead as white-hooded robes standing in front of burning crosses. Let me see them as hopelessly unrepentant, reprobate bigots who have blasphemed the Holy Spirit, and need to be handed over to the evil one. Let me be like Jonah, unwilling for my enemies to change, or like Lot, able to walk away from them and their sinfulness without trying to call them to repentance. Let me stop seeing them as members of the same body.
Free me from this burden of calling them to confession and repentance. Grant me a Get Out Of Judgment Free card if I make white people the exception to your commandment to love our neighbors as we love ourselves.
But I will trust in you, my Lord. You have kept my hope steadfast even when they have trampled on it. You have rescued me from the monster of racism when it sought to devour me. You have lifted up my head when it was low and healed my heart when it was wounded.
You have not given me up to slavery or to Jim Crow or to the systems of structural oppression, but you have called me to be an agent in your ministry of justice and reconciliation.
And you have not allowed me to languish alone, but you have lighted the path towards beloved community with the loving witness of the ancestors, the elders, and sojourners who have come before me and who stand with me today.
Thus in the spirits of Fannie and Ida and Pauli and Ella and Septima and Coretta, I pray and press on, in love.
Amen.