Considering the amount of work involved in this smear campaign, the Washington Post must’ve been sitting on this waiting for the right moment for some time.

Here at ClashDaily we often say that the Corporate Media — or the newly-coined term “Regime Media” — is irreparably damaged and is essentially the propaganda arm of the Democratic Party. Former President Trump called the dishonest, slanted coverage “fake news” and said that it was “the enemy of the people.”

The latest piece by Washington Post’s “fact checker” appears to reinforce these claims.

Glenn Kessler, the Editor and chief writer of Washington Post’s Fact Checker column decided to run a hit-piece on Sen. Tim Scott, the only black Republican Senator, the day after it was announced that he will deliver the GOP response to Joe Biden’s first address to Congress. Of course, he disguised it as a “fact check” of one of Sen. Scott’s signature lines, that his family went “from cotton to Congress in one lifetime.”

Senator Scott often talks about his family history and how his grandfather dropped out of school in third grade, never learned to read, and was forced to pick cotton. Yet, he lived long enough to see his grandson become the first African American to elected to the House of Representatives and then the Senate.

It’s an inspiring story and shows the reality of the American Dream is attainable for all Americans.

Senator Scott did mention that same inspiring “cotton to Congress in one lifetime” story in his 2020 RNC speech.

WaPo decided that now was the right time to “fact check” Scott’s story.

They took issue with Scott’s framing of the story of his grandfather, Artis Ware, leaving elementary school to pick cotton. That’s because Scott’s great-great-grandfather, Lawrence Ware, once owned 900 acres in South Carolina, which Scott has openly acknowledged.

The Washington Post dug into South Carolina census records from the 1800s and death certificates “to close this gap in Scott’s narrative.”

What did the “fact checker” find?

Our research reveals a more complex story than what Scott tells audiences. Scott’s grandfather’s father was also a substantial landowner — and Scott’s grandfather, Artis Ware, worked on that farm. Scott’s family history in South Carolina offers a fascinating window into a little-known aspect of history in the racist South following the Civil War and in the immediate aftermath of slavery — that some enterprising Black families purchased property as a way to avoid sharecropping and achieve a measure of independence from White-dominated society.

WaPo then includes a lengthy chronology explaining who’s who in Sen. Scott’s line, but it all comes down to this… Senator Scott’s great-great-grandfather, Lawrence Ware, managed to acquire a vast amount of land over several decades at a time when it was extremely difficult for a black man to do so.

There are some gaps in the research, but WaPo “believes” that they have managed to piece the story together.

By 1910, Lawrence Ware had a farm, a home mortgage-free, and was raising 9 children. One of his sons, Willie Ware, Scott’s great-grandfather, was listed as a “farmer” on the 1910 census who worked on his father’s farm. Willie was 16 years old at the time. Eventually, Willie, father of Artis, was able to own his own farm and his son worked on it when he was young. But WaPo did manage to get that “gotcha!” — Artis Ware was listed as attending school all the way to fourth grade!

So, will this mean that Senator Scott will get 9,000 Pinocchios for his blatant lies about his grandfather’s third-grade only education? Eh, not so much.

Kessler wimped out on his “fact check” by refusing to award any Pinocchios for the “cotton to Congress” line.

Scott’s “cotton to Congress” line is missing some nuance, but we are not going to rate his statements. To some extent, Scott may be relying on the memories of his grandfather, not a detailed examination of records.

Scott tells a tidy story packaged for political consumption, but a close look shows how some of his family’s early and improbable success gets flattened and written out of his biography. Against heavy odds, Scott’s ancestors amassed relatively large areas of farmland, a mark of distinction in the Black community at the time. Scott, moreover, does not mention that his grandfather worked on his father’s farm — a farm that was expanded through land acquisitions even during the Great Depression, when many other Black farmers were forced out of business.
Source: Washington Post

So cute! Can’t wait until they do Hunter Biden! Or maybe the Vice President’s start in politics.

It’s pretty incredible that the Washington Post has the audacity to publish a hit-piece questioning the history of a man who grew up in the Jim Crow south while they’ve breathlessly been calling the Georgia bill on electoral reform the “new Jim Crow” for about a month now. Truly, truly astounding!

This “fact check” was a shameful attempt at a hit-piece by the leftwing media who act as the Praetorian Guard for Democrats. When they come up for air from their boot-licking, they work very hard to take out the opposition. 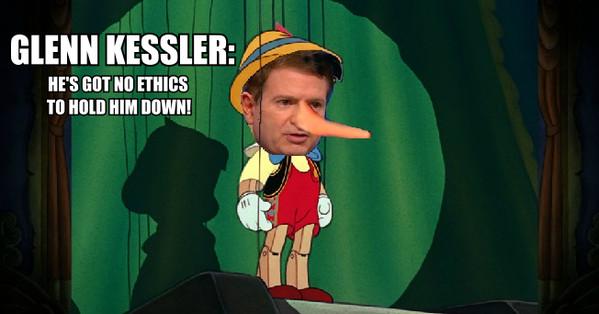 The thing that we all know to be true is that if Senator Tim Scott had a “D” after his name, Kessler would be out on his ass so fast with his cardboard box of half-dead indoor plants and his collection of paperweights that his head would spin.

He’d be walking down to the lobby amid a frothing, zealous mob of 20-something WaPo interns shouting epithets like “racist!” at him in their paroxysms of rage.

But because Senator Scott is a Republican, he “ain’t black” according to the sitting (co-)President of the United States, so those same interns are giving Kessler kudos on their Slack channel.

If only the interns knew…

It would seem that Kessler shouldn’t be so quick to expose problems in family histories because, as always, Jack Posobiec of OANN has the receipts…

. @GlennKesslerWP is the last person who should bring up family histories pic.twitter.com/kZlNR4RxKD

Oh no @GlennKesslerWP this is not good at all! pic.twitter.com/9ymqYpWP1r

It looks like we need a “fact check” on Kessler’s family background, doesn’t it?

UPDATE: Kessler responded to the photo shared above and says that it’s fake.

“Hey guys, that picture is fake! It was my mom’s Nazi uncle that was throwing the Heil Hitler salute at that Nazi funeral! Now leave me alone so I can go back to spending my Nazi inheritance.” https://t.co/A7eEI6PJyZ