Big Tech is clamping down on conservative media big time. Don’t let Big Tech pre-cheaw your news. Sign up for our free email newsletter, and we’ll make sure to keep you in the loop.

To hear Joe Biden regurgitate the talking points, racial minorities will suffer horribly on account of ID requirements. That claim is easily enough tested, though, isn’t it?

That’s exactly what this man-on-the-street interview just did.

First, he asked a bunch of people if they agreed with the talking points — these white liberals, for example, were absolutely convinced of the truth of Democrats’ voter ID is a racist attempt at voter suppression narrative.

Why is that a problem?

Well, for one thing, some of these liberals’ beliefs about minorites was straight-up insulting and condescending.

And for another, when this same interviewer asked real, live black people about this same question, their answers blew that narrative straight to hell. It wasn’t even close.

I love this video so much. So perfectly captures how racist liberals are. pic.twitter.com/uDR4X3iaMp

Does this surprise us? Of course not.

Democrats, for as long as I can remember, have been trying to demonize Republicans rather than engage with our ideas. And their favorite way to demonize us is to claim we hate is to say we wish harm upon whichever ‘oppressed’ group they are trying to deceive. Black, brown, female, gay — it doesn’t matter, they’ve rolled the whole thing up into one big ball of ‘intersectional’ politics, and are happy to unload it on whoever they happen to disagree with. Even belonging to one of those oppressed groups is no defense.

Those people have just ‘internalized’ their oppression… and are self-loathing.

It takes moments of refreshing honesty like this one, where ordinary people talk frankly about how easily they can access voter ID to show the scam for what it is.

And if someone tells you that Voter ID is racist, you can show them this video and call them a liar.

If they STILL won’t believe you, you can show them this photo: 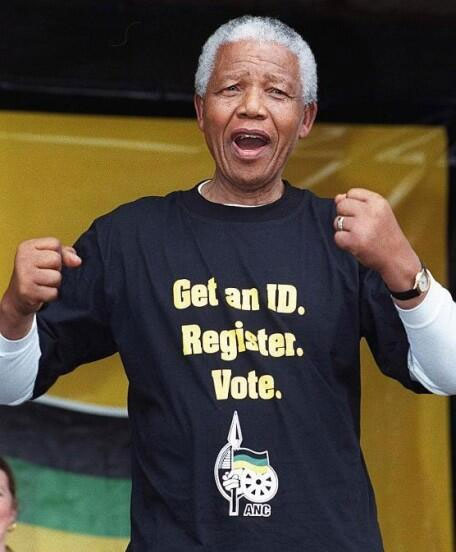 And then you can ask them if Nelson Mandela actually wanted to suppress the black vote. (Fair warning — you may have to help them out a little by explaining to them who Nelson Mandela was.)