Billy Crystal sat down with the New York Post to talk about a new movie he was directing, and the obvious topic of comedy in today’s woke culture came up.

He wouldn’t be the first comic to notice how the culture has become uptight and easily offended. Seinfield, for example, will no longer do shows on campus. There are too many uptight people more interested in fact-checking jokes than being entertained by them. It just isn’t worth it for him anymore.

Considering that Billy Crystal stands among a select few legends in the industry, with comedic chops and improv that could keep up even with the likes of Robin Williams, it’s sad.

What did the enormously talented Billy Crystal say on the topic? He handled it with a refreshing dignity and class that we don’t often see in the uppity Hollywood types anymore.

Here’s a self-referential sample of his humor.

During 2016, Billy Crystal was interviewed in a late night comedy show. Give my love for Princess Bride, they asked him what he’d say to me if he could: “Have fun storming the White House!!” He was then asked “think he’ll win?” His answer? “It’d take a miracle!” pic.twitter.com/MEGW36yyjy

Billy Crystal doesn’t sound too impressed by the current state of comedy and cancel culture.

“It’s becoming a minefield and I get it,” the comedian told The Post. “I don’t like it, I understand it … I just keep doing what I’m doing and that’s all you can do right now.

“It’s a totally different world [now] and it doesn’t mean you have to like it,” he added, with a laugh. — NewYorkPost

The trailer for the movie he went on to discuss is here. (It looks pretty great, to be honest, and is playing around with an original idea. Then again, it IS Billy Crystal we’re talking about.)

As for the interview questions about such a touchy subject, you notice he handled it with class. He’s a professional and we’d expect nothing less from him. But the internet reacted with exactly the kind of empty-headed combination of arrogance, virtue-signaling, hostility, and profanity we have all come to expect. 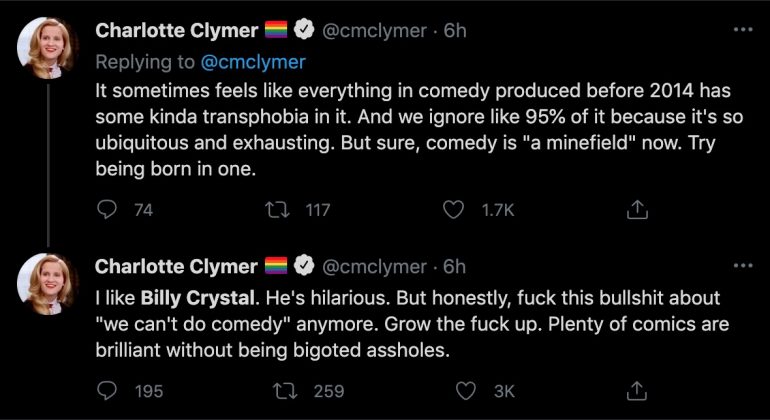 The more they try to suppress the very human instinct for comedy (including transgressive comedy), the more they remind us all who the real authoritarians are.