Be careful what you ask for, you just might get it.

H.L. Mencken once said, “Democracy is the theory that the common people know what they want, and deserve to get it good and hard.”

If his quote about Democracy is true about ordinary citizens, it rings twice as true for the special interest groups who think they were working in their own best interest.

It was for your own good. The U.S. Chamber of Commerce coordinated with a bevy of left-wing activists, unions, and others to “fortify” the 2020 election for Joe Biden. The Chamber is getting the open borders it wants and the soft-on-China policy it wants, all to the detriment of working families. Of course, in the Time recounting of a year-long initiative that pulled every lever of power in the country, the Chamber’s motives were pure, to ensure a fair and unquestionable election. To do this, the Chamber helped to change election laws nationwide, destroying election integrity in multiple swing states and demonizing anyone who questioned the results.

…Yet the U.S. Chamber of Commerce partnered with these progressive groups and somehow expected Biden would not implement those groups’ radical wish list. The proposed energy policies alone should have scared them, but they didn’t. Now, with Biden’s express endorsement of a $15/hour minimum wage, the Chamber has objections: —PJMedia

What was true then about $15/hour minimum wages will also be true about a raft of other hard-left policies.

Here’s the most recent example.

The April jobs report from the Bureau of Labor Statistics showed the economy is adding far fewer jobs than expected, and unemployment rose slightly to 6.1%. This indicates the economic recovery from the coronavirus pandemic is occurring a little slower than hoped.

“The disappointing jobs report makes it clear that paying people not to work is dampening what should be a stronger jobs market,” said Neil Bradley, the Chamber of Commerce’s head of policy.

…”One step policymakers should take now is ending the $300 weekly supplemental unemployment benefit. Based on the Chamber’s analysis, the $300 benefit results in approximately one in four recipients taking home more in unemployment than they earned working,” said Bradley. — WashintonExaminer

That assumes Biden’s people want the same thing that the Chamber of Commerce wants.

For example, DNC talking points are so perfectly parroted by MSNBC that they are often ridiculed as the MSDNC. He’s what it looks like when one of their people weighs in on this issue. (This version includes a nice fish-slapping courtesy of Harmeet Dhillon.) 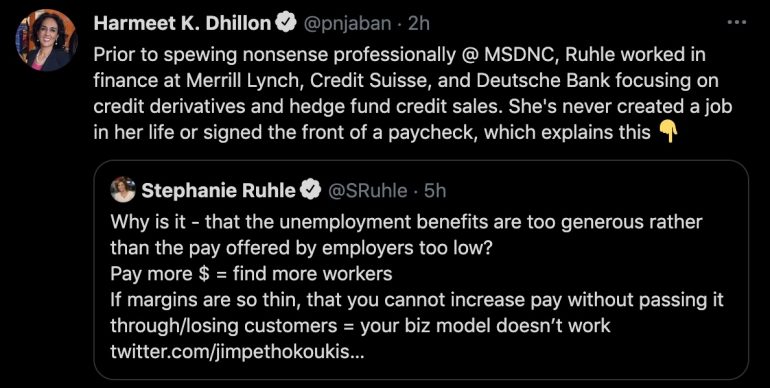 You actively participated in a quid-pro-quo to rig the system last November. You were complicit in ‘fortifying the election’ and pumping up Biden’s chances, to hell with what the electorate had to think about it because you figured Joe’s policies gave you certain perks that Trump wouldn’t.

Now that Biden has proven himself to be exactly who sites like ours have claimed he was, you’re pretending to be shocked that he’s not giving you everything you thought you wanted?

Now that you’ve helped Biden have unchecked power to lay waste to systems and institutions for his petty politics, do you uexpect sympathy now that the guy whose power you helped secure has turned on you?

Go ahead. Hold your breath.