Is it weird that just a few days before Hamas fired more than a thousand rockets all over Israel that an Iranian General warned that Israel was vulnerable to an attack?

It seems like quite a coincidence coming from Iran which is the largest state sponsor of terror who has been quite cozy with Hezbollah, Islamic Jihad, and other terrorist organizations like…Hamas. Iran has provided financial and material support to Hamas and the Palestinian Islamic Jihad.

In an interview that aired on May 5 on Iranian television, Major General Hossein Salami of the Iranian Revolutionary Guard Corps (IRGC) said that Israel has “exposed weaknesses” in its defense and the country could be defeated with one large-scale tactical operation.

Iran’s Islamic Revolutionary Guard Corps commander Maj.-Gen. Hossein Salami warned Israel “could be destroyed” in a single operation, and the Jewish state’s security was crumbling from within.

“The Zionist system is breaking apart, faltering, and crumbling from within. Over the past year and a half, they tried to project a powerful image of themselves, namely inflate themselves like a balloon,” Salami told Iranian state TV on the eve of Quds Day, Iran’s day of rage against Israel…

…“The Israelis have tried to show a figure of authority over the past year and a half and have tried to expand the scope of their evil, while they have [experienced] tremendous damage.”

He continued by saying the U.S. could not help Israel. The U.S.’ foreign policy is “inactive.”

“The balance of power is clearly changing in favor of Yemen, and the Saudis have been hit very hard. None of the Saudi air defense and missile systems, which are all American, are capable.”
Source: Breitbart

Just a few days later, “Palestinian protesters” threw rocks “and other projectiles” at Israeli police from the al-Aqsa mosque during Friday prayers.

This was in response to an ongoing Supreme Court case regarding Palestinian Arab residents facing eviction in Sheik Jarrah in the Old City. The situation is too long to get into here, but Jeff Dunetz at The Lid has a great article for those interested. Here’s the TL;DR — the land never belonged to the Palestinian Arabs, and they were ordered by the courts to pay rent and they didn’t…for years. Now, they’re facing eviction. In response, they’re rioting and now Hamas is attacking Israel…because that’s a totally normal response, right?

The many “useful idiots” on the left like AOC, her anti-Israel “Squad” members, Bernie Sanders, Elizabeth Warran, the Corporate Media, and even the White House use the situation in Sheik Jarrah as a cudgel to hit Israel while sticking their fingers in their ears and singing “la-la-la-la” about the a-hole terrorists who set up military ops in civilian areas and cry about casualties when Israel retaliates.

Israel’s Iron Dome has (so far) largely protected the small country from the barrage of rockets fired into the interior, but there is still the damage, casualties, and the emotional and mental toll of forcing the Israeli population underground while terrorists mount a large-scale attack.

Israel’s Iron Dome is a wonder to behold, but videos like this one somewhat put into perspective the very many and very real threats that Israel faces on a daily basis. We on this island cannot even begin to imagine what the fear must be like. pic.twitter.com/5o5Q7gjfte

Every red dot marks sirens in Israel over the last 30 minutes: Israel is under attack. pic.twitter.com/1CSOFn8NBi

The Jerusalem Post posits that this massive attack is being done to test the limits of the Iron Dome at a time where Israel is vulnerable politically as they sort out the results of the most recent election.

Iran’s IRGC head Hossein Salami warned last week that Israel was vulnerable to one large tactical operation because the country is so small. He pointed to the S-200 fired from Syria near Dimona and other threats to Israel as an example of how vulnerable the country is.

The massive rocket fire launched on May 11, an unprecedented series of barrages targeting Ashkelon, attempting to test the abilities of Israel’s multilayered air defenses, appear to be part of an Iranian-inspired plan. This is because Islamic Jihad, an Iranian proxy, is involved in the rocket fire and because Hamas is backed by Iran.

It isn’t the first time, of course, that these groups have launched massive rocket attacks, or the first time they targeted Jerusalem and Tel Aviv. The unprecedented aspect relates in part to the volume of fire, sometimes more than 100 rockets in several minutes, and also the nature of the concentrated attack on Ashkelon.
Source: The Jerusalem Post

The original Iron Lady, former Israeli Prime Minister Golda Meir, is credited with saying, “Peace will come when the Arabs will love their children more than they hate us.”

We’re apparently not there yet. Hamas doesn’t care who they kill, even if it’s their own people.

In other words, Hamas knocked out power to their own hospitals by misfiring a rocket meant for civilians elsewhere and now they think they deserve a ceasefire?

Israel should finish them https://t.co/UxlLrDefYO

Yes, they should. No other country in the world would put up with ongoing terrorist attacks for so long.

You notice that Hamas didn’t pull this kind of crap for about 4 years or so. Gee, what could’ve changed?

The Bad Orange Man in the White House was replaced by a doddering, hair-sniffing carcass who doesn’t know what the hell is going on and is told what to do.

Then there’s this little nugget from back in March…

The Biden administration privately confirmed to Congress last week that the Palestinian Authority has continued to use international aid money to reward terrorists but said the finding won’t impact its plans to restart funding.

In a non-public State Department report obtained by the Washington Free Beacon, the administration said the Palestinians spent at least $151 million in 2019 on its “pay-to-slay” program, in which international aid dollars are spent to support imprisoned terrorists and their families. Financial statements further indicate that at least $191 million was spent on “deceased Palestinians referred to as ‘martyrs.’” Despite this practice, which violates U.S. law and prompted the Trump administration to freeze aid to the Palestinians, the “Biden-Harris Administration has made clear its intent to restart assistance to the Palestinians in the West Bank and Gaza,” according to the report.

It remains unclear how the Biden administration will restart American aid without violating a 2018 bipartisan law known as the Taylor Force Act, which prohibits the U.S. government from resuming Palestinian aid until the payments to terrorists are stopped. The latest report on the matter is likely to rankle pro-Israel lawmakers in Congress who see the payments as a gift to the Palestinian government as it continues to sponsor terrorism and foment anti-Israel hatred.
Source: Washington Free Beacon (Emphasis Added)

And, (of course,) there’s the ongoing sucking-up to Iran that is distinctive of the Biden-Harris administration.

How’s that pre-Trump Middle East policy workin’ out for ya, Joe? 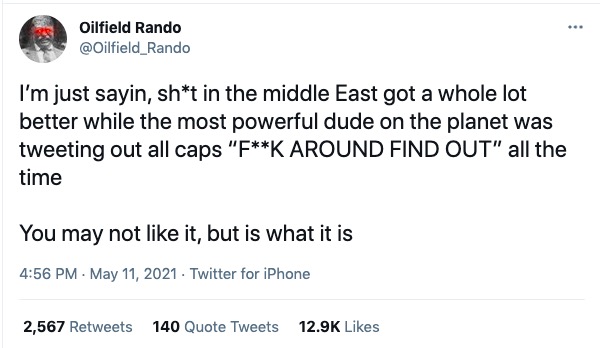 Maybe, just maybe some of those “mean tweets” weren’t such a bad thing after all…