The only question unanswered question is: was the timing of this decision a coincidence, or a consequence?

Only a fool — arrogant or ignorant — thinks you can unleash forces like these on society without any chance that it would someday come for you.

ClashDaily op-eds will sometimes reference Ogden Nash’s poem, ‘The Hangman’ for exactly that reason. The Golden Rule isn’t just some concept for religious moralizers, it is a safety net giving us all the same rules to play by.

If you have taught them to flinch and fear public outcry, you had better not give the public a reason to cry out.

Chrissy Teigen gave them EVERY reason to cry out. Is she now paying the piper? Or was this just an ordinary business decision?

Let’s back up to the controversy itself. Chrissy Teigan is John Legend’s girl, and she believes that everybody deserves to hear her opinion. So she shares it. Loudly and often. That might not be such a big deal, except that she’s not a very nice person.

Endlessly ragging on the President and his supporters? By Hollyweird standards, that by itself would be small-ball. Nobody bats an eye about that. What got her in hot water was something more egregious.

Here are a few tweets to summarize what it is that got her in deep yogurt. 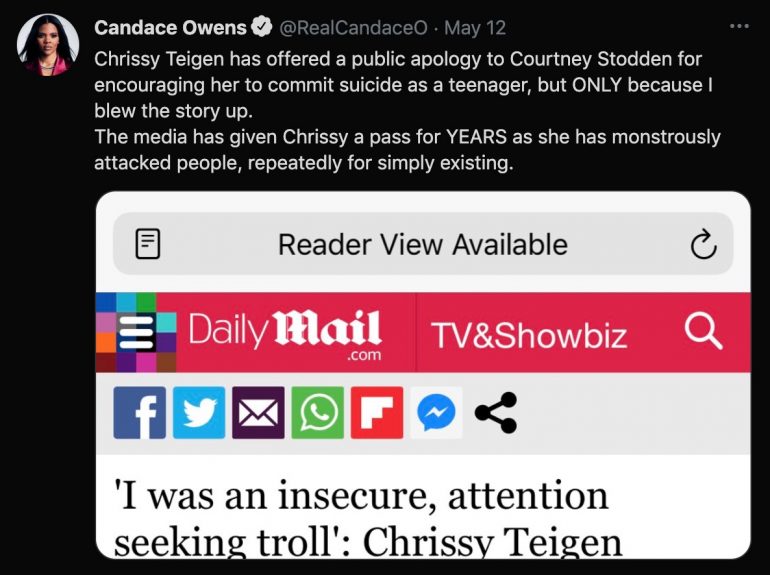 Owens started putting the pressure on, holding the left to their own rules and consequences, clubbing them with their own stick. 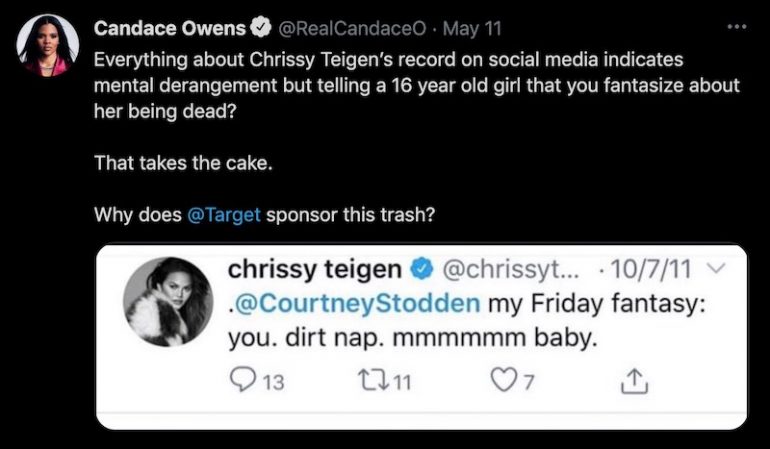 And Candace wasn’t letting her get away with the ‘momentary lapse of judgment’ excuse either. She’s got a well-established track record of being a horrible person more than happy to bask in the suffering of others.

That’s a sign of cruelty. That moves her along the moral scale from less ‘saintly’ to more ‘sociopathic’. 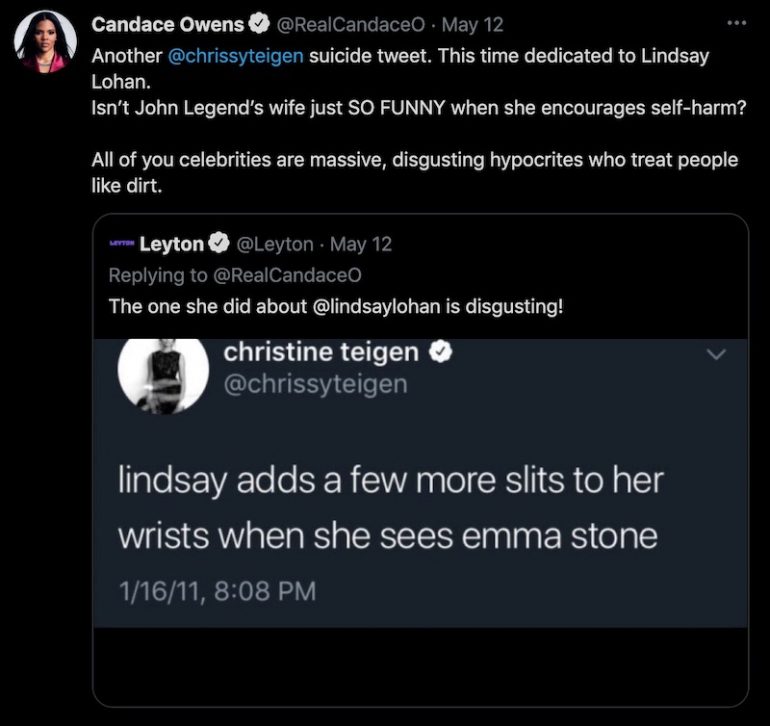 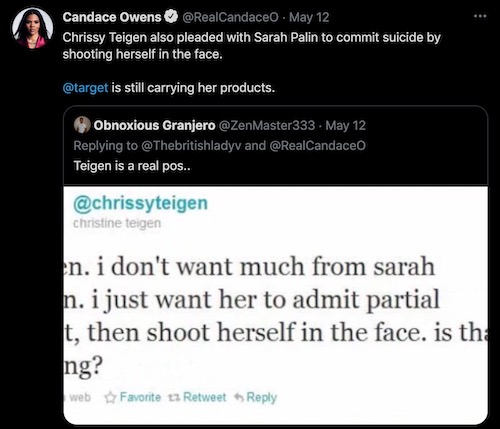 Her dumbassery has finally caught up with her.

At face value, calls for her product line to be pulled from Target being followed by news of her products no longer being stocked at Target might seem like simple cause and effect.

But those of us who still value critical thinking know that correlation does NOT necessarily mean causation.

The official story is that she and Target parted ways some months ago.

TMZ reported that Target removed her cookware line Cravings by Chrissy Teigen last month, but a source close to Teigen tells DailyMail.com that the partnership ended in December last year and had nothing to do with the controversy.

While Target’s website is no longer displaying Teigen’s range – which she launched with them exclusively in 2019 – they are still selling three of her cookbooks.

The source adds that Teigen and Target parted ways ‘amicably’ with the model preferring to sell her cookware range through her own website as well as other retailers.

Target confirmed the news to DailyMail.com in a statement on Thursday, saying: ‘We made the mutual decision in December to no longer carry the cookware line, given our continued focus on brands we develop and that can only be found at Target.’ —DailyMail

Short answer, it looks like the timing was coincidental. (Barring the possibility that anyone is saving face.)

She forced the hand of someone who never feels the need to say sorry to make a public retraction. It IS possible to beat them at their own game.

As for the product boycott?

One thing these people will care about, even if they are too arrogant to feel shame for bad actions, is to target their income streams the way they target ours. Pressure companies to not carry the product lines of a few of their more toxic people.

Make a public example of them.

Make them as radioactive as Harvey Weinstein.

It won’t take too many deep-sixed product lines before their side stops to think about whether the price they might pay for playing these ‘cancel culture’ games is actually worth the risk.

For those of our readers too young to remember the Cold War, look up the phrase ‘Mutually Assured Destruction’.

It kept Americans and Soviets from blowing the world halfway to hell. The same principle could work in other contexts, to make people stop and ask themselves — ‘is it worth it’?

(The other use for this is add her to the long list of leftists who can flaunt social media terms of service without having their account taken away… despite encouraging self-harm. When the class action lawsuit comes around, this can be one more data point in our favor.)

Candace is pretty fearless. America could use some more like her.

The surest way to make that happen, is looking at the example of inspiring people. Especially people who have beaten long odds, standing strong in dark times, and come out as champions, each in their own way.

Help Us Send A Shock Wave To The Establishment
June 17th, 2021 Sons of Liberty Media