Anyone familiar with Jordan Peterson knows that one of his foundational principles is a commitment to speaking what you believe to be true. The true things he says tend to get people talking… because others don’t have the guts to say them.

This became his core principle for a very specific reason — he studied the horrors that led to the rise of 20th Century authoritarian regimes like Germany and the USSR, and was convinced by Aleksandr Solzhenitsyn’s insight that the power for evil wielded by such regimes was built on the lies we tell ourselves, and others.

This has led him to become an outspoken critic of society’s sacred cows.

Jordan didn’t go picking fights. That isn’t his style. He reacted to something. Here’s what got the ball rolling.

It began with the suspension of a Canadian Professor over the sin of wrongthink… on her personal blog.

A Mount Allison University professor will not be teaching at the university for the fall term following an investigation into complaints that some posts on her personal blog were racist and discriminatory.

In a memo sent to faculty, staff and students on Tuesday, Mount Allison’s communications director said that Rima Azar, an associate professor of health psychology, will also be asked to take equity, diversity and inclusion training, at the university’s expense.

“Over the past two months, an independent investigator has reviewed complaints from students alleging discriminatory conduct, stemming from blog posts and student interactions,” Robert Hiscock said in the memo.

“The university has reviewed the report in which the investigator has made significant findings requiring action.” —CBC

What could possibly be so serious as to warrant corrective action on the university’s part? Was she celebrating Hitler? Dropping N-bombs? Uploading bootleg copies of Disney’s ‘Song Of The South’ or ‘Dumbo’?

Nope. She uttered political heresy that the pseudo-religious cultural overlords have deemed a punishable offense.

The Student’s Union president claimed he had received ‘multiple complaints’ about the professor’s personal blog.

The complaints were not about any one post specifically, he said, but rather about “what this professor was saying throughout her blog … denying systemic racism in New Brunswick or in Canada, talking about BIPOC students in unkind ways, labelling Black Lives Matter a radical group.”

During the controversy in February, Husoni Raymond, a St. Thomas University graduate who was mentioned in Azar’s blog, tweeted: “Disappointing to see a professor who’s still ignorant to what racism is and will be using her power within the institution to uphold racists ideologies. Racism IS in Canada. Racism IS in NB.”

Raymond was responding to a post by Azar in which she said, in part:

“Oh, one quick question to Mr. Husoni Raymond: Upon your graduation from St. Thomas University, you have been named the 2020 recipient of the Tom McCann Memorial Trophy for your ‘strong leadership and character’ … If NB is as racist as you are claiming, would one of its prestigious universities be honouring you like that?” —CBC

Here she is getting a professional award. The ‘science-y’ kind that the left holds in particular esteem these days. Women in STEM fields used to be such an important goal, right? 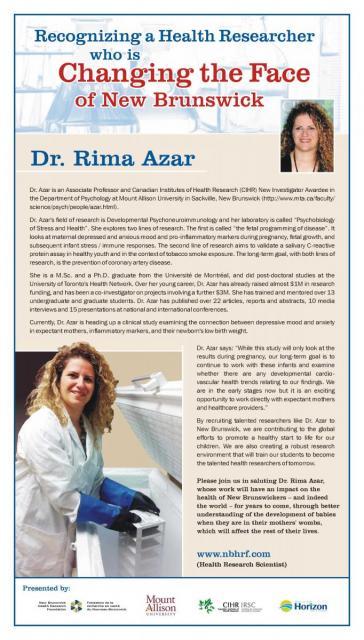 Yeah, well we’ve moved on. That was YESTERDAY’s issue. Today’s issue is racism. Didn’t you get the memo?

This is where Doctor Peterson enters the story. Unlike so many other gutless wonders in society who will gladly stand back and be glad that it’s someone ELSE being offered up as a sacrificial lamb to the gods of Cancel Culture, Jordan Peterson drew a line in the sand, and called the lie out for what it is.

Here’s the screenshot of the tweet, in case it gets nuked. 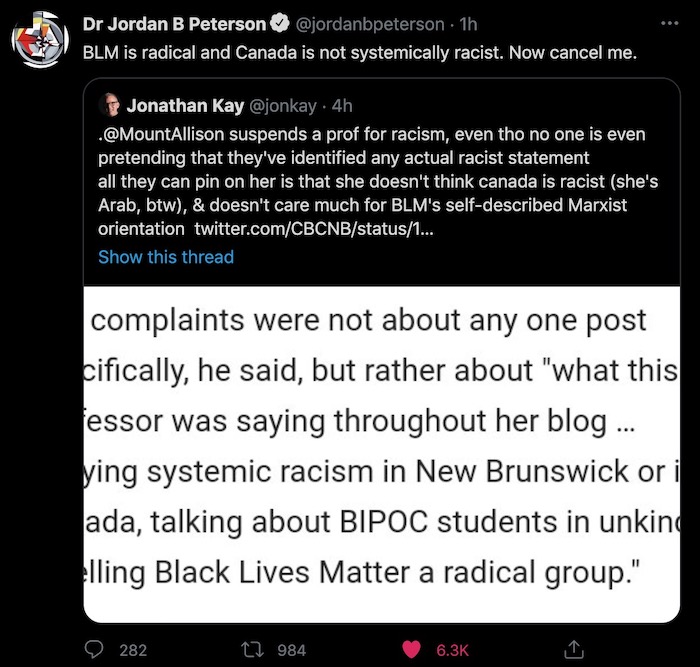 Link to the original is here.

The woman they are trying to cancel isn’t even white — not that it would matter if she were. (She’s Arab, if you’re wondering.) It just proves that this isn’t about black and white, it’s about power and subersion.

Peterson is standing up.

Who else is ready to join him?

How do we end this madness?

We start, by standing up together and declaring simple truths like the one he did… and daring others to do something about it.

If enough people join in, they lose the one real weapon they have over the public — the power of fear.

If you need a little inspiration of others who have stood up and made a difference in changing the world for the better? This little tornadic tome has ten of them.

More COVID Mind Control: “Delta Variant” Will Cause Biggest Fear-Mongering Of Entire Plandemic To Get You To Take The Depop-Shot
June 14th, 2021 Sons of Liberty Media