Remember the Biden rhetoric in his first foreign policy speech? ‘America is back. Diplomacy is back’…? How’s that been working out so far?

Wasn’t his diplomatic priority supposed to be buddying up with Iran and all those folks whose yearly celebration includes crowds in the streets coming together and yelling ‘death to America’?

Yeah, that sounds like a regime we’ve got SO MUCH common ground with. (Eye-roll)

Trump pulled the plug on the relationship with Iran for a reason. Part of that reason was the destabilizing effect Iran had on the rest of the region. In fact, stiff-arming Iran was part of what let Israel and its Arab neighbors to find common ground.

But Biden took the reigns and was excited to re-establish a relationship with Iran.

We’ve already seen some early failures in this attempt (links to various examples can be found further down). Let’s check in on how well that’s been working out lately. 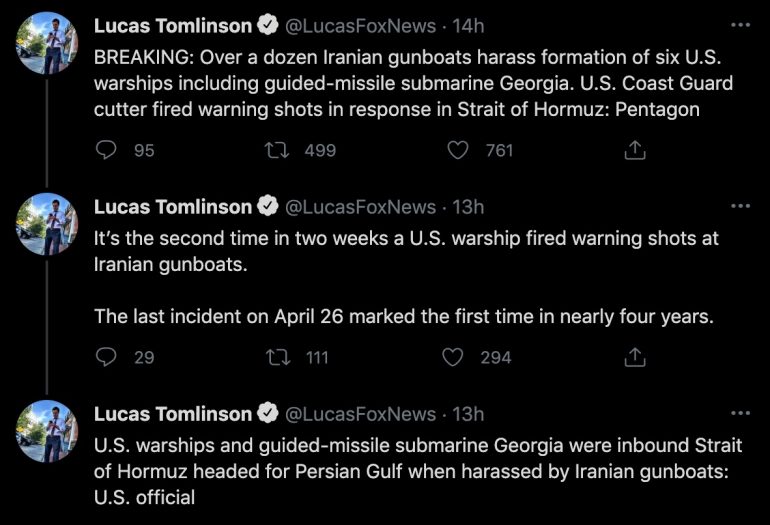 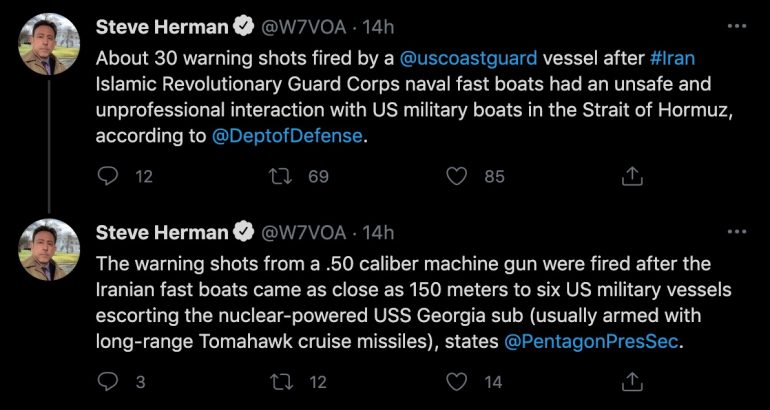 How does this latest fiasco compare to the standing orders that were in play a year ago? This was May of 2020:

The U.S. military has warned Iran that armed vessels approaching within 100 meters of U.S. Navy ships in the Persian Gulf region risk being “interpreted as a threat and subject to lawful defensive measures.”

The maritime broadcast warning issued on May 19 comes after U.S. President Donald Trump warned last month that the U.S. Navy would “shoot down and destroy any and all Iranian gunboats harassing our ships at sea.”

The U.S Navy broadcast issued to mariners said the warning was given “due to recent events, in order to enhance safety, minimize ambiguity, and reduce opportunities for miscalculation.” —AmericanMilitaryNews

Oh, ok. If Iran had pulled this stunt last May, they would be far too busy fishing Iranian sailors out of a debris field in the open water to bother American boats.

How far are we going to let this go, before we decide that sanctions need to be ratcheted up again, or that we need to mess with their country’s cybersecurity, or sink a couple of these POS Iranian ships that have been harrassing ours to prove that we’re not going to just bend over, grab our heels, and take it?

These petty tyrants respect strength, not ‘leading from behind’. They’re laughing at Joe. And honestly, if there weren’t so much at stake we would be doing the same thing.

Should any this really have surprised us? Of course not. We’ve been down this road enough times by now that we have no excuse to be surprised by it.

This pattern has roots all the way back to the Obama years.

Do you remember what Iran was doing the last time this clown was in the White House?

Major US Cities Race To “Re-Fund The Police” As Utter Lawlessness Reigns From Coast To Coast
June 21st, 2021 Sons of Liberty Media

DEAR COVIDictators: Will ‘You Believe The Science’ Of A Guy Who Outclasses YOUR Experts … Or Nah? (VIDEO)
June 21st, 2021 Clash Daily