Perhaps there needs to be a little extra vetting by news organizations when hiring people from areas of the world where antisemitism runs rampant.

Of course, with so many anti-Israel leftists around, that means pretty much everywhere.

Mosa’ab Elshamy is an AP staff photojournalist based in Morocco. Breitbart reported on Sunday that Elshamy has a history of antisemitic tweets, including using historical antisemitic tropes like “judensau” — comparing Jews to pigs; complaining about the “Jewish Lobby”; and blood libel — suggesting that Jews eat children. He also mocked Jews for playing the “Holocaust card.” It’s all rather disgusting.

Not disgusting enough to bar him for working for the Associated Press, however.

Unlike the suddenly former CNN contributor Adeel Raja, the tweets occurred before Elshamy was hired by the Associated Press.

How many of these antisemites are embedded in news organizations?!

The answer apparently is…far too many.

…while the New York Times still employs editor Tom Wright-Piersanti despite antisemitic tropes he published — that the publication publicly admitted were antisemitic — the organization did conduct a deep internal investigation and install various controls and checks and balances after the scandal rocked Times staff, following a Breitbart News investigation.

Here is a selection of Elshamy’s now-deleted tweets between 2010-2011.

Breitbart reports that Elshamy gained prominence as a photojournalist during the “Arab Spring” in 2011.

After the report by Breitbart, AP spokeswoman Lauren Easton responded with the following statement:

“AP condemns antisemitism and all forms of discrimination.We require all of our journalists to follow AP’s News Values and Principles and social media policy. See here: https://www.ap.org/about/news-values-and-principles/downloads/ap-news-values-and-principles.pdf And here: https://www.ap.org/assets/documents/social-media-guidelines_tcm28-9832.pdf AP was unaware of such tweets, which were sent prior to his joining AP, but as soon as we became aware we took steps to ensure they are deleted.The tweets do not reflect the views of the AP, which strives to cover the Israeli-Palestinian conflict fairly and factually.”

Let’s not forget that AP was irate that Israel had targeted the building in Gaza that their office was in were in during an airstrike — despite the Israeli government giving as much warning as possible to ensure civilian safety — but were less upset that they shared the building with Hamas. On Sunday, AP’s top editor, Sally Buzbee, called for an investigation into Israel’s airstrike on the building.

The question that follows is…does sharing a building with Hamas affect the organization’s ability to report what is happening in an unbiased manner?

Where do they get their numbers for the injured and the dead from? The Palestinian Authority? Hamas? If it is from their building neighbors, then by definition the Associated Press is spreading terrorist propaganda.

And it’s not like we didn’t know that the AP and Hamas were cozy. That was reported in 2014.

To be clear, I don’t at all think that the AP works with terrorists. I think they just make the calculation that part of the cost of doing business safely in an enclave ruled by terrorists is keeping your head down.

Here is Freidman himself weighing in on that. 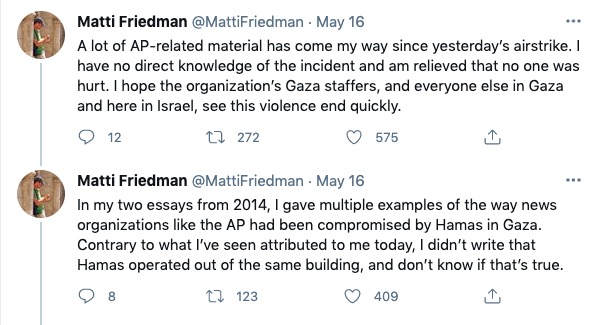 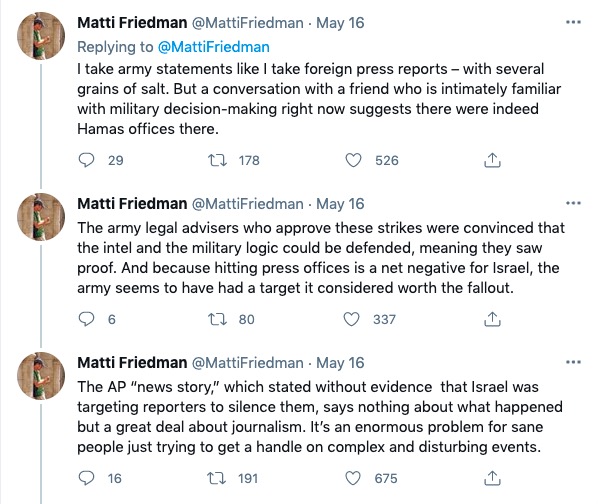 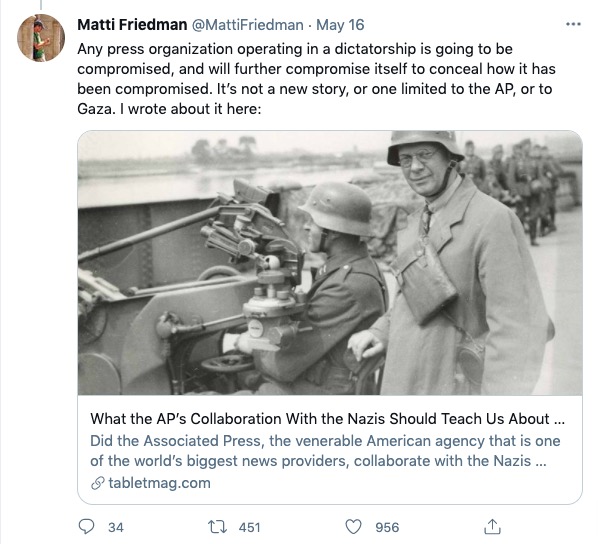 Don’t forget, everyone — these are your moral and intellectual superiors. They know more than you do. Our media betters report the news that they think you need to hear in the way that they think you need to hear it, no thinking for yourself is necessary. If you dare to say things that contradict them, you could face censorship by ad-hosting platforms, get “fact-checked” by college kids with a sickle to grind, or get booted off of social media for the crime of “wrongthink.”

These days, calling out antisemitism — especially of someone with thousands of Twitter followers — is a dangerous thing to do. Be careful out there.

Why Are Hordes Of Wealthy People Hitting The Escape Button & Heading To Montana?
June 14th, 2021 Sons of Liberty Media