This is being called the ‘strongest Second Amendment Bill in State History’.

You can add another state that is applying a maximalist understanding of a citizen’s right to bear arms.

Permitless carry legislation is now on its way to Governor Abbott’s desk.

Texas is poised to remove one of its last gun restrictions after lawmakers approved allowing people to carry handguns without a license, and the background check and training that go with it.

The Texas Senate approved the measure on Monday, May 24 (after the Texas House passed its version on Sunday), sending it to Gov. Greg Abbott, who has said he will sign it despite the objections of law enforcement groups who say it would endanger the public and police.

Supporters of the bill say it would allow Texans to better defend themselves in public while abolishing unnecessary impediments to the constitutional right to bear arms.

…The measure sent to Abbott would allow anyone age 21 or older to carry a handgun as long as they don’t have violent crime convictions or some other legal prohibition in their background. — DFW CBS

The more we see this on the individual state level, the harder it will be for Biden’s crew to stomp on the rights of lawful owners. 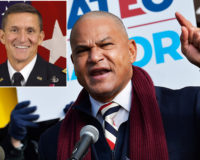