What does it say about your ability to represent the Republican party when your strongest allies are found among those aligned with the hard political left?

Lately, Liz Cheney has been sounding more like a CNN contributing voice, or a junior member of the Schiff/Nadler/Pelosi/Schumer slander squad than an elected Republican. She’s out of step with those of us whose first concern is putting a stop to the radical left from taking a wrecking ball to American institutions.

We’re not going to rehash why her allegations about Trump and insurrection are WAY off-base. We covered that enough during the impeachment nonsense. What’s more interesting is how little she had to say about the flamethrower that Biden has been taking to political norms and institutions, to say nothing about how MIA she has been in response to the systemic slander of Republicans who stood up for making it ‘easy to vote and hard to cheat’ as bigots.

Liz has been stripped of her leadership role.

Meeting behind closed doors for less than 20 minutes, GOP lawmakers used a voice vote to remove Cheney, R-Wyo., from the party’s No. 3 House position, a jarring turnabout to what’s been her fast-rising career within the party. — AP

We would cite their story further, but the supposedly ‘impartial news source’ had more editorialization and snide comments about Trump than actual news in it.

Let’s see what a less partisan source has to say about the events.

House Republicans have voted to oust Rep. Liz Cheney from her leadership position on Wednesday, a rare move that highlights the leadership former President Donald Trump still holds in the party.

Cheney — daughter of former Vice President Dick Cheney and one of Trump’s most vocal critics — served as the House Republican Conference chairwoman, a position that entails leading the chamber’s messaging efforts.

While she overwhelmingly prevailed in a vote in February, shortly after her announcement that she would vote in favor of impeaching Trump for “inciting” the Jan. 6 Capitol riot, the political climate shifted, with a growing number of lawmakers including House Minority Leader Kevin McCarthy (R-Calif.) and Minority Whip Steve Scalise (R-La.) backing the efforts to remove her from their team. — NYPost

Even those ‘moderates’ who share her views about the recount efforts have been put off by her dogged trashing of Trump, long after he’s left political center stage.

“And I think this is exactly the argument Nancy Pelosi wants us to have – it just plays into her hands. I’d rather… I think if we focus on Biden, what Pelosi has going on with the votes we are taking, what we are going to do if we win — so this is not what we need to be talking about.” — NYPost

Here she is fist-bumping Biden. 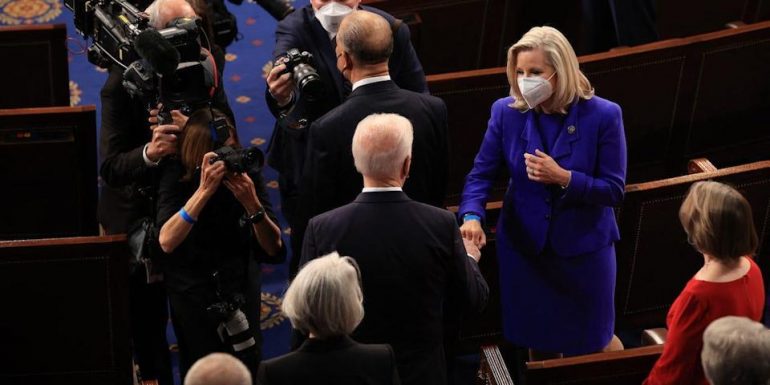 Cheney will undoubtedly pretend to be a political martyr. And she’s certainly getting the drooling approval of the left for sowing division on the right.

But it’s not clear how many in her party share that exalted view of her moral standing.

Elise Stefanik is thought to be her most likely replacement. Here’s the letter she offered making the case for her role in leadership.

A letter to my colleagues on my vision to unify our GOP Conference, win the Majority, and fight on behalf of the American people to save our country👇🇺🇸 pic.twitter.com/JGE5IqhNJo

Ironically enough, Trump gets the last word in this story.

He posted a message this morning. 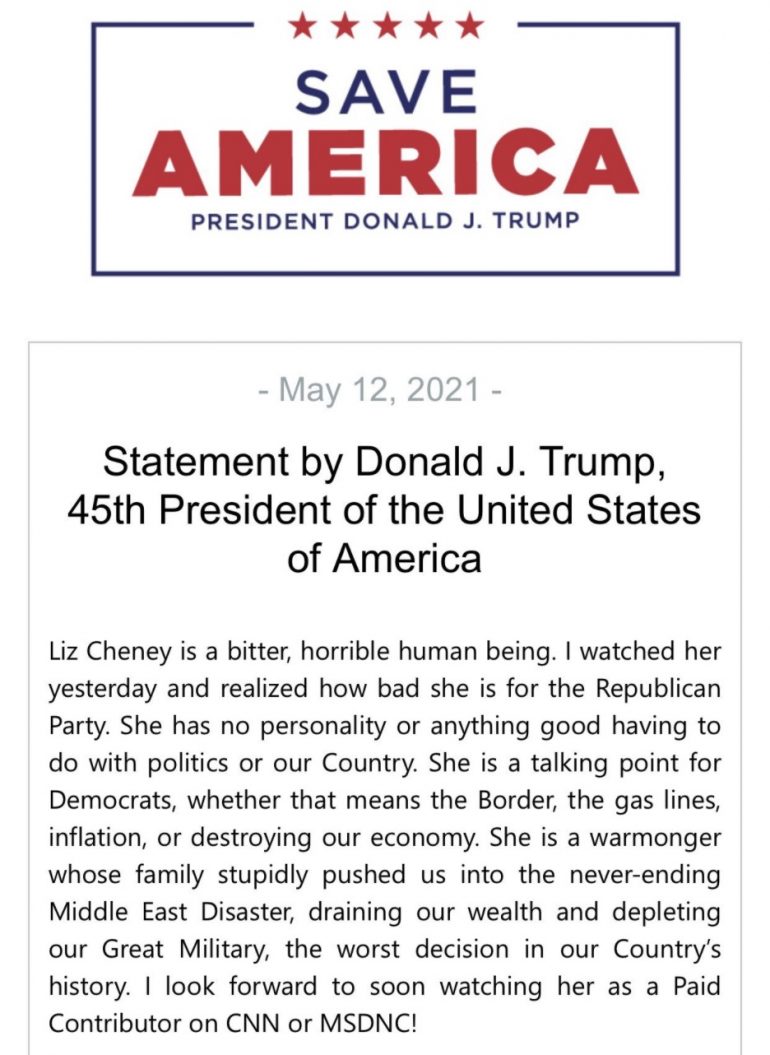