The leftist media were thrilled to have another kick at that Russian collusion can, by throwing rocks at Manafort’s connections to Kilimnik… yawn at China’s anti-Trump oppo research.

Lets’ compare their reactions to them both.

First, as a baseline, let’s look at the recent rebirth of the tired old Russian Collusion narrative.

Since Manafort was Trump’s campaign manager until a (now-discredited) ‘black ledger’ forced him to withdraw, Manafort is a favorite go-to for anti-Trump media to indirectly smear Trump as working with Russia in 2016.

Over the last month we saw all sorts of stories about how he had worked with the Russians to get Trump elected by giving proprietary polling data to someone with connections to a Russian oligarch, named Kilimnik. Here is one of the less salacious instances of that reporting:

It also follows the Treasury Department announcing sanctions against Konstantin Kilimnik, an associate of 2016 Trump campaign chairman Paul Manafort, assessing he is a Russian intelligence services agent who provided Kremlin spies with “sensitive information on polling and campaign strategy” during the 2016 presidential race. — WashintonExaminer

And yet our own government didn’t even consider Kilimnik a shadowy figure until AFTER they decided he could be weaponized to defame Trump.

In a key finding of the Mueller report, Ukrainian businessman Konstantin Kilimnik, who worked for Trump campaign chairman Paul Manafort, is tied to Russian intelligence.

But hundreds of pages of government documents — which special counsel Robert Mueller possessed since 2018 — describe Kilimnik as a “sensitive” intelligence source for the U.S. State Department who informed on Ukrainian and Russian matters.

Why Mueller’s team omitted that part of the Kilimnik narrative from its report and related court filings is not known. But the revelation of it comes as the accuracy of Mueller’s Russia conclusions face increased scrutiny. —TheHill

Now let’s look at the Biden analog to that story.

One of the juicy finds in that abandoned laptop the media have been working hard to suppress was the series of emails between Hunter and the flirty 29-year-old working for someone Hunter himself described as China’s spy chief. 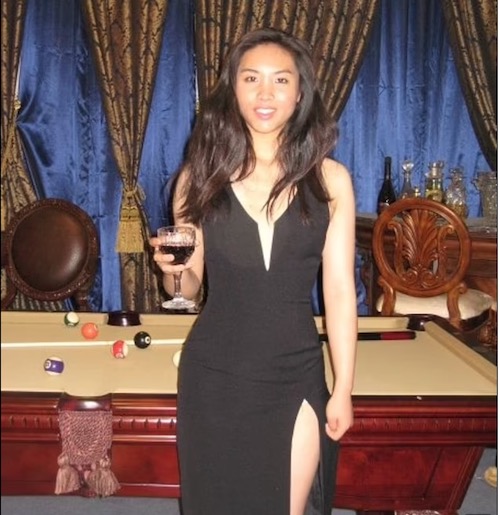 Here is the text talking about the dog tags which were, for some reason, in her safekeeping. 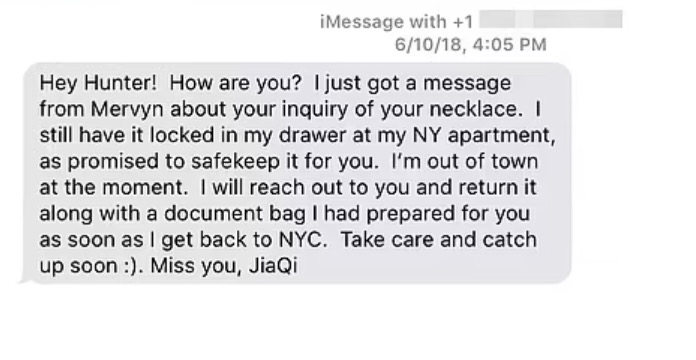 ‘Miss you’ is awfully friendly for a purely professional relationship, one might think. For context, here is what Biden said about the guy for whom this woman served as secretary.

I have another New York Times reporter calling about my representation of Patrick Ho – the fucking spy chief of China who started the company that my partner, who is worth $323 billion, founded and is now missing. The richest man in the world is missing who was my partner. He was missing since I last saw him in his $58 million apartment inside a $4 billion deal to build the fucking largest fucking LNG port in the world. And I am receiving calls from the Southern District of New York from the U.S. Attorney himself. — read more here

An actual honest-to-goodness Chinese spy fed Hunter Biden some anti-Trump oppo research to help Joe get elected. Whether he used it or not shouldn’t make a difference, he took it, which opens him up to leverage (as if there were’t already several ways they could use leverage against him). And Hunter seems to have taken money in explicitly shady circumstances, too. 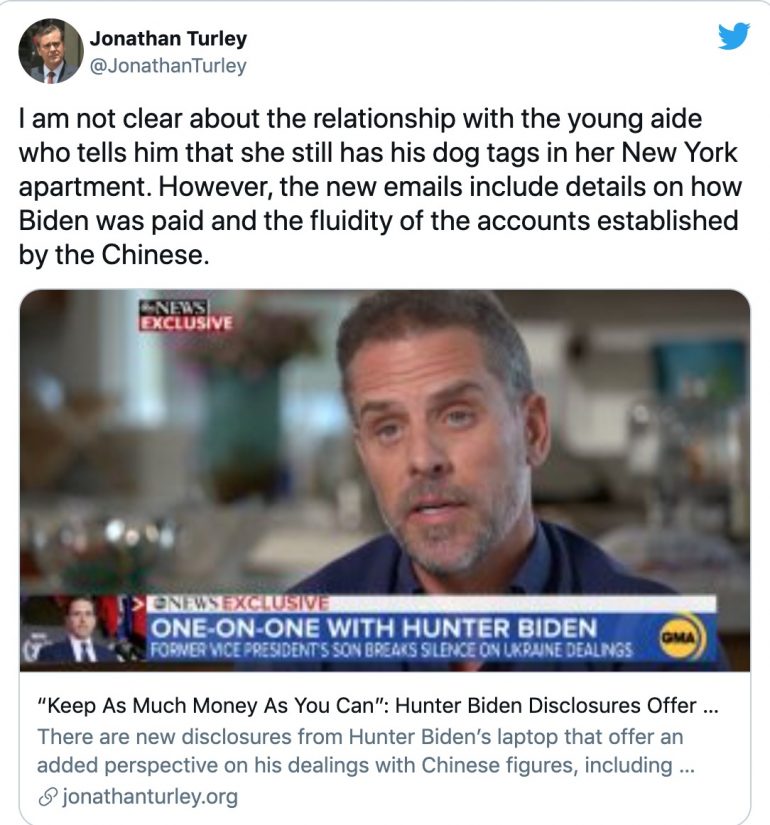 The mysterious young assistant wrote the president’s son flirty messages, sent him opposition research for Joe’s White House run and encouraged him to draw funds from the company’s accounts when the joint venture collapsed and even ended up with Hunter’s military dog tags.

Hunter described Ho in a call recording on his abandoned laptop as the ‘spy chief of China’, and the Chinese businessman was later surveilled by US law enforcement as a foreign intelligence threat before he was convicted of bribery in 2018. — DailyMail [emphasis added]

We have what looks like dirty money in play between a CCP spy chief and a now-sitting President’s son, and oppo research that was intended to help get Hunter’s dad into the White House. We know that Hunter has NOT cut his financial ties with China yet, and there have been credible allegations of pay-for-play since long before this past election cycle.

See how she is telling Hunter to game the system and take as much money has he can for himself out of the company?

Where is the media outrage now?

We had breathless reporting about ’emoluments’ or ‘hush money’ or ‘security threats’ or ‘backroom deals’ at every turn during the Trump presidency, even when the allegations had no merit, they STILL chased after stories like the ‘Trump Tower Meeting’ with Don Jr. (a nothingburger) or bank dealings in Europe, or whatever.

If THOSE were news stories worth chasing down, where does that leave stories about the secretary of a Chinese spy chief giving money and information to the morally corrupted son of a former Vice-President… who now sits in the White House?

If ever there were a time for a news media to put professionalism and patriotism before political activism, now would be that time.

But they’re acting more like guard dogs for the government than watch dogs threatening to expose their deepest darkest secrets.

Where are the real men and women of courage when we need them to step up?