We’ve all heard of ‘tourist traps’, but this is ridiculous.

Picture yourself crossing a scenic glass-bottomed bridge, enjoying the sights when a gust of wind blows out the panels of glass you’re supposed to be standing on. You’re stuck. Now what?

That’s what happened to one poor tourist in China.

One of the problems with bridges — especially ambitious ones — is what wind can do to them.

For example, this bridge in China held firm despite being whiplashed by high winds.

😮 This bridge in Guizhou #China, was tossed like a rag doll by heavy winds. It miraculously stayed connected at both entry points 😱 #Engineering pic.twitter.com/xj2oRkDL95

That bridge may have held fast at both ends, but it was a little too soon to brag about their engineering. Here’s another bridge story from China that did NOT end quite so well. 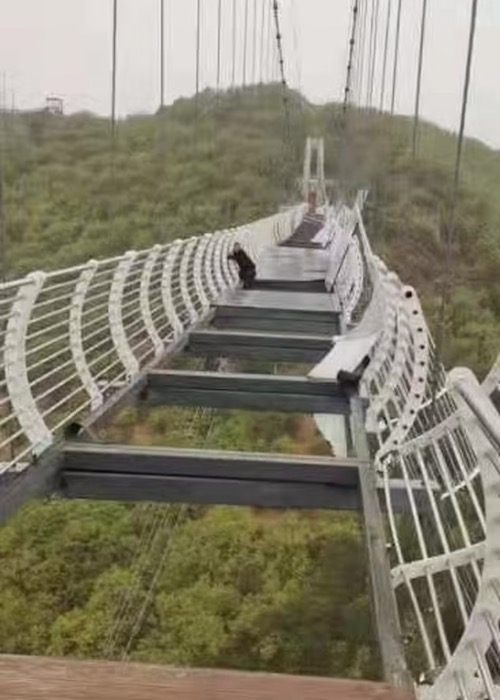 A man was stranded on a glass-bottomed bridge in northeastern China on Friday, after record-breaking winds shattered the brittle panels and forced the tourist attraction to close.

The visitor was said to have been walking atop the 400-meter-long (437-yard-long) Piyanshan Glass Footbridge in Longjing, Jilin province, when gale-force winds suddenly struck at about 12:45 p.m. on Friday. Glass panels underneath his feet cracked and crashed down the cliffs some 260 meters below.Photos showed the man clutching onto the guardrails, with several holes in front of him in between beams that ran 2.5 meters horizontally across the bridge.

Staffers and firefighters arrived at the scene, and under their guidance, the man was eventually able to crawl back to safety, mainland Chinese media reported. He was then sent to hospital and received counseling. — Appledaily