File this one under ‘don’t try this at home, kids’. This guys’ lucky he lived to tell the tale.

Kentucky Ballistics is a youtube channel run by Scott DeShields Jr with close to 2 million subscribers.

To give you an idea of what they’re like, here are some of their show titles and topics.

They have a series called ‘caliber face off’ that pits one gun against another, for example, the Desert Eagle 50 AE vs. 500 SW Magnum, or the 10mm vs. 44 Magnum.

They do ballistic gel tests.

They do full auto Friday, which includes one episode where they take an AK-47 up against a 90 lb slam ball.

Some of the most interesting titles involve the 50 BMG against different targets. These include a 380 lb Atlas Stone, a Stretch Armstrong toy, an anvil, a kettlebell, a boat anchor, adjustable dumbbells — you get the idea.

Until one day, that destructive force came a little too close to home for the host, as this photo will show. 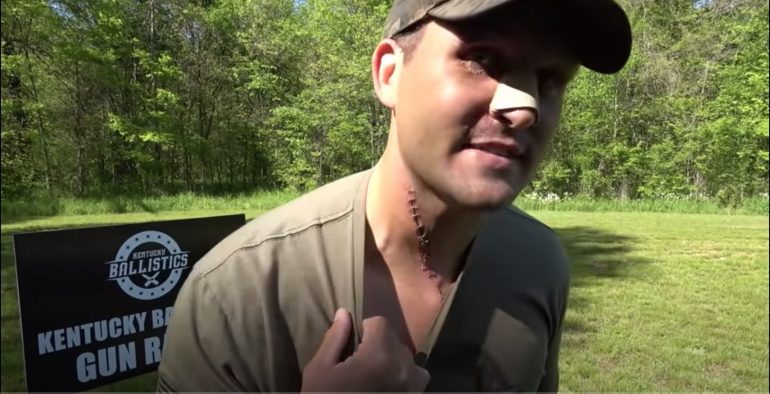 In the video he walks us through exactly what happened, including showing the holes he had been punching into a fire hydrant in his earlier shots (he had been using SLAP rounds). The second-to-last round he fired stopped just short of a through-and-through and was shown just poking out of the far side of the hydrant.

The next shot was, in Scott’s words, ‘extremely hot’. This wasn’t a question of having broken any gun safety rules. In fact, his safety goggles are the only thing that saved his eye (possibly his life) from the cap that got blown off with so much force that the threads were shorn off. When that cap came off, so did two metal pieces that keep the weapon from closing with the cap not screwed tight.

One barely missed his head, punching a hole in his hat and taking it off. The other one did the real damage. His jugular was torn up (he wound up needing 5 units of blood), his lung was collapsed, and he was ‘hooked up to every machine possible.’

The story about his firearm going kaboom? That was impressive.

But the story about his recovery, what they did in the hospital, his stupid-fast turnaround time (he was sent home 8 days later) and what he credits this remarkable recovery to? That’s even more compelling to watch.

The fact that he came back and made this video only 2 weeks later shows that the man really is pretty fricken badass. And even after all this, Scott is NOT planning to throw in the towel on Kentucky Ballistics.

The video is only about 20 minutes long. But it’s so worth it.

What Is The “Black Fungus” Sweeping Across India?
June 22nd, 2021 Sons of Liberty Media