There is a reason that all election results evidence must be preserved for a set period of time… so they can be audited for purposes of transparency.

Transparency is critical to establishing trust. Since we haven’t followed up in a while with what’s happening in that very polarizing audit in Arizona, let’s see how things are going.

It’s been something of a gong show. There’s been an ongoing tug-of-war over turf and authority between the Senate, who have been pushing for this forensic audit, and local officials, media, and Democrats who loudly oppose it, and have been looking for ways to stonewall it at every opportunity, replied to by threats of heavy subpoena use.

That level of resistance seems odd from a party so very convinced that Biden won the election handily with record-breaking numbers. Wouldn’t someone who believed that want to take a victory lap and prove to the naysayers just how solid that win was?

We all absolutely KNOW that Trump would have been beating his chest and daring the auditors to recount the numbers if it had been reported that Trump won with the most votes in history. What makes Democrats so hesitant? Could it be because it’s a third-party team with no insider governmental connections is the one doing the counting?

A variety of points of conflict have come up as the drama unfolded. Political insiders connected to the election officials whose work is being audited tried to pose as reporters to gain entry to the audit facilities. The use of the building itself was opposed. Irregularities in the chain of custody have been alleged by both sides.

Here’s an example of concerns raised by the auditors. (The counter-claims are mainly directed at claim of their competence, professionalism, procedures, or alleged partisanship.)

Read the letter to the Maricopa Board of Supervisors here: https://t.co/QAXtFdQ8lf

More recently, there has been the refusal to comply with subpoenas, with two specific incidents showing just how deep the animosity is going.

First, Maricopa Country refused to provide the administration passwords to verify the activities of the technology as it was used during the election. (Dominion Voting Machines has offered their own explanations for refusing to comply with subpoenas to provide that administrative access to their machines.)

We were told that Maricopa County did not actually HAVE any administrative passwords and that all passwords in their possession had been presented to the audit team.

Ironically, the audit team is providing their own router information and passwords to prove that they are not doing anything beyond of the scope of their lawful authority, as Reuters has reported: 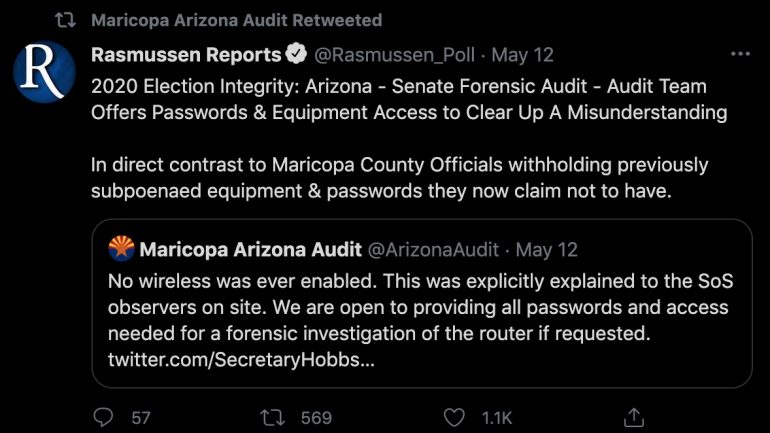 Even Reuters cannot help but notice the difference in each group’s approach to transparency.

That’s not even the half of it. They tore a page from Hillary Clinton’s playbook.

Remember her line, ‘like with a cloth?’ On the other hand, we have no reason to believe bleach bit was used in this instance.

Shortly before they were due to be audited — and AFTER they had been subpoenaed — some key files appear to had been deleted.

Breaking Update: Maricopa County deleted a directory full of election databases from the 2020 election cycle days before the election equipment was delivered to the audit. This is spoliation of evidence! pic.twitter.com/mY0fmmFXAm

“We have recently discovered that the entire ‘Database’ directory from the D drive of the machine ‘EMSPrimary’ has been deleted,” Fann wrote, claiming the missing directory is covered by the Senate’s subpoena, which allows the group to seize elections materials for the audit.

“This suggests that the main database for all election related data for the November 2020 General Election has been removed,” she added. “Can you please advise as to why these folders were deleted, and whether there are any backups that may contain the deleted folders?” — WashingtonExaminer

There are big claims being made by partisans on both sides about just how this will play out… but really, we won’t know until everything wraps up.

Concerned citizens of good intent across the political spectrum should be able to agree on one thing — whatever we learn about what happened in 2020, any loopholes in our system that can be exploited by malevolent agents with private agendas should be identified and made more secure. And we should do so by whatever means is most expedient.

‘Easy to vote and hard to cheat’ is a slogan chanted by many calling for electoral reform. That seems like a good starting point for us to come together.

Aside from those political operatives who actually welcome cheating, thinking it can give their party an advantage. (You know who you are.)