Trump mocked his critics with his famous ‘very stable genius’ tweet when he scored so well on his cognitive function test. Now it’s Joe’s turn.

Late last year, Nancy Pelosi and company were angling for new ways to trigger the 25th Amendment, and it wasn’t entirely clear whether that was intended as a tool to be used against Trump if he won another term or if it was intended to keep their sock puppet, Biden under their thumb.

When so-called professionals with a background in psychology broke with explicit rules of medical ethics by violating the Goldwater Rule by offering a medical opinion on a politician they had never seen as a patient, Trump flipped a potential loss into a win by achieving a perfect score on a formal cognitive test.

What made that win even more delicious was when media types tried to make fun of the perfect score by taking it themselves, only to come away with lower scores themselves.

Joe Biden never misses a chance to take arrogant swipes against Trump and his supporters, or their character, regularly calling Trump ‘unfit’ for a wide variety of things. He is endlessly weaponizing retread lies against him that even the media have long since been made to retract.

Now Trump’s own doctor is dropping the gauntlet on Biden… using that precedent to demand that Joe submit himself to the same test. He had more than a dozen co-signers to an open letter he wrote to Biden.

While we are including images of the full letter, one paragraph sums up the main idea very well.

“The American people deserve to have absolute confidence in their President. They deserve to know that he or she can perform the duties demanded of the office, and they deserve to have full transparency on the mental state of their highest elected leader. I would argue that the American people don’t have that confidence in President Biden. When I was Physician to President Donald J. Trump, the liberal media relentlessly pushed a narrative that he needed a cognitive test and that it should be the standard for anyone serving as Commander-in-Chief and Head of State. I administered the Montreal Cognitive Assessment (MOCA) test and President Trump excelled. Given the precedent set and Biden’s clear mental impairment, I believe it is past time he undergo a cognitive test.”

Given the precedent set and President Biden’s CLEAR mental struggles, I believe it’s past time he take a cognitive test.

I sent a letter to him saying just that! ⬇️https://t.co/6RCKj7pFYd 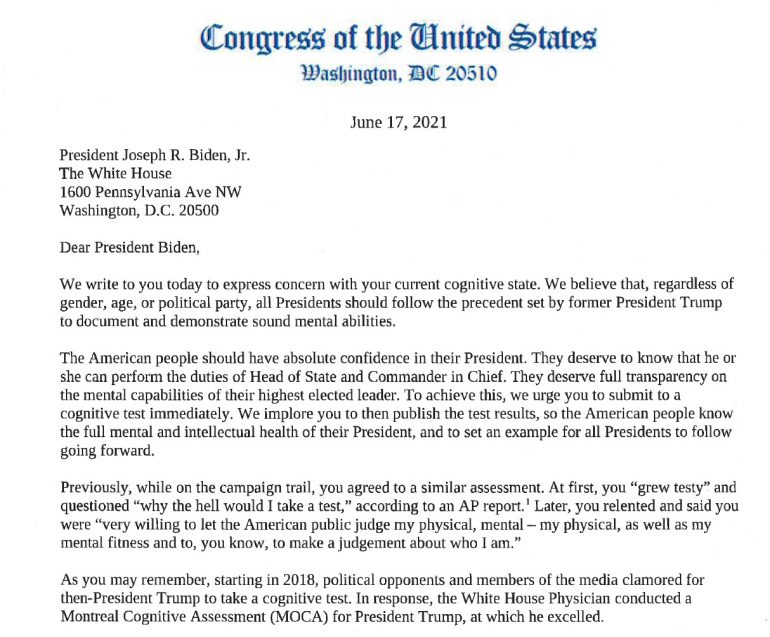 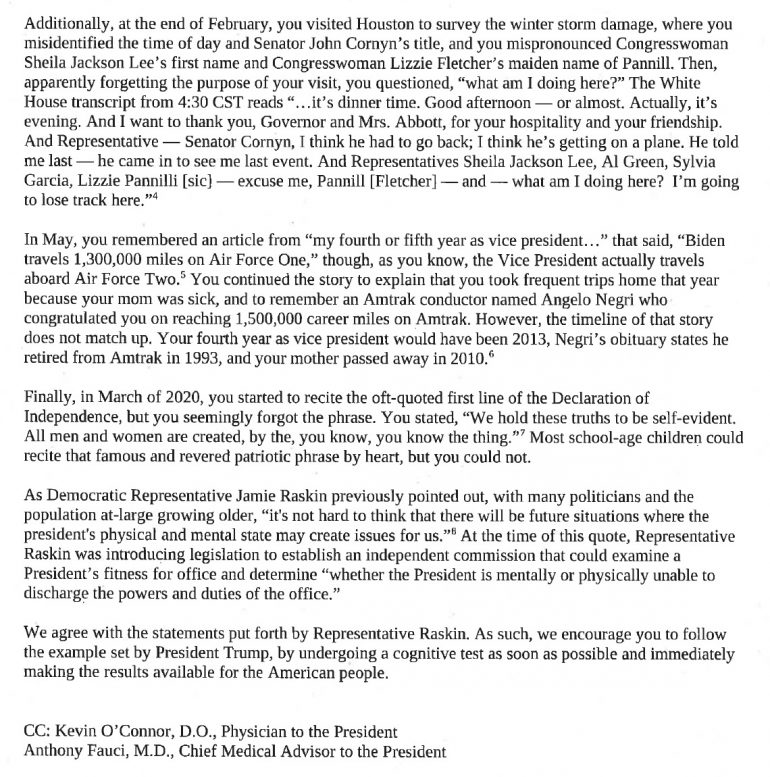 The tough guy wanted to challenge American voters to push-up contests to show the world how fit he was for office. The public has little concern about the frailness of his body. The current state of his mind, on the other hand, remains an open question.

If it turns out that he scores as well as Trump did on his test, that will come as good news.

And if it turns out he really is declining, it will be important to know just how far the decline has progressed. America need look no farther than Woodrow Wilson to know how power can be abused unconstitutinally by unelected individuals when an administration is not on the level about the mental faculties of the sitting president.