Year over year, arrests of criminal migrants in Laredo Texas have gone from 60 to 760 in the same time period. And that’s just in the first part of this fiscal year.

Some of us are old enough to remember when Trump was pilloried for saying that many of the people coming across the border illegally were NOT just ordinary people looking for a better life on this side of the border.

Biden — and especially Kamala, who has gone AWOL since being assigned with the task of fixing Biden’s Broken Border — have been turning a blind eye to the criminal element that is making money hand over fist and enslaving many of the unfortunate souls thinking they can do business with the cartels without getting in over their heads.

It comes as a surprise to nobody but the libs that this open border is welcomed by the worst sort of ne’er do wells who would gladly waltz into America. Some of them had previously been deported for a variety of heinous and violent acts, sexual and otherwise.

Since the start of the fiscal year, a total of 760 criminal migrants have been brought into custody, compared to 60 who were arrested over the same time period last year.

“These arrests continue to highlight the dangers that illegal immigration poses to our country,” the Border Patrol said in a statement. “Dangerous criminals such as these endanger our communities by showing a lack of regard for our country’s laws. The agents of the Laredo Sector are committed to their duties of protecting the American people, safeguarding our borders, and enhancing the Nation’s economic prosperity.”–WashingtonExaminer

Who has been picked up?

Border authorities in Del Rio, Texas, on May 26 announced their sector had experienced a 3,166% increase in the apprehension of convicted sex offenders, compared to numbers from the same time frame last year. A total of 95 border crossers previously found guilty of sexual crimes have been apprehended in the area so far.

…Two Honduran nationals were arrested in the one-week period as well. The pair had a litany of convictions, including statutory rape and second-degree sexual assault of a child.–WashingtonExaminer

We look forward to AOC using her considerable media presence to bring awareness to this threat that child rapists freely crossing into our border introduces to all Americans, especially the most vulnerable among us. 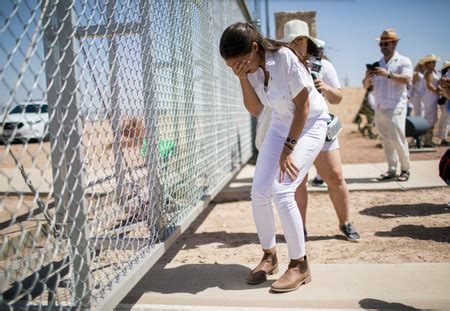 Surely her compassion just wasn’t all about manufactured outrage for political gain, was it?

Let’s just say we won’t be holding our breath waiting for her to ‘champion’ the cause of anyone suffering from the current border crisis. As for Joe and Kamala? They’re even less likely to start caring any time soon. They see this is as a long-term win for their party.

Change the demographics, change the vote.