Where will all those teachers who refused to go back to school until all the children they teach had their COVID shot weigh in on THIS issue?

In the headlong rush to make even the people with the fewest risk factors line up for this shot, children have been green-lighted to receive this vaccine.

Has everyone forgotten this vaccine has provisional approval and is still, strictly speaking, ‘experimental’?

Have we forgotten how the media lost its mind over one Lancet study (now discredited and retracted) claiming that HCQ — a drug with a decades-long track record of safety — could cause heart troubles led to HCQ being demonized and blocked plausible cheap and effective COVID treatment alternatives from being tested?

With hundreds of teenage boys showing signs of heart inflammation, the CDC is now scrambling to figure out what we should do next.

Centers for Disease Control bosses have called an emergency meeting over higher than expected cases of heart inflammation among young people who’ve had Pfizer and Moderna’s COVID-19 vaccines.

They will gather on June 18 to discuss 226 plausible cases of heart inflammation in young people – mainly affecting teenage boys and young men – after they have received their second doses of the vaccines. – DailyMail

After huh? Just how ‘after’ are we talking about here? *scans article* Hmm, it says ‘overwhelming majority of cases occurred within a week of vaccination’. Is that important?

A total of 226 cases have been reported that may meet the CDC’s ‘working case definition’ of myocarditis and pericarditis following the shots, the agency said.

Is it a small percentage of the whole? Sure. But that’s true of most medical interactions. You could make the same ‘small percentage’ statement to describe the number of people (especially young people) becoming seriously ill from exposure to COVID.

What we would like to know is just how serious — and long-lasting — a risk the nation’s children are being asked to take on in shouldering their so-called ‘responsibility to stop the spread’ of a disease that’s largely under control already to begin with.

Symptoms include: chest pain and breathing difficulties. Nope, that kind of symptom doesn’t sound normal for a teenage boy, does it? Good thing we don’t have a problem with heart disease in America, do we? 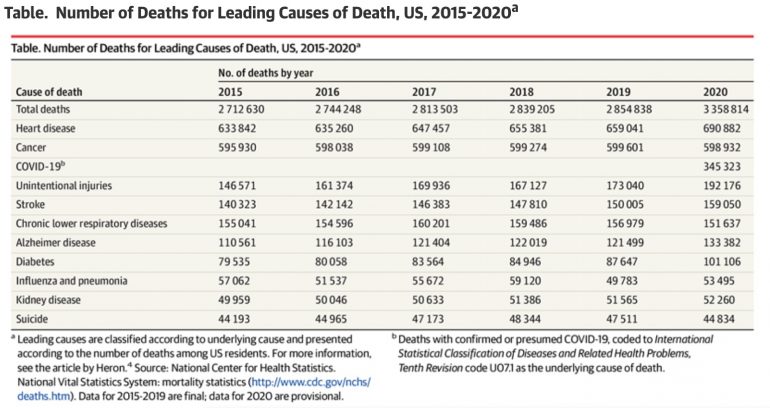 Oh wait – heart disease is the #1 killer? To hear the TV experts these days, you’d think the only risk we face anymore is that virus the CCP employees in Wuhan unleashed on the world.

So what’s the risk-reward of a teen deliberately injecting himself with something that has a chance of giving him a heart condition whose long-term effects are still an unknown, versus taking his chances of contracting a virus that has a statistically near-zero chance of hospitalizing him, let alone killing him?

Be sure to factor the math for all the high-risk people his vax is supposed to protect having access to vaccines of their own into your calculations.

The CDC’s vaccine advisory committee will be meeting on June 18 to further evaluate the possible risk.

How nice. And what happens in the meantime? A quick look at their website doesn’t say much about about myocarditis, but it does say this: 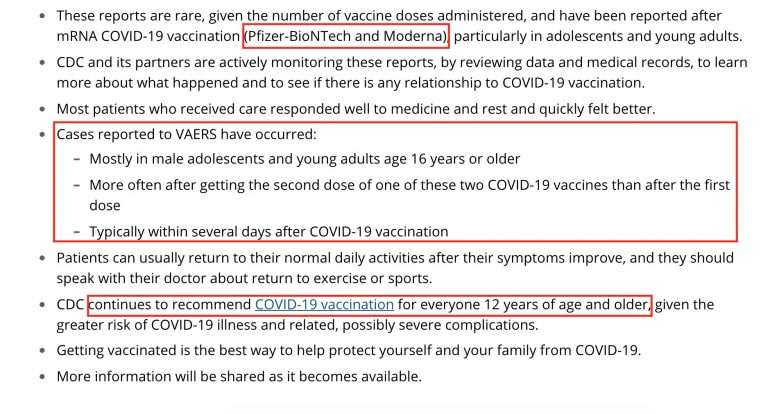 They continue to recommend giving this vaccine to minors? Interesting. That raises an interesting question: based on precisely what safety record or long-term testing do they base this medical advice?

And who exactly bears the consequences if they are wrong?