The next time some Democrat whines about the Republicans wanting to “suppress the vote” call them a hypocrite and show them this.

According to an Axios report, tax records show that Majority Forward gave $2.7 million in 2018 to another nonprofit called the Coalition for a Safe and Secure America (CSSA) — the majority of the $4 million that they raised in 2018. 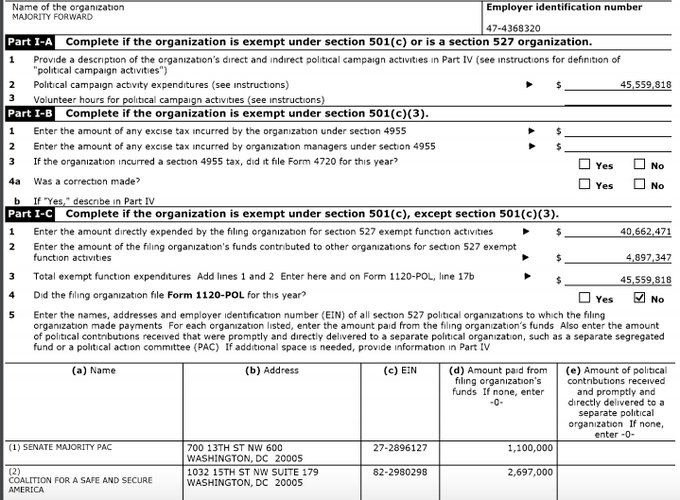 CSSA used that money to fund deceptive direct mail and digital advertising campaigns attacking Republican candidates in some of the nation’s most competitive Senate contests in order to suppress the GOP turnout in the 2018 general election.

CSSA targeted Republicans just weeks before the election in state-specific Facebook ads attacking them from the right by questioning their conservative bona fides and promoting Libertarian candidates in order to split the vote.

Among those targeted were Josh Hawley and Mike Braun, who were elected, and then-Sen. Dean Heller and now-Rep. Matt Rosendale who both lost their 2018 races.

Ads aimed at Hawley in Missouri claimed that he “sides with Washington liberals against gun owners.”

The group dubbed the Indiana Congressman “Tax-hike-Mike-Braun” in ads.

In Nevada, ads claimed that Heller “allowed almost 200,000 foreign workers a backdoor entry into our country.”

In ads targeting Matt Rosendale, who was a Senate candidate in Montana in 2018 claiming that he “supports drone monitoring.”

An IRS complaint has been filed against CCSA by the group Citizens for Responsibility and Ethics in Washington (CREW) to investigate whether CCSA had violated section 501(c)(4) of the tax code for “failing to properly disclose hundreds of thousands of dollars, and possibly much more…on political activity in 2018.”

A recent FEC statement says that CCSA “failed to include required disclaimers on mailers containing express advocacy and failed to report the cost of those mailers to the Commission.”

It’ll be interesting to see if AOC denounces this after her loud condemnation of “dark money” in politics.