In 2018, Hunter Biden spent a few days at a swanky hotel with a Russian prostitute and had trouble paying her. Joe might have accidentally paid the bill.

Miranda Devine of the New York Post had a bombshell of a report on Tuesday with more damning material from Hunter Biden’s Laptop From Hell.

In late May 2018, Hunter was staying at Hollywood’s famous Chateau Marmont hotel, when he ordered a Russian prostitute from his favorite escort service, Emerald Fantasy Girls. He selects “Yanna”, a 24-year old Russian native whose description on the site is “Russian, Green Eyes, Thin Brunette, an elite courtesan.” Along with her brief bio is a list of sex acts.

Robert Hunter Biden, contacts her using his given name, “Hi, My name is Rob. I’m staying at Chateau Marmont. Are you available now?”

But things go wrong when it’s time for Yanna to leave. She wants to get paid the $8,000 he owes her and Hunter’s debit cards aren’t working.

On May 24, while hungover, Hunter decides to try a new tactic. He adds a new recipient on Zelle, a cash transfer app. The woman he adds is Yanna’s employer, a woman named Gulnora, who is the registered agent for Emerald Fantasy Girls.

He transfers $8,000. It doesn’t work. A few minutes later, Wells Fargo sends him a fraud detection alert. He reaches into his wallet and pulls out a card. Yanna attempts to transfer the $8,000 but it apparently doesn’t go through. He rifles through his wallet again. No luck. He pulls out another card. Bingo.

Soon enough, his cellphone starts pinging. It’s Yanna: “There is many transactions on my account,” she texts. “From last night 8k, 8k, 3500k. So get back with me when you can. So I can transfer back to you. Better if you call my personal.”

She follows up: “I’m happy to see that much in my account.” Her last text: “No worries you can have the rest back. Karma is a bitch.”

According to text messages on the laptop, all but $5,000 of the overpayment was returned.

But that’s not the end of the story.

Shortly after the debit card debacle with Yanna, Hunter appears to have received text messages from Robert Savage III, a Secret Service Agent in L.A. The exchange includes texts that refer to an account linked to “Celtic”, which was the code name for Joe Biden when he was Vice President.

What we do know from the laptop is that a few hours after Hunter’s debit-card woes began, text messages start arriving that are labeled as being from Robert Savage III. Savage was once the Secret Service’s special agent in charge of the Los Angeles field office and a contact card for him appears on the laptop, with a photographic avatar, phone number and Secret Service email address.

The Secret Service told The Post that Savage retired from the agency on April 30, 2018 — weeks before the Biden debauchery — and that the agency “did not provide protection to any member of the Biden family in 2018.”

Savage’s lawyer says, “My client has never met or communicated with Hunter Biden and has never been to the Chateau Marmont and had not even heard of the hotel. In fact, my client was retired before the date of these fabricated text messages.”

After several minutes of back and forth, Savage and Dale Pupillo, retired Deputy Assistant Director of the Secret Service, who used to guard Joe Biden and conducted background checks for Hunter on potential business partners, arrive outside his door. 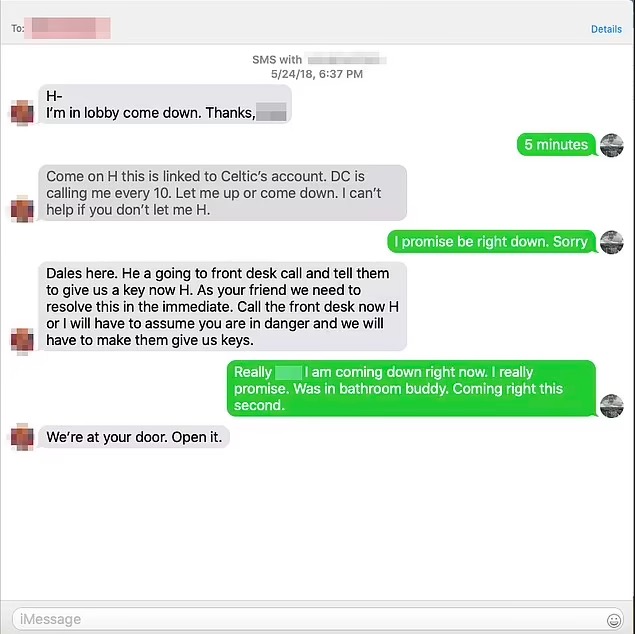 It’s unclear what exactly happens after that, but according to Devine, Hunter stayed up all night “logging into an encrypted government site, ‘secure.login.gov,’ a number of times until 4:04 a.m.”

As Devine notes, the situation at Chateau Marmont is a “glimpse into president’s son’s debauched lifestyle” but also “raises questions about how much his finances were mingled with Joe Biden.”

She asks, “Did one of the credit cards used to pay Yanna belong to Joe Biden? Was it a shared account?”

Can you just imagine the outrage if this had been Don Jr. or Eric Trump?

The degenerate son of the current President is somehow off-limits for criticism, but the Corporate Media was positively salivating with every tiny infraction — real or imagined — by the adult children of the former president.

Don Jr.’s Trump Tower meeting to get dirt on Hillary was wall-to-wall news, but Hunter? The Corporate Media is hellbent on reforming him. Hell, they’ve pushed his memoir and his “art” because his former income stream, influence peddling, is under scrutiny now that “the big guy” is actually in the Oval Office.

Hunter is now selling his paintings — which are done with the same technique that kindergartners use, paint blown with a straw — up to half a million dollars apiece to buyers who can remain anonymous. It’s a creative way to influence peddle and beyond criticism since so much of what is called “art” these days looks like it could’ve been created by a drug-addled degenerate. Like this guy: 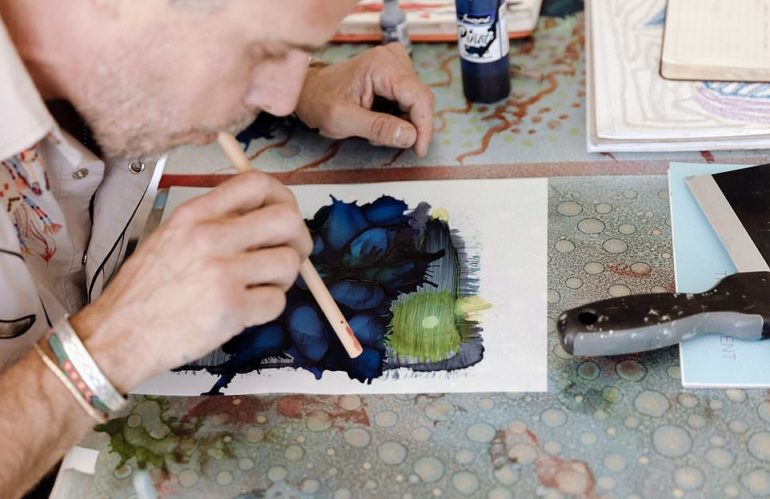 The only surprising thing about Hunter’s new “art” career is that he knew that a straw can be used to blow things out.