Is there media outrage over Hunter Biden (who could not have filed the paperwork to own a gun without committing a felony because of his well-documented history of illegal narcotic use) having his gun turn up in a garbage can near a school after a fight with a girl? Nope, but the administration is busy looking for new and creative ways fo cracking down on, and criminalizing law-abiding gun owners.

Was there media outrage over Hunter Biden throwing the n-word around as if he was tossing candy to the crowd from a parade float? Conservative Twitter EXPLODES After Hunter Biden N-Word Messages To His Lawyer

Nope. But we did notice how they made certain that Roseanne Barr got kicked off the air, the show’s title character killed, the show renamed, and the original series pulled from syndication because she had the audacity to notice a thin-skinned Obama-aligned political insider’s bad haircut resembled a certain 70s era movie character.

Well, there are plenty of damning things still lurking in that laptop of Hunter’s. It’s still coming to light in drips and drabs. Here’s the latest:

First son Hunter Biden used the racial slur “yellow” to refer to Asian women in a January 2019 text message to cousin Caroline Biden about getting fixed up with someone, according to a new report.

The January 26, 2019 conversation was preserved on Hunter Biden’s abandoned laptop and was first reported by DailyMail.com.

In a screenshot posted by the outlet, Caroline — the daughter of President Biden’s brother James — suggests setting Hunter up with one of her friends.

“Do you want foreign or domestic,” she asks at one point before adding: “I can’t give you f—ing Asian sorry. I’m not doing it.”

The next two messages from Hunter read: “Domesticated foreigner” and “Is fine.” The next message reads: “No yellow.” —NYPost

It doesn’t take much imagination to know how the media would spin this if the laptop had exposed such statements from a Trump son, rather than Hunter. But since this doesn’t help their team, they will carefully ignore it and downplay it. After all, the ‘heroic’ rehabilitation story of Hunter Biden is already underway. 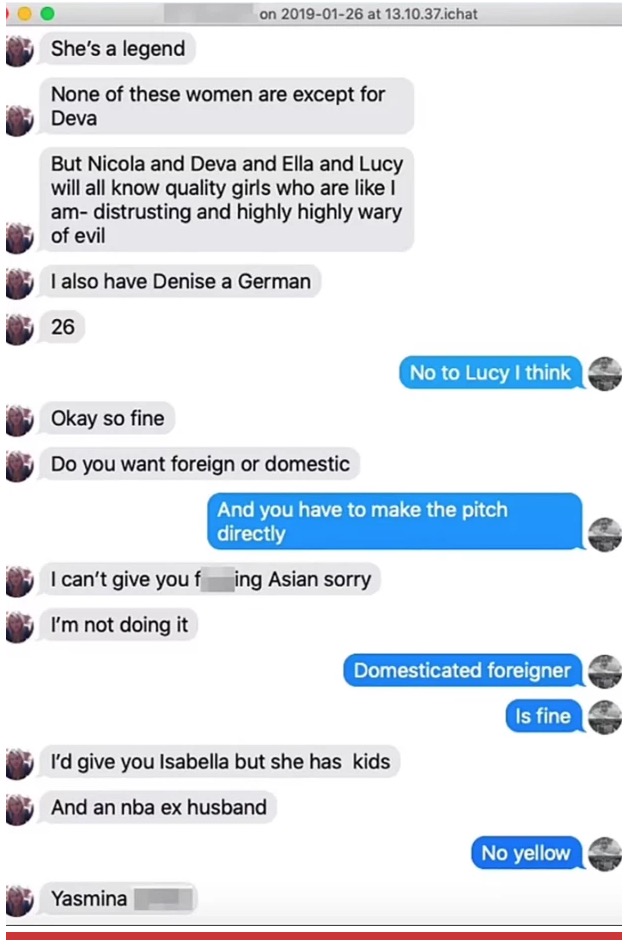 His cousin is helping crackhead Hunter get with some random hookups. But his cousin and her friends are ‘high quality’ girls and ‘highly wary of evil’.

If that were true, why in the hell would any of them want to be caught dead with Hunter? The man smoked Parmasean cheese, just in case it was crack, and had business dealings with some of the world’s sketchiest people.

But let’s take this back to his objectification of women.

At its core, this conversation is Hunter ‘shopping’ for sexual conquests, with race as the primary consideration.  Kind of a weird approach for someone so closely tied a political party that is, even now, pushing a narrative that any guy demanding that the woman he is dating should absolutely NOT have a penis is a ‘bigot’ and a ‘transphobe’.

Will his wanting a ‘domesticated foreigner’ (whatever that means) to bring to his bed trigger the pink-hat people to march in the streets?