Victoria’s Secret is attempting a massive reinvention of itself — redefining what “sexy” means to the brand in an attempt to broaden its appeal to customers.

The lingerie store is hanging up the “Angel” wings, branching out to sportswear, and bringing on a team of “leading icons” and “changemakers” who are more diverse in their backgrounds. The team will promote the brand on Instagram, appear in ads promoting the brand (likely not in the skimpy lingerie that the brand is known for,) and be interviewed on a 10-episode podcast being launched to help with the rebranding effort.

Included in the team are: 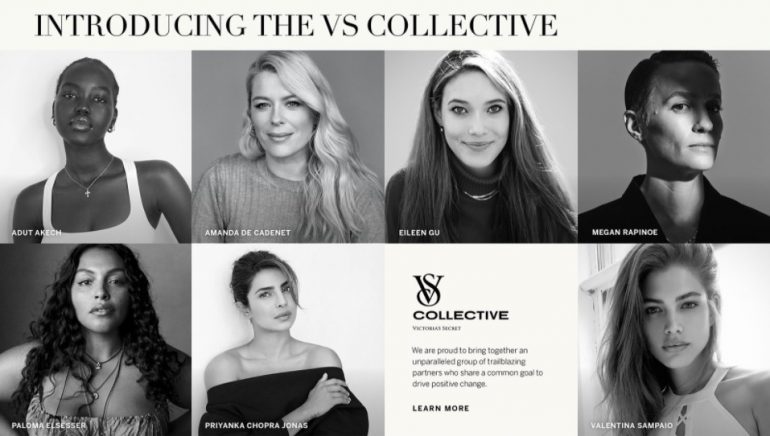 A podcast? Really? Why does a lingerie company need a podcast?

As a woman, I liked it better when Victoria’s “secret” wasn’t that she used to be a dude, and I’m probably not alone on that.

They will be spearheading what may be the most extreme and unabashed attempt at a brand turnaround in recent memory: an effort to redefine the version of “sexy” that Victoria’s Secret represents (and sells) to the masses. For decades, Victoria’s Secret’s scantily clad supermodels with Jessica Rabbit curves epitomized a certain widely accepted stereotype of femininity. Now, with that kind of imagery out of step with the broader culture and Victoria’s Secret facing increased competition and internal turmoil, the company wants to become, its chief executive said, a leading global “advocate” for female empowerment.

Will women buy it? An upcoming spinoff, more than $5 billion in annual sales, and 32,000 jobs in a global retail network that includes roughly 1,400 stores are riding on the answer.
Source: New York Times

Rapinoe said that the brand’s previous image was “harmful” because it was “patriarchal, sexist, viewing not just what it meant to be sexy but what the clothes were trying to accomplish through a male lens and through what men desired. And it was very much marketed toward younger women.”

So, they’re bringing on a man who has “transitioned” to be a woman in order to redefine what “sexy” is. Good luck with that.

The New York Times reports that it’s taken years for the company to acknowledge that its branding was outdated and the company took a hit as competitors flooded the market with “more typical women’s bodies and a focus on inclusivity and diversity.”

Martin Waters, newly-appointed Chief Executive of Victoria’s Secret said, “When the world was changing, we were too slow to respond. We needed to stop being about what men want and to be about what women want.”

The NYTimes also says that Victoria’s Secret is rebranding in order to distance itself from its perception as catering to “male fantasy” and a “widely accepted stereotype of femininity” of “scantily clad supermodels with Jessica Rabbit curves.” It’s also attempting to appease a post-MeToo society after it was revealed that billionaire owner, Leslie H. Wexner, had close ties to Jeffrey Epstein. The NYT says that the company took an additional blow in public perception after “revelations about a misogynistic corporate culture that trafficked in sexism, sizeism and ageism.”

NYT journos Sapna Maheshwari and Vanessa Friedman are making a case that rebranding is necessary and a good idea because of its history. They obviously have a disdain for the brand as they describe the Angels fashion show as “a sort of cross between a runway show and a pole dance.”

It’s fascinating how feminists who so often tout women being “empowered” to “embrace their sexuality” and promote “sex positivity” suddenly turn prudish when it comes to women buying lacey bras and panties. These are the same kinds of people trying to legitimize prostitution by calling it “sex work.”

Here’s the thing, though… while it’s wise for a business to expand and adapt when necessary, a complete rebrand like this will be extremely difficult. Just because Victoria’s Secret has decided to redefine what “sexy” means, that doesn’t mean that public perception will follow.

Rapinoe said, “I think functionality is probably the sexiest thing we could possibly achieve in life. Sometimes just cool is sexy, too.”

Millions of people would disagree with Rapinoe on that “functionality” statement. This is why men’s “tighty-whiteys” were mocked for years. What’s wrong with them? They’re “functional.” See my point?

What appears to be happening is Victora’s Secret wants to become a cross between Hanes and Lululemon but retain their name recognition. The thing is — those companies already exist and have a market. Victoria’s Secret was a whole other creature. Was it a bit myopic? Sure.

But this thing about VS being all about the “male gaze” is so utterly stupid. Sometimes, women actually like wearing something pretty and — I know this is shocking — some women even want to please the man in their life.

And these women know that otherwise, they’d be out there in sweats with no makeup and their hair in a messy bun 24/7. Why not? It’s “functional” and comfortable, and as Rapinoe said, that’s the “sexiest thing we could possibly achieve in life.”

Yeah, I’m gonna disagree on that one.