We’re told by the media that the new “woke” racialization of everything is The Way to get end racism. Are they sure about that?

Now, I admit, I’m not an expert in Critical Race Theory or so-called “antiracism”, I’ve only been reading about it for oh, 5 years now, and I have a long way to go. Still, it seems to me that the way that it’s implemented in many cases is to pathologize “whiteness” and excuse anti-white (and in some cases anti-Asian) racism in the name of “equity.”

While so many people on the Left are defending Critical Race Theory and saying that those who oppose it “just don’t understand it properly,” perhaps they should take a quick gander at the people who not only understand it, but are vocal advocates of it.

One such individual is Hunter Ashleigh Shackelford, an activist and artist, who seems to have embraced at least some of the premises of CRT wholeheartedly while sprinkling on her own bizarre “woke” ideas on top.

During an online “Solution Session” by Planet AfroPunk called “My Gender Is Black”, Shackelford said that she doesn’t “revere or consider white people at all” and that she has “completely divested from non-black people” and “will not teach a non-black person” because she doesn’t “believe that it’s actually possible.”

Hunter Ashleigh Shackelford is back and she is spreading her positive message to the youth of the black community. pic.twitter.com/IvWL8ckc5V

What does that woke word-salad even mean?!

Shackelford claims to be a…*checks notes*… “shapeshifter”? Is that an identity now? What, are we living in Star Trek or The Witcher or the new Loki show on Disney+ or something?

And she says she’s a “shapeshifter”? WTF? What does that even mean?Does she think she’s like Mystique or Martian Manhunter or something???

I’m sorry, but I just can’t take seriously someone who says that kind of nonsense.

Yeah, I realize that I’ll be the one canceled for mocking that because it’s totally rational to claim to be a “shapeshifter” and it’s absolutely anathema to question another person’s identity even if it is completely irrational.

If Shackelford looks familiar, you might remember her from a 2017 ClashDaily article where she said all white people are racists and demons and they should give her money.

Plus Sized Racist Says, All Whites Are Racists, Demons, And Must Give Her Money

It seems to me that her shape just hasn’t shifted all that much since 2017.

Here’s a video of Shackelford back before she “divested” from “non-black people” and was lecturing white people that they’re all racist and demons and were raised to not have humanity…and “PayPal me!”

“All white people are racist…”

“No, you’re always going to be racist, actually…”

Now Shackelford is calling herself nonbinary and going by the name Hunter Ashleigh. 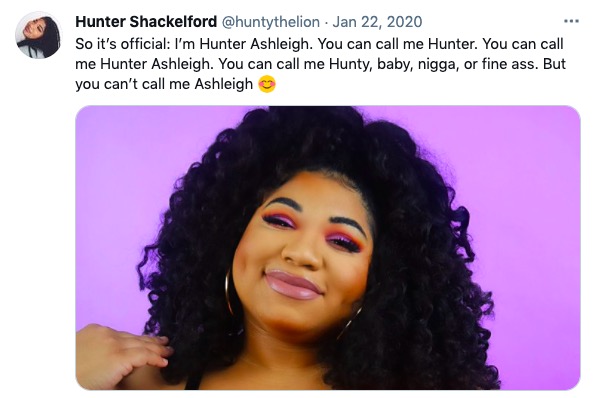 If anyone is wondering what problems we have with Critical Race Theory being implemented in schools…THIS IS IT. It breeds racism because it indoctrinates people into believing that there are groups of oppressors and groups of the oppressed all based on race. It’s antithetical to Rev. Dr. Martin Luther King, Jr.’s vision of America, and frankly, I like that one much better, thanks.

I don’t want to replace MLK’s vision for a united America with Hunter Ashley’s “woke” and overtly racist one. Now, I know she’s some fringe weirdo, but give it time. “The Squad” was fringe 3 years ago.

The left needs to get better role models.