The surge at the border that the Biden-Harris administration said would be slowing down is ramping up.

On Monday, approximately 300 migrants tried to force their way into the country near Del Rio, Texas while Border Control and Texas state troopers attempted to “hold the line.”

The violent confrontation began when US authorities, including state troopers, started admitting select migrant families through the gate and into the US. But soon, single adults and others not chosen attempted to force their way through the gate along with the families, making it hard for US officials to close the massive door behind each family.

Eight federal agents and police officers pushed back on the gate to prevent the hundreds of people on the Mexican side from pushing their way through. The majority of migrants attempting to get through the gate were men, according to a video recording posted to Twitter amid the commotion…

..Agents opted to allow families through the gate one at a time, but as soon as the gate opened, others in the back mistakenly thought the entire group was being admitted and tried to push those in front of them through U.S. authorities quickly pushed back to shut the gate, CBP said.

So… we’re just opening up the fence at random spots where families show up allowing them into the country to be “processed” as “migrants”?

They don’t have to come in at an official port of entry? And we’re being selective while a crowd of people all want the same thing?

Gee, could all of that mess be the problem?

It looks like it’s the “humane” border policy of the Biden-Harris administration is the thing that is causing this, and they’re actively rewarding the garbage parents who knowingly put their child through this. It’s disgraceful!

NEW: Getting a bit hectic here in Del Rio. Massive group of 300+ migrants wants to be let into the US. Some migrant families being let through, but adult men try to force their way through the gate. BP and troopers have to yell at them to get back. @FoxNews pic.twitter.com/7E4KIHmNVs

Another video from earlier. A Border Patrol agent told me this was the biggest single group he’s ever seen in Del Rio & that they’re glad troopers from Florida & Nebraska were here to help man the gate with Texas troopers. Almost all ended up being let into the US. @FoxNews pic.twitter.com/kwRAaAxofq

The next morning, RGC agents working near La Grulla, Texas, encountered a large group of migrants walking north on a ranch road after illegally entering the United States. The group of 298 migrants included 60 unaccompanied children. This has been the largest group of migrants encountered by RGV agents this fiscal year. Within this group, a subject exhibiting COVID-19 related symptoms was transported to the hospital. At the hospital, the migrant tested positive for COVID-19.

Sunday afternoon, RGC agents encountered another large group of migrants walking north on the same ranch road as the day prior. Of the 203 migrants, 127 are citizens of Honduras. The group consisted of 158 family members, 29 unaccompanied children, and 16 single adults.

U.S. Customs and Border Protection reported that the number of CBP interactions with migrants crossing the southern border illegally was a whopping 188,829 for the month of June. The Fiscal Year to date total is up to an astounding 1.2 million interactions with illegal migrants and these are just the illegal border crossers that we know of.

In June 2021, CBP encountered 188,829 persons attempting entry along the Southwest Border. This total represented a 5% increase over May 2021.

It looks like the soft warnings by Co-Presidents Biden and Harris of “don’t come yet” haven’t been heeded.

There have been steep increases in crossings since Joe Biden was elected in November. In the first few months of the administration, White House Press Secretary Jen Psaki said that the “challenges” at the border are “seasonal” and “cyclical.”

There was a 500% INCREASE in March border apprehensions compared to last year. pic.twitter.com/wbKjyP8yz0

That may have been the case before, but it doesn’t seem to be the case in 2021.

Here’s a chart by CBP that illustrates what is happening at the southern border. 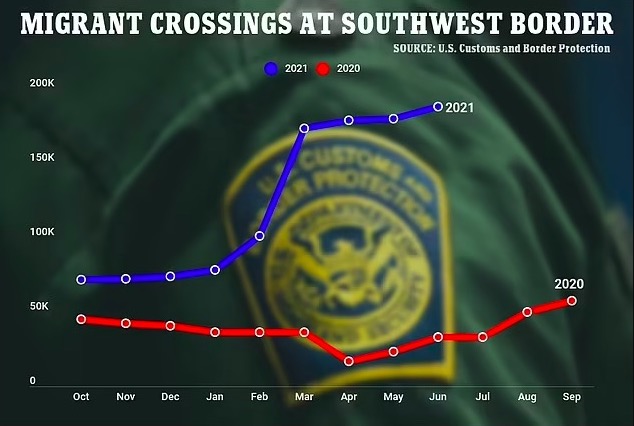 And of course, the Biden-Harris administration is pushing for amnesty — of perhaps over 30 million people who have crossed the border illegally.