One more “unintended consequence” of pandemic response measures is “immunity debt” which French scientists have described as “the failure to build up immunity against viruses that comes from normal contact.”

The spread of common viruses like the cold and flu, as well as other seasonal viruses were low in 2020 due to pandemic lockdowns, social distancing, frequent disinfection, sanitizers, and maybe even mask use. At the time, many “medical experts” were celebrating this as an achievement and suggesting that masks could be worn every flu season “to save lives.”

Some of these viruses are coming roaring back, including ones that mainly occur during cooler weather, are now spreading as lockdown restrictions ease around the world, and, unfortunately, they are putting a lot of people at risk for serious illness especially those who had little risk from the novel coronavirus — young children.

In the past few weeks, there have been outbreaks of Respiratory Syncytial Virus (RS or RSV) in New Zealand, the Netherlands, France, Africa, Australia, and Japan. In the U.S., the CDC issued a warning that there was a spike in RSV in the Southern states. The virus which normally shows up in cold weather is now spreading rapidly due to the “immunity debt” from not being around other people.

So, about that “slowing the spread” to “not overwhelm the hospital system” thing…

The U.K. is concerned that the 2021 winter spread of RSV, flu, and COVID-19, could bring their government-run healthcare system to “the breaking point” according to a recent report.

The Dutch are already seeing the consequences with hospitals in the Netherlands filled with kids with RSV. On Wednesday reported that all pediatric ICU beds in the entire country were occupied on Tuesday. One “young patient” had to be transferred to a hospital in Antwerp, Belgium, and surgeries have been postponed.

The RS virus is spreading so fast among children in the Netherlands that all beds in Dutch hospitals’ pediatric intensive care units were occupied on Tuesday. At least one young patient had to be transferred to a hospital in Antwerp, AD reports.

The RS outbreak started a few weeks ago in Rotterdam, and quickly spread to Amsterdam and surrounds, the Nijmegen region, and Limburg. The virus is particularly dangerous for young children, who can develop a serious respiratory infection. Some have to be hospitalized for oxygen, fluids or tube feeding. There are now seriously ill children all over the country and all 90 pediatric ICU beds in the country were occupied on Tuesday. 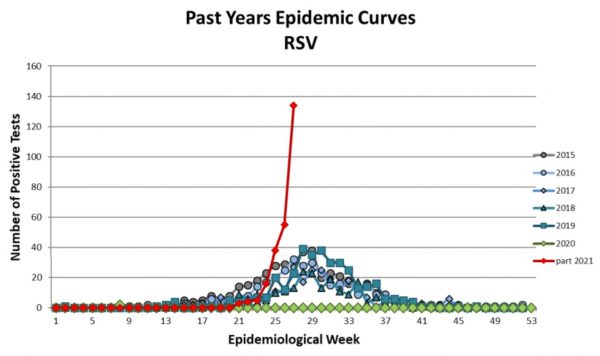 This situation isn’t going away soon, and other childhood illnesses could be coming back with a vengeance.

Doctors around the world who treat infections are getting ready for another year or two full of such anomalies. As people strove to avoid the virus that causes Covid-19, they ended up staying away from many other viruses and bacteria that cause common ailments—influenza, chickenpox, strep throat, RS virus and more. Now as normal life resumes in many countries, exposure to those bugs is returning, too.

RS virus, transmissible by droplets and contact with contaminated surfaces, is usually minor in children but occasionally leads to hospitalization. Because it can cause inflammation of small airways in the lungs, it is also a significant cause of death in the elderly.

At Maimonides Children’s Hospital in Brooklyn, N.Y., Rabia Agha, director of the pediatric infectious diseases division, encountered an RS virus wave this spring. She found the median age of infants treated was just 6 months, down from 17 months the previous season. The immune system of small babies tends to be weaker, so more of this year’s patients ended up in intensive care.

Dr. Agha thinks the difference had to do with mothers not being exposed to the virus while pregnant. Mothers pass on RS virus antibodies to their babies but only when they have had a recent infection, she said.

Since May, the number of cases has eased, but “RSV will definitely come back and attack a larger population because last season few children got infected,” Dr. Agha said.

Mathematical models by researchers at Princeton University suggest that substantial outbreaks of the RS virus and possibly seasonal flu may occur in future years, with peak outbreaks likely occurring in the 2021-2022 winter season in the U.S.

Dr. Cohen said another long-term concern involves the hygienist theory, which suggests that modern cleanliness contributed to the rise in allergies in wealthier countries by hindering the development of children’s immune systems. With Covid-19 lockdowns, “We may see more children with allergic asthma,” Dr. Cohen said. Other doctors said they considered such an effect unlikely after only a year of social distancing.
Source: Wall Street Journal

So, we may have some terrible spikes in illnesses that are deadly to children… all because we’re trying to prevent the spread of a virus that is not deadly to healthy children. 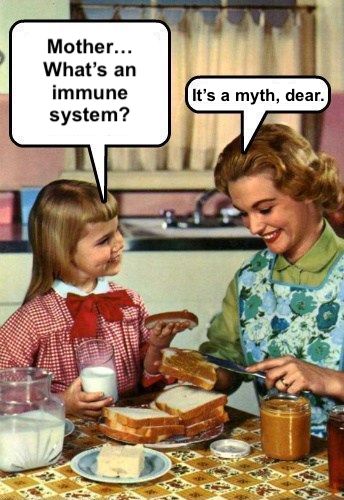