Remember all those calls to ‘pack the courts’? Well, the Dems can’t just charge in and change the rules immediately after they lost their SCOTUS advantage. They need an air of legitimacy first.

So the government did what it always did. They commissioned a study from a panel of ‘experts’ to solve the problem of a ‘politicized’ court.

Oh, so NOW the court system has a problem with being too politicized and emotionally charged? We don’t remember hearing anyone among the left complaining when The 9th Circuit and a whopping 164 cases overturned by Scotus since 2007. The runners-up, State Court and Sixth Circuit had 113, and 64 respectively. (Source Ballotpedia)

If you want to point a finger of blame there, maybe they could address the party responsible for baselessly claiming a sitting judge was a serial rapist, and swarming the Senate hearing with raging protesters. Or you could ask those who turned the name Bork into a verb, or the one guy responsible for famously turning the judicial nomination process into a ‘high-tech lynching of uppity blacks’.

If that guy is still looking for candidates for Jim Crow two-point-oh, he can check the mirror. Maybe he could even call the new version ‘Joe Crow’.

So, without much fanfare, a report on court reform has been released. It throws out a number of suggestions for change and reform. Some of them might even be worth introducing.

But we’ve all been in this game long enough to know that power politics is exactly that haven’t we?

Power is one of the places in life where that zero-sum game truly IS in play. For one person, party, group, institution, or even nation to gain power, it must come with a corresponding diminishing of power somewhere else.

By being arms-length, a group become less directly accountable to John Q Public, and less subject to the checks-and-balances upon which our system was built… which is precisely the problem we have with so many unaccountable bureaucratic government agencies who have gone rogue.

As you read this summary of their suggestions, ask yourself what tradeoffs the proposed changes introduce. For example, considering the heavy leftward bias in Academia now — to the point that law schools themselves have begun forbidding ‘wrongthink’.

Where will we draw our future lawyers and judges from, if not from such schools? Will they have been trained in the legal system itself to have adopted an inability to see political issues ‘from both sides’?

Free speech on American college campuses has been in a free fall for years. From high schools through law schools, free speech has gone from being considered a right that defines our society to being dismissed as a threat. According to polling, the result is arguably one of the most anti-free-speech generations in our history. The danger is more acute because it has reached law schools where future judges and lawyers may replicate the same intolerance in our legal system.

A recent controversy at Duke Law School highlights this danger. “Law & Contemporary Problems” is a faculty-run journal that recently decided to do a balanced symposium on “Sex and the Law” — including transgender issues — and asked Professor Kathleen Stock of the University of Sussex (who has criticized transgender positions) to participate. —JonathanTurley

There are 4 categories of proposed changes to the system as we now have it. (The title, the task force named, and the link to the full article are as follows.)

Above the Fray: Changing the Stakes of Supreme Court Selection and Enhancing LegitimacyBY TASK FORCE ON FEDERAL JUDICIAL SELECTION | FILED UNDER REPORT | JULY 08, 2021

They offer this overview of the document. 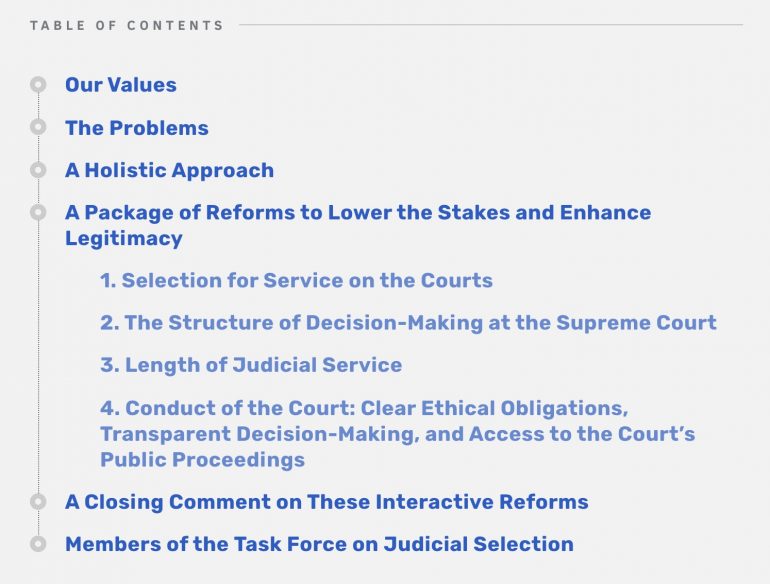 “The political stakes of judicial selection, especially at the Supreme Court level, have cast a shadow over the integrity of that process. The U.S. Constitution commits the responsibility of judicial selection to the President and Senate, which makes politics an inherent part of the process. But, under the present system, partisans have incentives to control the composition of the courts so as to try to affect the resolution of disputes in a way that furthers particular policy objectives and politics. This process distorts the actual and the perceived fairness and independence of the courts.”

They go on to list what they consider the dangers of great power in relatively few hands within the judiciary. (They acknowledge that similar dysfunctions can exist in the other branches, but that was beyond the scope of their task.)

Our packet of proposed reforms aims to alter some of the incentives that drive the current dysfunction. The U.S. Constitution requires the President to nominate federal judges with the advice and consent of the Senate. Further, the Constitution provides for judicial independence through protecting salaries and service during “Good Behavior.”1

But the Constitution does not set out criteria for selection of Supreme Court justices, and it does not speak to the number of justices on the Court, the place in which they sit while holding office, or their processes for decision-making. Our inquiry primarily focuses on how to adjust those aspects to try to lower the heat of nominations by altering the stakes of each individual’s selection. Judges and justices must be understood as public servants committed to a fair and impartial review of the facts and the law, and we believe that our approach will help advance that vital purpose.

They propose, among ideas, a process of screening applicants (similar to what Carter had during his administration), not unlike the process which has been adopted in many states, and other countries.

SCOTUS unilaterally decides what cases they will accept or refuse to hear. They can also serve for decades, with no obligation to step down so long as health and desire permit them to continue in their role.

[The study notes that the present power of the court is largely driven by the fact that they all sit together, and the public divides them into voting blocks of left and right, although both the unanimous consent on some cases and the single-person outliers in others have shown that (particularly on the right) are not so easily divided into orderly little factions.]

They propose changes — including expanding the court (historically known as court-packing) — and a shift to a process of panels where block voting will not exert the same influence.

They express concern about the significant power (over 80 defined duties) held by the Chief Justice… and how long that position remains in the control of that one person without cycling into the hands of another.

They suggest term limiting his role, altering the portfolio of responsibilities, or cycling it through to other people.

Space here prevents us from recounting all the changes proposed, but we encourage our readers to look through it themselves and ask which suggestions are worth applying (there are some good ones) and which are just a discreet way to shift the court left.

One thing that was NOT present in any of their suggestions was the obvious deterrent to any political shenanigans.

Wording insisting that any changes to a court’s overall makeup should not take place during the current presidential term.