Under the “Bad Orange Man”, we had energy independence and low fuel prices as a result. Now that the Shuffling Carcass of Mediocrity is in the Oval Office, that’s over.

Under Trump, we were exporting oil to other countries, and we were on the verge of building the Keystone XL pipeline which would have been a boon to both the United States, and Canada, who, despite their socialist tendencies, are at least closer to a functional Western democracy than some of those OPEC member countries like Libya, Venezuela, and Iran.

Since the moment he took office, Biden has undermined U.S. energy independence and the soaring gas prices are the result.

It began immediately after his inauguration when, with a stroke of a pen, he nixed completion of the Keystone XL pipeline via Executive Order. He did this to “protect public health and the environment” and restore “science” in order to “tackle the Climate Crisis.” Ironically, the Keystone XL would have been the world’s first zero-emission energy pipeline.

But that’s not all that Biden has done to undermine America’s energy independence.

In the same Executive Order on Day 1, Biden placed a “temporary” ban on drilling in ANWR which would have increased the use of the Alaskan pipeline.

He also halted energy development on federal land and shut down the 80 million-acre oil lease sale putting the Louisiana oil and gas industry in danger.

The result has been skyrocketing gas prices.

We also saw that Russian hackers were emboldened under Biden and hacked the Colonial Pipeline which caused general chaos due to shortages, high prices, long gas lines reminiscent of the Carter administration.

While Biden has been busy making America energy dependent to appease the Climate Cultists who don’t realize that the world still runs on fossil fuels, he’s now begging the thugs and bullies in the oil cartel, OPEC, to increase production to bail him out of the crisis that he’s created. 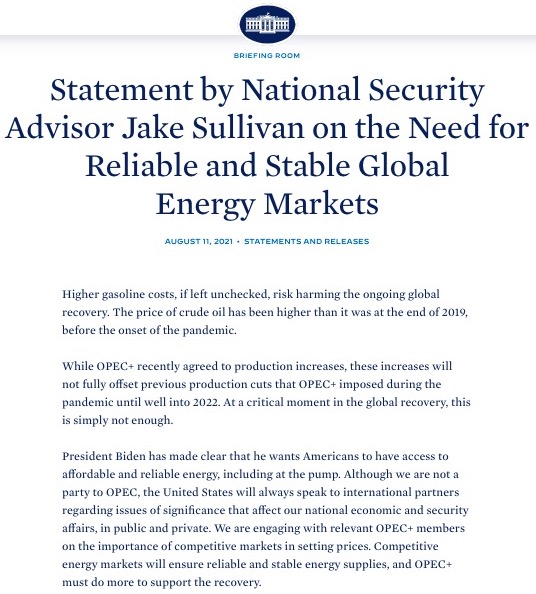 Absolutely incredible that it took Biden only 6 months to have America begging OPEC for oil while gas prices skyrocket. What a disaster.

From oil exporter to energy dependent in just a few short months. Way to go, Joe! It’s almost like he wants to be beholden to countries that despise America.

This was always the plan as we noted in this January 19 article:

But then, this has been obvious for some time to anyone who is paying attention.