In a statement on Saturday afternoon, President Joe Biden had said that the situation on the ground in Kabul was “extremely dangerous, and the threat of terrorist attacks on the airport remains high.” He added, “Our commanders informed me that an attack is highly likely in the next 24-36 hours.” The U.S. State Department warned American citizens and Green Card holders to stay away from the airport.

Early on Sunday, it was reported that the United States conducted a drone strike targeting an ISIS-K vehicle with “multiple suicide bombers” about 2 miles away from the Hamid Karzai International Airport in Kabul. The details were hazy and the Pentagon had stated that there were no reports of civilian casualties. (By “casualties” they mean death or injuries.)

There were additional reports of what was thought to be a separate incident of a rocket hitting a family home that left at least one child dead.

ClashDaily reported on that here:

Late on Sunday night, however, new details emerged and it appears that the drone strike that hit the vehicle also wiped out nine members of a family including six children.

U.S. Central Command issued a statement on Sunday night that said that they were “assessing the results of the strike” after reports of civilian casualties. The statement is suggesting that it wasn’t the drone strike per se that killed the family, but that “there were substantial and powerful subsequent explosions resulting from the destruction of the vehicle, indicating a large amount of explosive material inside that may have caused additional casualties.” 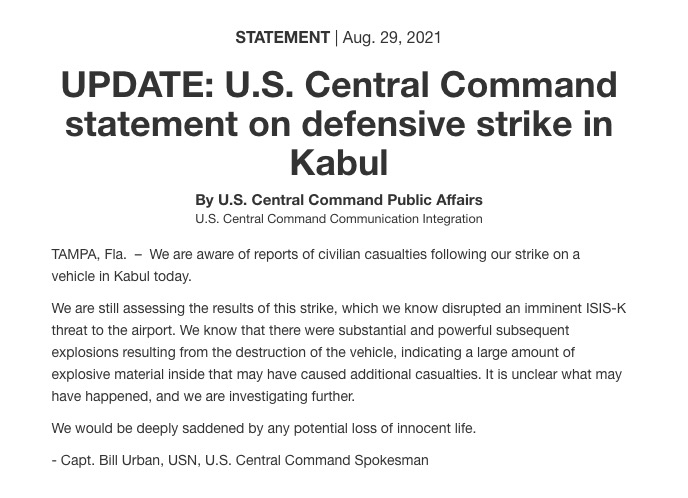 The United States carried out a defensive airstrike in the Afghan capital, Kabul, targeting a suspected ISIS-K suicide bomber who posed an “imminent” threat to the airport, US Central Command said Sunday.

The US military acknowledged later Sunday that there are reports of civilian casualties following the strike. “We know that there were substantial and powerful subsequent explosions resulting from the destruction of the vehicle, indicating a large amount of explosive material inside that may have caused additional casualties. It is unclear what may have happened, and we are investigating further,” Capt. Bill Urban, spokesman for US Central Command, said in a statement.

“We would be deeply saddened by any potential loss of innocent life,” he added.

The statement followed CNN’s reporting that nine members of one family, including six children, were killed in the drone strike, according to a brother of one of those killed, who spoke to a local journalist working with CNN. US Central Command said earlier they were assessing the possibility of civilian casualties.

The Daily Mail reported that “The Taliban said it welcomed the drone strike in an apparent sign of uneasy co-operation on security around the airport.”

However, the CNN report contradicts that claim. In their report, the Taliban condemned the strike. Taliban spokesman, Bilal Kareemi, told CNN that it was “not right to conduct operations on others’ soil” saying that the US should have informed the Taliban. “Whenever the US conducts such operations, we condemn them,” he said.

“All the neighbors tried to help and brought water to put out the fire and I saw that there were 5 or 6 people dead,” a neighbor told CNN. “The father of the family and another young boy and there were two children. They were dead. They were in pieces. There were [also] two wounded.”

One man told a journalist working with CNN who visited the compound that “a rocket hit and six people were in there who have been killed. There was a car inside.” The journalist was not allowed to enter the compound.

Another man said that he heard the sound of a rocket and gained access to the scene from a neighbor’s house. “First we managed to remove a 3- to 4-year old child. The fire and smoke had engulfed the whole area,” he said.
Source: CNN

The identity along with photos of the victims was being shared on Twitter late Sunday night.

“9 people, including 6 children killed. I want to confirm with complete responsibility, they were not members of ISIS-K.” pic.twitter.com/JfENQ3RD4i

Afghanistan’s TOLO News presenter, Muslim Shirzad, says that the family was that of an interpreter that worked with the U.S. military and lists names and ages of the victims.

9 killed by U.S rocket attack today in Kabul, who are they?

“We are not IS-K, world should hear us” a family member to me

Afghanistan’s Tragedy; I just spoke with member of this family in Kabul, they are originally from #Panjsher. He shared these photos with me.

“It was a rocket attack, 6 members of our family including my sister killed. we are not IS-K, we are ordinary people.” He said while cried pic.twitter.com/01MmOrfACC

Hi @JakeSullivan46! Did the Taliban provide the target data for your Kabul strike today that wiped out an interpreter and his entire family?

It appears the rocket hit one family. One was an interpreter for American troops. Another was supposed to get married tomorrow. He spoke with their family members regarding the attack: pic.twitter.com/o7NRrAF0iA

The U.S. did not kill members of ISIS in a drone attack.

This is Zamaray Ahmadi. He was an interpreter for the American troops in Afghanistan. He was killed in the U.S. drone strike. pic.twitter.com/h2L7uhRaFk

On Monday morning, the Middle East correspondent for the L.A. Times, Nibah Bulos, who spoke to the family tweeted that the photo was “believed to be” the one hit by the U.S. drone.

“It remained unclear Monday whether the drone strike was linked to the blast that hit Ahmadi’s car,” wrote Bulos.

A US airstrike in #Kabul was supposed to have killed #ISIS-K suicide bombers. Instead, it appears to have killed 10 civilians, including 7 children. Our story with @yamphoto. https://t.co/pJeqEmzMvY

This is a video of the vehicle we believe was targeted in the US drone strike. Again, please note we still do not know if it's the same one. pic.twitter.com/0Mx0Mk7okw

While it’s certainly possible that the Taliban would use the deaths of children as a propaganda win, the U.S. government is being very tight-lipped about the identities of the targets of the strike.

The Pentagon has refused to identify the two “high-profile” ISIS planners that were killed on Friday.

This administration is known for lying and incompetence, and reporters on the ground have spoken with the family.

It’s astounding that the bungled situation in Afghanistan could get even worse, but it appears that the Biden-Harris administration is adding “war crimes” to the list of horrible things they have done in Afghanistan.

And then… we learn that it appears to be even worse than we thought. The evacuation mission appears to be over earier than the Taliban’s “red line” that Biden had caved to.

congress briefed – gates closed at Kabul airport. 300 plus Americans and 1000s of our afghan allies left behind. STRANDED how can anyone in Biden admin keep their jobs?

For context, most of the efforts you’ve been hearing about are essentially coordination, not veterans physically flying in privately to extract people. https://t.co/2FlOMPug8k

This means that hundreds of Americans are now trapped there with no way out at the mercy of the Taliban as they engage in a turf war with ISIS-K.

I read this statement and just can’t believe what I am seeing. You conduct a drone strike inside a residential area using the most sophisticated technology and still sound utterly confused by what happened. And mind this is the polished and vetted public statement! https://t.co/TtesXykdaI

So Joe killed a bunch of civilians to make himself look like a tough guy?
Just imagine if this was DJT. CNN would be calling for him to be in front of The Hague. https://t.co/DKPb3moN4t

So Biden really topped this whole thing off with a war crime huh?

Looking forward to Doocy asking Psaki why the Biden admin wiped out an entire family in an air strike.

Democrats tried to impeach President Trump for a phone call and for holding a rally that turned into a riot.

The Biden-Harris administration’s actions just killed 9 innocent civilians, one of whom reportedly was an interpreter that worked with the United States government. That’s in addition to the bungled withdrawal that led to the deaths of 13 U.S. troops and at least 170 innocent civilians outside the airport after the suicide bomber and car bomb attacks by ISIS-K.

At some point, even Democrats are going to have to admit that Biden is incompetent… but then, that would mean a “President Harris” and I don’t know about you, but I don’t think I’m quite ready for that.