To the government, a citizen’s rights are disposable… even the Constitutionally-protected ones. That’s the big lesson the pandemic year has taught us.

Government overreach IS the threat our constitution was built to protect us from. This has always been the case.

Our government cannot be counted on to constrain itself.

Power is addictive, and any power seized over the individual, by the government, is power that government will not want to give back.

If a free citizen wants his rights respected, he will have to know them, and take a stand to defend them.

The next phase of the forever pandemic is for the government to insist that they have the right to put a gun to our heads and command us to take the vaccine. So much for their supposed belief that the government has no right to interpose itself over the sacredness of a decision ‘between a woman and her doctor’.

Now they think they can command all of us to submit to a vaccine that may or may not be in the best interests of any given individual.

One guy, going by the screen name of ‘Kaleb from Atlanta’, has put together a set of paperwork that makes a very detailed list of reasons why a devout Christian might object on religious grounds to participating in a mandatory vaccination push.

Here is a link to the files necessary for constructing an air tight religious exemption request for the COVID vaccine if it is mandatory for you. Dm if link doesn't work or you need help.https://t.co/zauDflSXeW 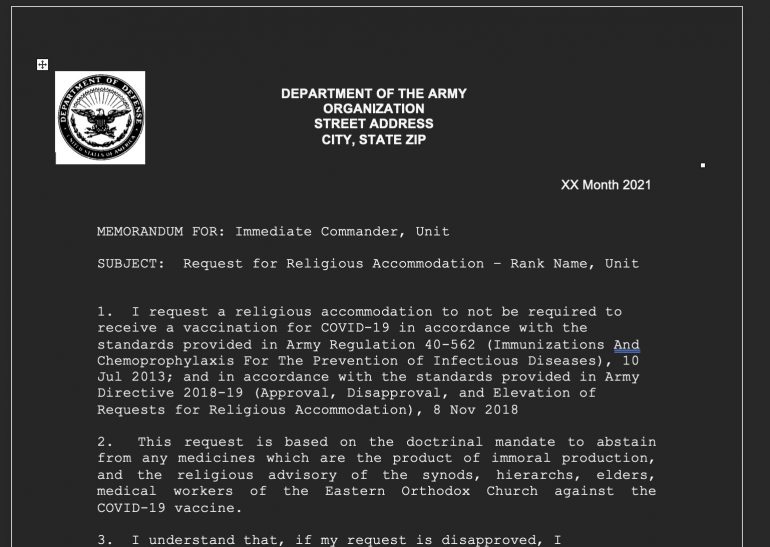 He has provided a set of links for military and also for civilian examples of religious exemption forms. If the Video gets pulled, he is directing viewers to a link below, where either of the two sets of forms could be downloaded as zip files. He has included some 65 numbered and linked citations for the case he is making in this document.

And if the original gets pulled down, here is another page that has his various documents where they can be directly downloaded available in both PDF and Word format.

Kaleb bases his objections on specific church teaching. Eastern Orthodox Christianity, in particular, has some explicit teaching covering this topic.

Since each of the vaccines available are documented as having made use of aborted fetal cell lines, Kaleb argues participation in this vaccine becomes an intrinsically moral question and not merely a medical one.

We haven’t run it past any lawyers — you may wish to do so if you plan on using it yourself — but at least it’s taking us in the direction of owning our own autonomy as free citizens in a country, and not just chattel of our government.

If that last sentence made you feel like standing up and shouting ‘Hell-Yeah!’, you might enjoy this related story: 8 Things Totalitarians Need To Strip Your Rights