Arnold Schwarzenegger has been a celebrity Icon longer than many of our readers have been alive. But he seems to have forgotten what it was that brought him to America in the first place.

He came to our shores with big muscles and bigger ambitions. He started a business, did well there. He took the fitness world by storm. He leveraged that into a Hollywood career, and married into one of the most politically connected families in America. He leveraged his fame into becoming Governor of the once-great state of California.

But, surrounded by ultra-liberal culture in the circles he walked in (and married into), it shouldn’t surprise us that he went all-in on a culture that isn’t afraid of using the iron rod of government compulsion to make the ‘little people’ do what their betters tell them to do.

It might be a good idea for this authoritarian to step outside his privileged bubble once in a while. That last time an Austrian blowhard went around telling people to forget about their freedoms and do what the government ordered them to do, it did not end well.

That reference to ‘responsibility’ came back to bite him, too.

For context, the clip above is the one people are worked up about. Below is the full clip with it’s context. You will notice his unquestioning confidence in ‘the experts’, despite the various concrete examples, we have of the ‘experts’ being compromised by political influences.

Yesterday while I was talking with @AVindman and @biannagolodryga about Alex’s new book, I was asked about my comment about COVID misinformation that all of you are sharing. Here was my answer: pic.twitter.com/8LKhPIJ1Eu

You can describe objective information derived from studies, or you can couch your guidance within the context of what powerful influencers (corporate, government or otherwise) want you to say.

The minute the public sees those lines have been blurred, they don’t know which of these loyalties are guiding any announcement that ‘expert’ may give, and any public trust associates with your area of expertise is forfeit. 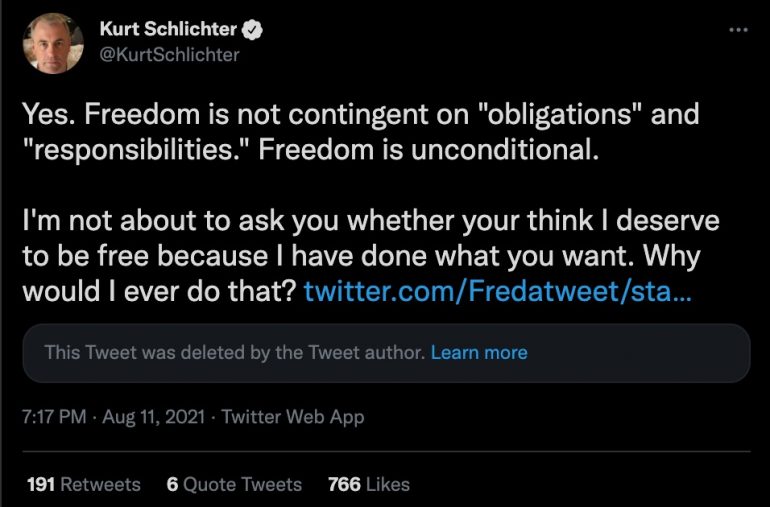 Those are the ‘serious’ responses. This one is not. But it took deadly aim at his ‘responsibility to others’ line.

That was self-inflicted, Arnold. Not your greatest day. For a guy so quick to trot out the ‘Nazi’ comparisons when scolding people you don’t like from the political right, you might want to keep your own authoritarian streak in check.

If you’re uncomfortable with the American concept of freedom, you are welcome to go find some place where there aren’t so many guaranteed freedoms with which other citizens might frighten you. China seems popular with the crowd you run with. You could try there.