After saying that she played a key role in Biden’s Afghanistan withdrawal decision, Vice President Kamala Harris has been strangely absent while he’s on vacation.

Who exactly is at the helm?

While the current President has said that “the buck stops” with him, from the very beginning this admin has insisted on branding itself as the “Biden-Harris Administration.” It’s almost like they’re trying to push an official “co-presidency.”

Although there’s clearly some bad blood between the Vice President and the First Lady, the “Biden-Harris administration” has insisted on sticking a smiley face on and presenting — to the public, at least — a united front.

Right up until the ambitious Veep’s political aspirations bubble up to the surface.

Back in April, Vice President Kamala Harris was trying to claim credit for the decision to withdraw troops from Afghanistan before the 20th anniversary of 9/11.

Vice President Kamala Harris confirmed Sunday that she was the last person in the room before President Joe Biden made the decision to pull all U.S. troops out of Afghanistan.

In an interview with CNN’s Dana Bash on “State of the Union,” Harris was asked about being the last person in the room regarding major decisions, something that Biden has said is important to him in his working relationship with the vice president. Harris confirmed that was the case regarding the move to pull U.S. troops out of Afghanistan by Sept. 11.
Source: POLITICO

So, where is she now?

She hasn’t been making public appearances much lately.

A Fox News headline on Monday read, “President Biden, VP Harris avoid the cameras as Kabul falls to Taliban.” The article noted that Harris has “avoided appearing on camera as Kabul, the capital city of Afghanistan, fell to the Taliban on Saturday and Sunday.”

Joe Biden is hiding, Jen Psaki is on vacation, Kamala Harris is MIA, and this is how the “not an evacuation” is going in Kabul after the Biden administration told us they had weeks to complete a mere reduction in civilian diplomatic staff. https://t.co/KZkkzUYbsu

We’ve seen how the Biden-Harris administration’s bungled pull-out and the rapid advance of the Taliban have left an absolute disaster in Afghanistan.

There are thousands of Americans left stranded, thousands more Afghanis (and their families) who helped U.S. troops for 20 years, and the Afghan Christians who are will likely face persecution, forced conversion, or death.

The Biden-Harris administration has issued an evacuation order to all Americans and urged them to go to the airport in Kabul but “cannot guarantee” their safety on the journey.

The below note went out this afternoon to American citizens requesting to be evacuated from Afghanistan, @alanacbs reports. It instructs people to come to Hamid Karzai Intl Airport in Kabul, but says the US govt cannot guarantee their safety as they make the trip. @CBSNews pic.twitter.com/rgEyjGup4K

You’d think that the first female Vice President who was chosen because she is a visible minority woman would be more concerned about one particularly vulnerable group — the women and girls in Afghanistan.

Back in March, Harris addressed the United Nations and said, “the status of democracy also depends fundamentally on the empowerment of women.”

The Taliban will likely enact the same extreme 6th Century Islamist ideas on women that they did when they held power before the War on Terror. For years they’ve burned down schools that were teaching girls as they claimed territory.

Before they made it to Kabul, the Taliban were already conducting public beatings of women in captured areas.

So tragic video, the #Taliban again started beating women among the crowd in their captured areas.

This time the Taliban are more brutal than they were in the 1990s.#SanctionPakistan #SaveAfghanistan pic.twitter.com/fJBCSVDLW2

That’s why women are desperate to get out.

This video of a young woman begging American soldiers to let her into the airport has gone viral.

This young Afghan woman is begging an American soldier at the airport to save her. This breaks my heart because I know that the American government gave them hope, but is now leaving them alone and hopeless. This is called betrayal. pic.twitter.com/EhVcNgNFyq

This young woman knows what happens to her if she stays.

The Taliban is already going door-to-door and taking girls age 12 and up as “wives” for Taliban fighters.

With the Taliban’s rapid advance, many women in Afghanistan are fleeing their homes, fearing murder, rape and forced marriage. pic.twitter.com/cOJC0g4ikf

It’s so bad that even the generally feckless United Nations is concerned about the human rights violations against women and girls happening now in Afghanistan.

WARNING: GRAPHIC CONTENT – ‘I am particularly concerned by accounts of mounting human rights violations against the women and girls of Afghanistan, who fear a return to the darkest days,’ said U.N. chief Antonio Guterres after the Taliban took over https://t.co/pThnUHNQVN pic.twitter.com/P17v4gVVyK

Here is the UN Refugee agency discussing how it’s women and children that are hardest hit by a Taliban takeover.

The human toll of spiraling hostilities in Afghanistan is affecting civilians, especially women and children. pic.twitter.com/rH4IupYGmR

A BBC journo asked the Taliban what they thought of women’s rights. Here’s what happened:

The Taliban is literally erasing images of women by spraypainting over murals.

Yesterday Taliban spokesman Zabihullah Mujahid, made headlines by claiming that they respect women’s rights. But today this is the reality in #Kabul: first they erased photographs of women then they’ll remove women from public sphere. pic.twitter.com/hkc4CJUKxm

There are women there that are standing their ground, and it’s unbelievably brave.

Afghanistan’s brave women protest in Kabul today against the Taliban

(@womenncri: The Iranian Resistance has repeatedly said, the godfather of fundamentalism is sitting in Tehran & the only way to ensure peace/security in the ME is regime change in Iran) pic.twitter.com/Ra2zMtWJBl

Bestselling author Don Winslow had a take that is difficult to disagree with.

We should have given the guns and training to the women of Afghanistan.

They have all the courage.pic.twitter.com/6l71CcBOu4

After the November 2020 election, Malala Yousafzai, the advocate for girls’ education globally who was shot in the face by the Pakistani Taliban after an exam for her activism congratulated Kamala Harris on Instagram for being one heartbeat (or a 25th Amendment declaration) away from the Presidency. She posted a photo standing next to Cackling Kamala. 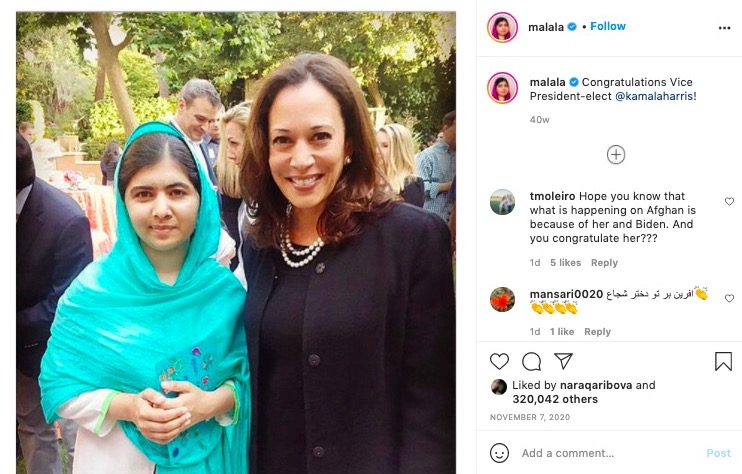 Malala is now very concerned about what is going on in Afghanistan, especially as it relates to women and girls.

Here is her statement:

Nobel Peace Prize laureate Malala Yousafzai says she is “deeply concerned about the situation in Afghanistan right now, especially about the safety of women and girls there.” https://t.co/xv8tHA1Uz8 pic.twitter.com/TSQL3QOhcP

But where is her buddy, Kamala?

What about Kamala’s statement?

The Biden-Harris administration’s United Nations Ambassador, Linda Thomas-Greenfield, said that the U.S., through a “very strongly-worded press statement” from the U.N. Security Council, made it clear to the backward Islamists in Afghanistan that “we expect the Taliban to respect women’s rights.”

?? Ambassador Linda Thomas-Greenfield says U.S. expressed "in no uncertain terms" at the United Nations through "a very strongly worded press statement" from the Security Council that "we expect the Taliban to respect women's rights" and "to be respectful of humanitarian law." pic.twitter.com/32TEyRFu4O

But where is the first female Vice President’s “very strongly-worded statement”?

She doesn’t have to roll out the welcome mat for refugees like the administration has done at the Southern border, but perhaps taking a stand for basic human rights for women in Afghanistan would be a good thing for her to do.

The best she did was a pair of tweets with no mention of the Afghan women and girls that are going to be forced into sex slavery and second-class status.

For two decades, our courageous servicemembers put their lives on the line in Afghanistan. We will always be grateful—and proud.

Ending U.S. military involvement in Afghanistan is the right decision.

We went to Afghanistan almost 20 years ago. Now, our mission is to get our people, our allies, and vulnerable Afghans to safety outside of the country.

Is she so lazy in our era of slacktivism that she can’t even be bothered to issue a statement about the horrors that are going to be inflicted on anyone female in Afghanistan?

Could it be because “Cackling Kamala” laughs when she’s faced with an uncomfortable question?

Seriously, she hasn’t been this absent since Republicans and a few members of the media were asking when she was going to visit the Southern border.

Does she have COVID?

Is she trying to hide until this blows over? If that’s the case, it’s going to be a long wait. The images of the U.S. embassy in Afghanistan with the Taliban flag flying ahead of the 20th anniversary of 9/11 is going to be difficult to hide from.

According to White House staff, Afghanistan isn’t the crisis that Harris wants to address.

Shade War going hot – Kamala refused a request to do a presser today. Said she was focused on Haiti not Afghanistan. Now staffers for the rival teams have been openly fighting all day, per WH official

That’s just too bad for her.

This mess should hang around her neck like an albatross.

She wanted the credit, so she should take it.

The women and girls forced into sex slavery by the Taliban under the guise of “marriage” can all see that the U.S. Vice President Kamala Harris was silent.

Her silence is deafening.