The article has not been removed and the headline is still deceptive. It’s shameful.

This is the kind of thing that would get lesser-circulated news sites a “misleading” label by fact-checkers and a label on the Tweet. Neither of those things have been applied in this case.

The left and the corporate media have gone all-in on vilifying Ivermectin as a treatment for the Coronavirus.

There have been stunning amounts of dishonesty about the drug itself and its use as a possible treatment for the Chinese Virus.

One story that was shared widely was about a rural hospital in Oklahoma that was so overwhelmed with Ivermectin overdoses people were being turned away.

MSNBC’s Rachel Maddow tweeted quotes from an article about this alleged spate of Ivermectin overdoses. 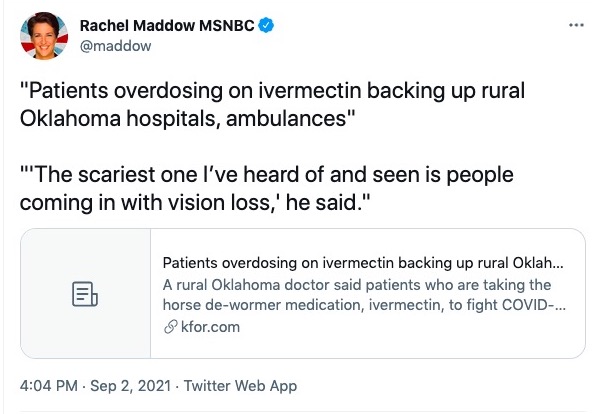 The story was quickly picked up by Rolling Stone and was suspect from the headline branding Ivermectin as a “horse de-wormer.” The entire article was based on the account told by Dr. Jason McElyea, who identified himself as an employee at Northeastern Hospital System Sequoyah.

The rise in people using ivermectin, an anti-parasitic drug usually reserved for deworming horses or livestock, as a treatment or preventative for Covid-19 has emergency rooms “so backed up that gunshot victims were having hard times getting” access to health facilities, an emergency room doctor in Oklahoma said.

“The ERs are so backed up that gunshot victims were having hard times getting to facilities where they can get definitive care and be treated,” McElyea said.

The Rolling Stone story was spread widely by a number of blue-check leftists. 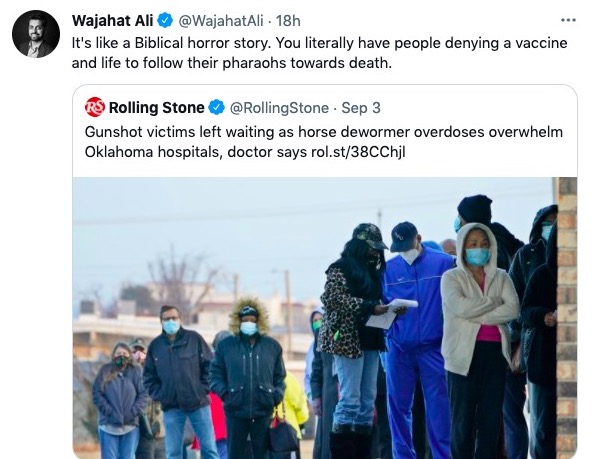 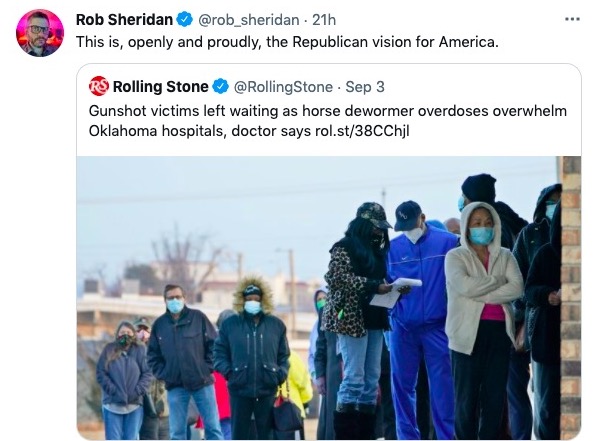 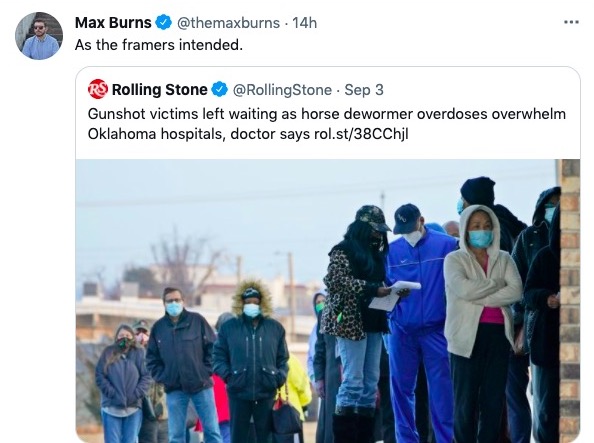 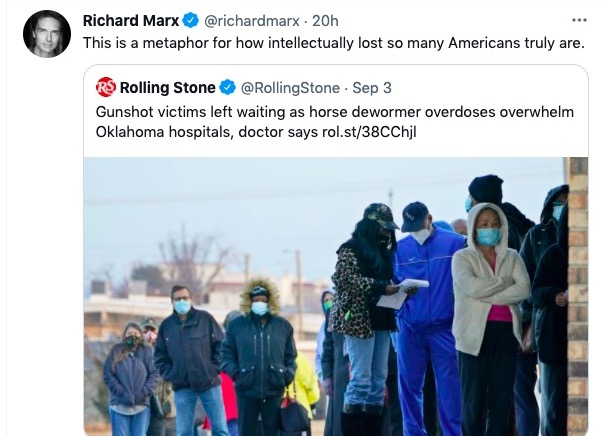 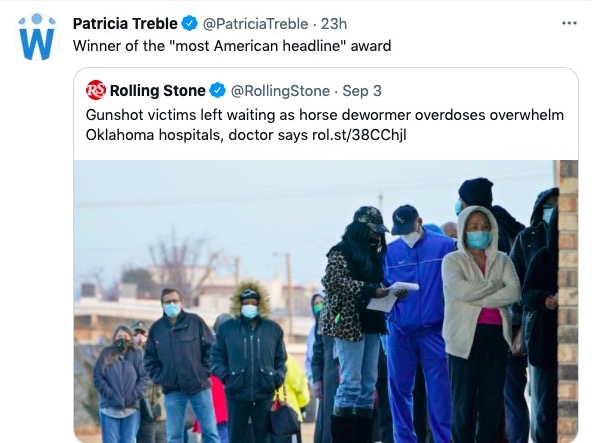 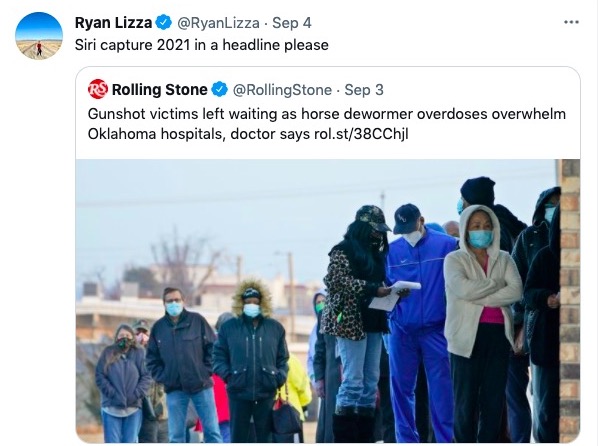 The number of resistance libs who will spread totally made up, debunked crap because it confirms their priors is staggering.

The source was discredited, the hospital came out and said it was crap, but @Twitter let’s it stand and libs spread it anyway. https://t.co/VbzZGbDUuj pic.twitter.com/GqOODdnJIW

An Organic Chemistry Professor at Cornell who is a libertarian called B.S. immediately.

And even these two globally prominent nutballs fell for the Oklahoma-based Ivermectin story. pic.twitter.com/WQ88GSo4w3

He’s right about that stock photo. It’s from a January article in the Associated Press about people in Oklahoma lining up to get the vaccine. The winter coats were a tip-off. 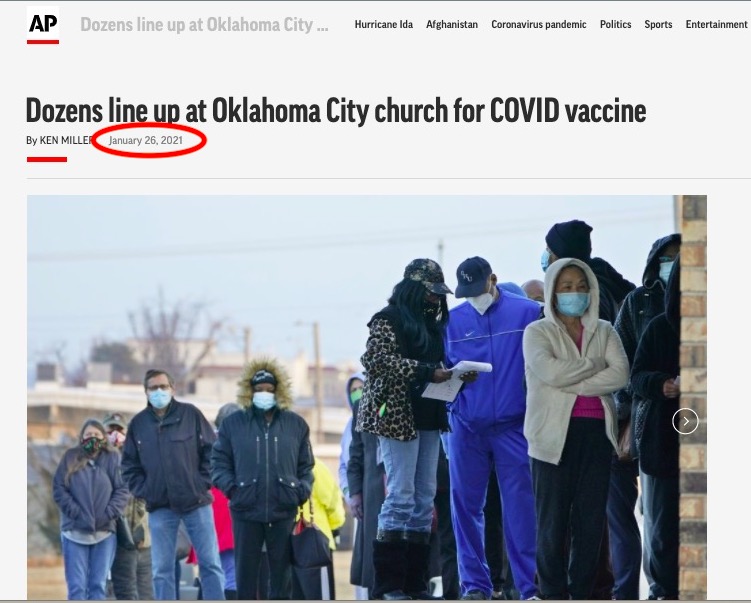 Here’s the thing… it appears that nobody bothered to check with the hospital.

After the story was spread widely, the hospital issued a statement. 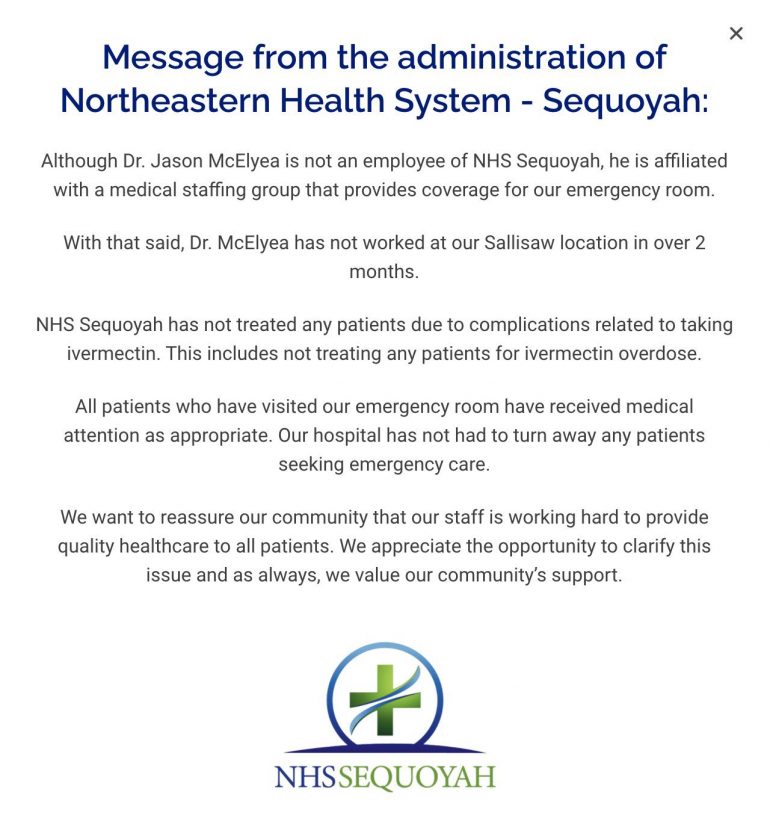 Rolling Stone issued an “update” that basically says the entire story is bunk based on an account of a doctor who hasn’t worked at the hospital in more than two months.

UPDATE: Northeastern Hospital System Sequoyah issued a statement: Although Dr. Jason McElyea is not an employee of NHS Sequoyah, he is affiliated with a medical staffing group that provides coverage for our emergency room. With that said, Dr. McElyea has not worked at our Sallisaw location in over 2 months. NHS Sequoyah has not treated any patients due to complications related to taking ivermectin. This includes not treating any patients for ivermectin overdose. All patients who have visited our emergency room have received medical attention as appropriate. Our hospital has not had to turn away any patients seeking emergency care. We want to reassure our community that our staff is working hard to provide quality healthcare to all patients. We appreciate the opportunity to clarify this issue and as always, we value our community’s support.”

Rolling Stone seems to have learned nothing after pushing the Duke Lacrosse rape hoax.

Let’s hope that they get sued again. Maybe another lawsuit will teach them.

As for calling Ivermectin a “horse de-wormer” — it’s rather disingenuous.

Is it used on livestock? Yes. Should humans take the livestock paste version? Hell no!

That’s because Ivermectin can be prescribed for humans. Unfortunately, just like hydroxychloroquine, the vaccine-pushers like Saint Fauci, don’t want to discuss the efficacy of therapeutics and are banning them for use for COVID.

Remember, Dr. Facui was fearmongering about AIDS spreading through “routine close contact” in the 1980s and shunned the idea of therapeutics in treatment to push for the development of a vaccine. There is still no vaccine for HIV, but it is now treated with a multi-drug cocktail which has seriously reduced deaths. He appears to be taking the same approach to the Chinese Coronavirus.

Ivermectin has been called a “wonder drug” with multiple uses and the scientists who discovered it won a Nobel Prize. It is used as an anti-parasitic in animals, but it has also been used in humans to treat parasites and has shown some success against viruses. It also has very few reported serious side effects if taken properly in the 35 years that it has been prescribed.

A 2011 paper published on the National Center of Biotechnology Information (NCBI), a division of the National Institute of Health (NIH), calls Ivermectin a “wonder drug” on par with penicillin and aspirin. The paper deals with the human use of Ivermectin and states that although it was originally used for treating parasites in livestock, it was “quickly discovered to be ideal in combating two of the world’s most devastating and disfiguring diseases which have plagued the world’s poor throughout the tropics for centuries. It is now being used free-of-charge as the sole tool in campaigns to eliminate both diseases globally. It has also been used to successfully overcome several other human diseases and new uses for it are continually being found.”

The dishonest framing of the drug as a “horse dewormer” started spreading rapidly around the same time as popular podcaster Joe Rogan announced in an Instagram video on September 1 that he had tested positive for COVID-19.

Rogan said that he felt tired and feverish, and he “knew what had happened.” He said that with regard to treatment, he “threw everything at it” including using ivermectin.

In an Instagram update on September 3, Rogan said that he tested negative for the virus.

Here is a typical way that it was reported:

It looks like Joe Rogan’s drug cocktail worked, much to the chagrin of the leftists who wanted him to be knocked down with the virus… or worse.

In the report, there was no mention of the many human uses of Ivermectin including that it has been successful in treating River Blindness in sub-Saharan Africa, Ecuador, Colombia, Mexico, and Guatemala.

Because it’s an inexpensive drug to produce, the drug company, Merck, has been giving it out free to the poorest of the poor to treat parasites for decades.

Ivermectin has saved the sight of tens of millions of people in the Third World since it has been handed out, and has been called a “miracle drug” but the left wants to insist that the stupid red-state people are taking a medication that treats parasites in livestock and are overdosing on it.

That claim at the very end of the video that if there was an effective treatment that doctors from all over the world would be prescribing it… yeah, about that…

It’s funny how all those “black and brown” doctors in places with low vaccination rates are advocating for using Ivermectin to treat the virus and it’s being discouraged by Dr. Fauci, the CDC, and the FDA.

Merck is discouraging using the inexpensive drug Ivermectin for COVID, but also issued a statement that they are developing a new drug — that they’ll patent — to do exactly what some studies have shown Ivermectin is currently doing in countries that can prescribe it.

ClashDaily has covered discussions by scientists about the possible use of Ivermectin as a treatment for the Coronavirus for some time.

Bret Weinstein spoke to Dr. Tess Lawrie who created a meta-analysis of Ivermectin studies done around the world showing that it may prevent serious illness from SARS-CoV-2.

Here’s a clip of that interview:

The full interview can be seen on Odysee here.

The problem is that we can’t have rational discussions about anything anymore. The left isn’t concerned about truth, for them it’s all narrative. And the narrative here is that the dumb hicks in red states will take livestock deworming medication instead of a novel vaccine with no long-term data that is less effective than the “experts” said it would be because they’re just so stupid.

The truth is that some people are trying a “miracle drug” that has been used for 35 years with few side effects because even with a vaccine we still need to have treatment of the virus due to breakthrough cases.

The left will tell you that they’re the ones that are “trusting the science” but they can’t even admit that Ivermectin has been given to millions of humans safely.

And they don’t care that they’re doing it. It’s the narrative, not the truth that matters to them.