While the Biden administration twists itself in pretzels trying to convince the world that the Taliban are the ‘good’ guys, the facts on the ground tell another story.

Dem party faithful are carrying the water that international pressure will be brought to bear on the Islamist Taliban to make sure they show proper respect for human rights, including women’s rights.

Yeah, that ‘international pressure’ sure has done wonders, hasn’t it? The Taliban’s regime is on the precipice of having a seat at the UN — for women’s rights issues, no less. 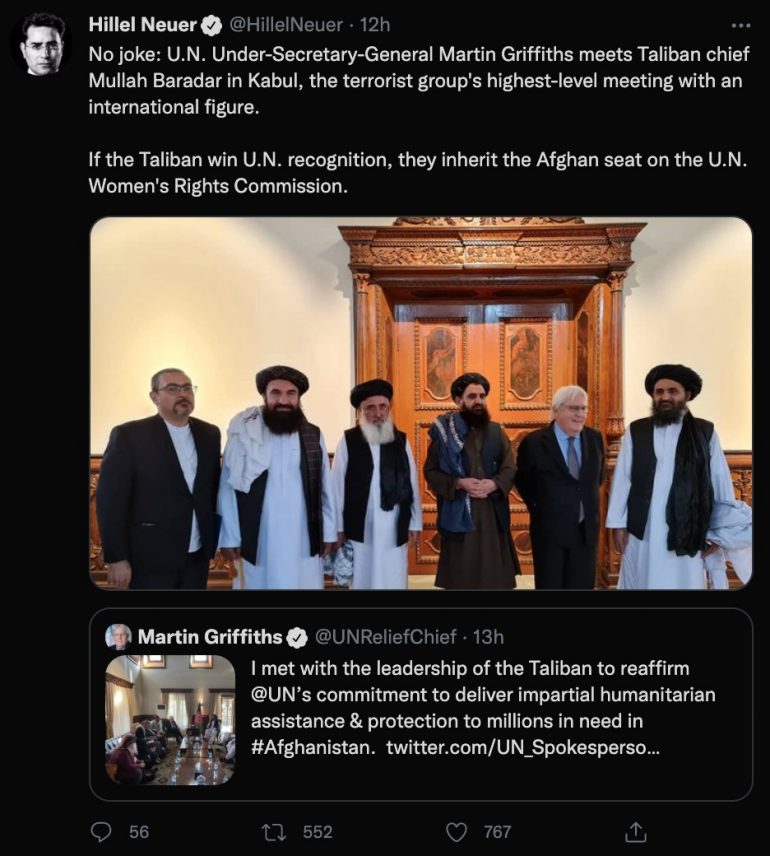 This shouldn’t really come as a surprise to us, seeing what the UN has become in their other ‘rights’ advocacy groups.

She participated in women's protests in Kabul today for equality. This is what the Taliban did to her.

The name of this Afghan women's rights activists is Narges Sadat

Remember that pretense of an ‘inclusive government’ the Biden administration assured us was certain to follow Joe’s unconditional surrender? Only a great fool could have believed such a promise.

There was a women’s march in Kabul on Saturday, the second in 2 days. It ended very abruptly. They laid a wreath to honor soldiers fighting the Taliban and continued their peaceful march to the Presidential palace.

Flanked by fellow demonstrators, Sudaba Kabiri, a 24-year-old university student, told her Taliban interlocutor that Islam’s Prophet gave women rights and they wanted theirs. The Taliban official promised women would be given their rights but the women, all in their early 20s, were skeptical.

As the demonstrators reached the presidential palace, a dozen Taliban special forces ran into the crowd, firing in the air and sending demonstrators fleeing. Kabiri, who spoke to The Associated Press, said they also fired tear gas. —CBS

If reports like this one accurate, a number of women there are very much in harm’s way, including some who are in danger for no reason other than having cooperated with our military.

Jack Posobiec posted this message he was sent by someone Jack describes as an active-duty US officer. 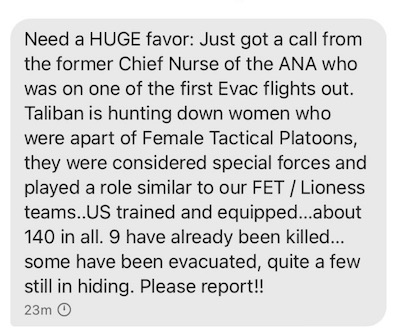 Meanwhile, Europe has begun down the road of acknowledging the Taliban as the legitimate leadership of Afghanistan, and beginning the normalization of relations with them.

The women in America like to scream at the sky over petty politics in America. Will they have any to spare for women whose lives are in danger by a society that actually DOES all the things they pretend Republicans want to do to them?

While women here are pretending to be victims, they have nothing to say about the real deal overseas.

Kudos to the Afghani women taking a stand, and paying the price for their courage in the process. That’s badass.