Democrats didn’t listen when we warned about the real human cost of their radical open borders policy. This is the human face of their arrogant denials.

The wave of human carnage at the border keeps rising.

It’s not just the car crashes with overloaded unsafe vehicles, althought that IS an issue.

It’s not just the human smuggling or the dramatic rise in fentanyl and other drugs which have spiked fatal overdoses across America.

Sometimes, even a big, important story won’t get any attention until you can put a human face on it. After all, the NYTimes was able to help Stalin sweep his mass murder of the Ukraine under the rug for a long time by passing off a State-ordered genocide as a conventional famine.

But here is a story that will put a very human face of the enormous price border-jumpers pay to help Democrats bypass the legal immigration system and controlled border by deliberately overloading the system with ILLEGAL immigrantion.

Is there something far worse that the ‘separating families’ narrative they tried to push against Trump? Yes. Burying them is infinitely worse.

A heartbreaking photo shows an 11 year-old migrant girl carrying her three year-old brother through the desert hours before she and her mom died of heat exposure after crossing the US border from Mexico.

Maria Jose Sanchez was snapped by her mother Claudia Marcela Pena toting toddler brother Cristian David Morales on August 26, shortly before the mother and daughter’s tragic deaths after they got lost in the searing heat of the Sonora Desert near Yuma in Arizona.

Pena made a frantic call to 911 in Sonora, Mexico, after crossing into the US with a ‘coyote’ people smuggler who then abandoned the family, and pleaded: ‘Please help me.’

…Cristian was found next to his mother and sister’s bodies hours later, after 911 officials in Mexico contacted US Customs and Border Protection.

Pena and Maria were both deemed to have died from heat exhaustion, with no signs of violence found on their bodies. It is unclear what supplies the family had brought with them for their journey.

Christian was rushed to a nearby hospital for treatment, and survived his injuries. He is now being cared for by social services in California.

…Pena traveled from her home in Colombia to make the illegal crossing in a bid to be reunited with husband Victor Morales, who lives in Florida, Telemundo reported. — DailyMail

Some of their last words were recorded on that 911 call: ‘Mommy, I’m hungry, and the response, ‘soon, my love.’

Here they are at an airport in Mexico. It isn’t as if they marched across the continent. They flew to Mexico and walked across the border. 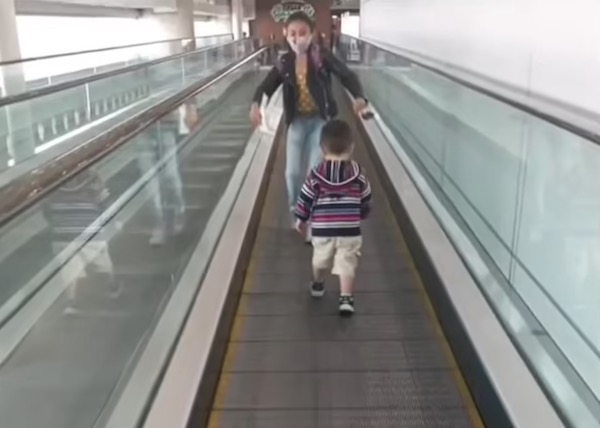 Joe and Kamala’s policies have incentivized countless people like Maria to risk illegal entry rather than arrive through legal ports of entry. Now she and her daughter are dead.

Instead of dreaming about what she will be when she grows up, or who she might marry, this eleven-year-old spent her last moments dying in a desert.

Because their blood is on her hands.