This is despicably low even for the inhuman basement-dwellers in the Corporate Media.

The paper ran an op-ed titled, “Larry Elder Is The Black Face Of White Supremacy: You’ve Been Warned.” 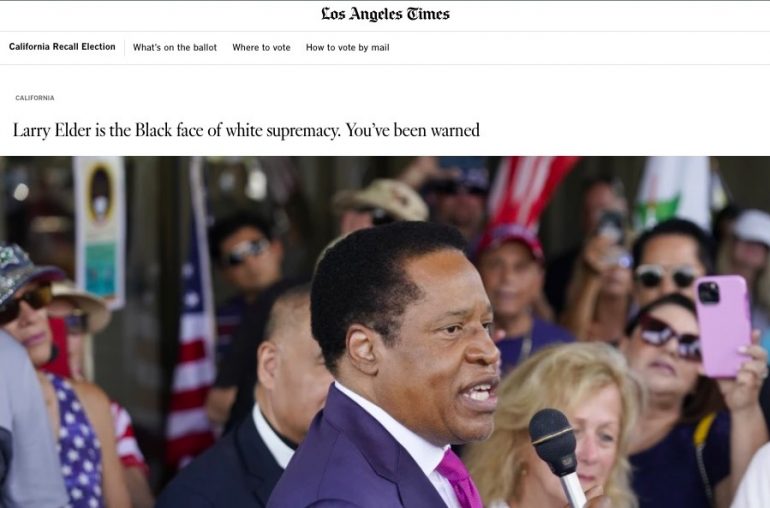 During a real meeting of the minds, Jean Guerre, an L.A. Times opinion writer (who did not write the aforementioned piece), appeared on Reliable Sources the show hosted by CNN’s resident eunuch potato, Brian Stelter. Guerre doubled-down on Elder as pushing “white supremacy.”

It would be amusing how stupid these people are if they weren’t in positions where they have the power to persuade the masses.

Far too many people get their news just from headlines and, as the saying goes, “a picture is worth a thousand words.”

When the woman in the gorilla mask tossed projectiles at Elder’s head when he was walking through Venice the other day, the L.A. Times didn’t bother to mention that in their article. They called it a “hostile reception.”

They were called out for the way they handled it but didn’t seem to learn a thing. In the follow-up story about the LAPD investigating the incident, the photo that they chose to use had nothing to do with the headline.

They used a photo of Elder’s bus arriving in Venice and greeted by a number of people including Venice Neighborhood Council General Board member Soledad Ursua. Elder approached Ursua, hugged her, and lightly touched her cheek.

The photo the L.A. Times used was one that made it appear as though Elder had slapped the Ursua on the face. 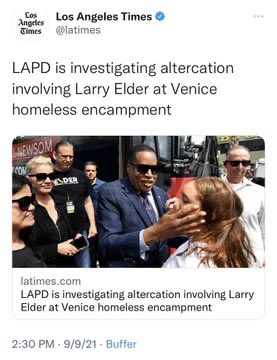 It’s pretty clear that the intent was to paint Elder as an abuser of women and that he was the one being investigated by the LAPD.

Ursua was outraged and called them out on it on Twitter. 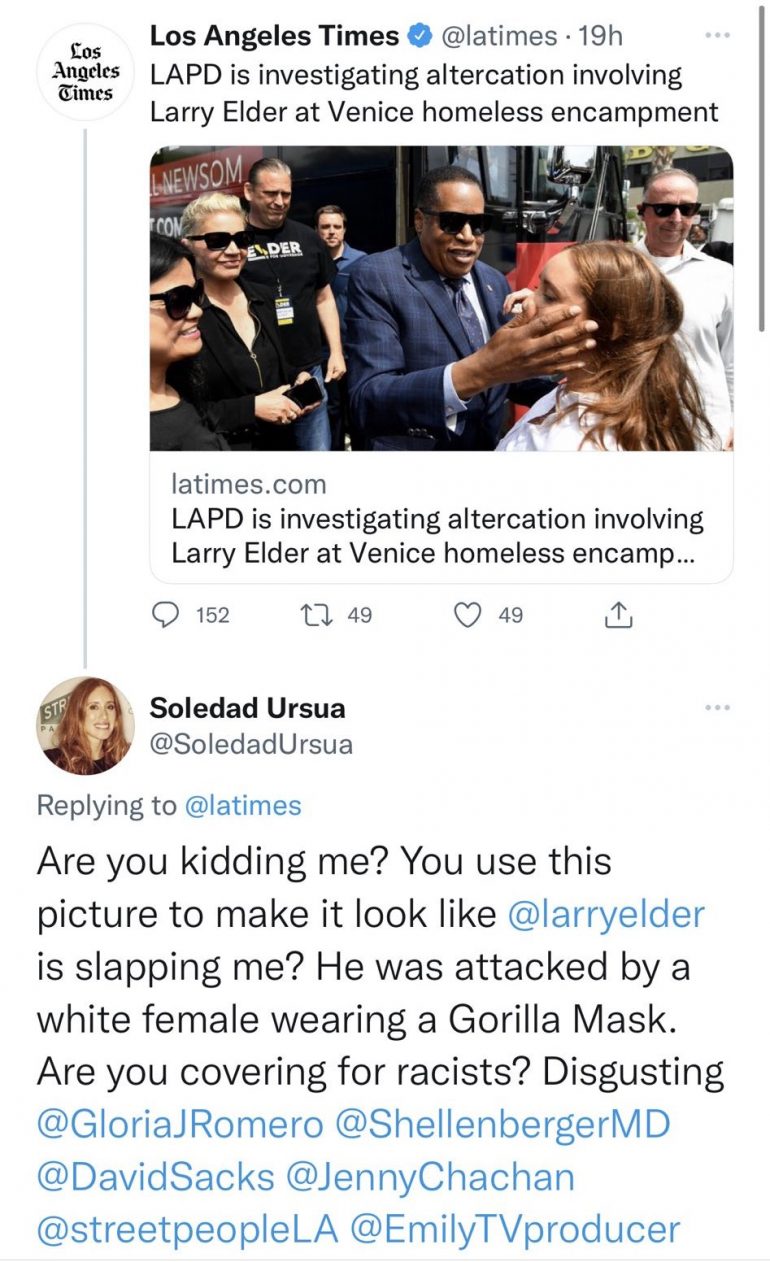 She then posted the video of what was happening when that photo was taken which completely vindicates Elder.

And here is the video showing me and @larryelder hugging upon his arrival in Venice. He did not slap me as @latimes headlines/photos have implicitly suggested pic.twitter.com/6Ywi1t8YbH

It’s absolutely shameful that the L.A. Times was trying to make Elder seem like the perpetrator when he was the victim of a hate-motivated incident.

The video evidence posted by Ursua was then picked up by other media outlets.

The LA Times was shamed into changing the photo to reflect that Elder was the victim of the crime.

But they still didn’t really cover the disgusting treatment that Elder received from the crowd as he walked down the street.

Some profane heckling of Elder as he walks past homeless camps in Venice pic.twitter.com/rVepYyeSx6

You’d think that they’d be celebrating the idea of the First Black Governor of California, but they can’t because he doesn’t have the right politics.

The L.A. Times will insist that it’s Larry Elder, the libertarian-leaning, right-wing, black man who is the racist threat.

It would be great if these coastal elite libs took some time away from posting their hot-takes on Twitter and developed some self-awareness.