During her stint as California’s D.A., Kamala Harris threatened to jail parents for the truancy of their kids. When she was running to be the Democratic nominee, she backed a fund that bailed out violent felons.

Something is not quite right with these two positions.

On June 1, 2020, Harris tweeted, “If you’re able to, chip in now to the @MNFreedomFund to help post bail for those protesting on the ground in Minnesota.” 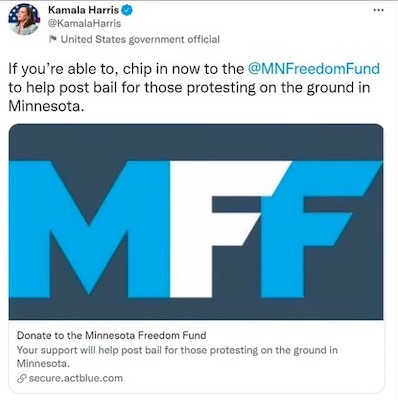 ClashDaily reported last August that the Minnesota Freedom Fund (MFF) was so flooded with cash after prominent Democrats like then-Senator Kamala Harris promoted it, that the non-profit was bailing out some questionable characters.

It seems that things haven’t changed much.

A Minneapolis man who had been charged with domestic abuse and had his bail provided by Minnesota Freedom Fund (MMF) was charged with murder weeks after being released.

George Howard, 48, was bailed out by the Minnesota Freedom Fund (MFF) on August 6 after being held on a $11,500 on charges of domestic abuse.

Weeks later, Howard was charged with murder when he shot another driver on I-94 during a road rage incident on August 29.

The victim has been identified as 38-year-old Luis Damian Martinez Ortiz who was pronounced dead after he was shot in the chest by Howard.

Back in our original ClashDaily story from 2020, the fund was so flush with cash that all of the minor offenders had already been bailed out, so they were just posting bail for anyone.

The fund’s interim executive director, Greg Lewin, says it isn’t about the charges–it’s about bailing out people who can’t afford it themselves. Lewin said, “I often don’t even look at a charge when I bail someone out. I will see it after I pay the bill because it is not the point. The point is the system we are fighting.”

This is the same as AOC’s position on prisons — she claims that the “system” itself is racist and must be abolished.

Kamala Harris from 2013 probably would have tried to toss the 2020 version of Kamala Harris in jail for being aiding and abetting a criminal or something.

After all, when she was District Attorney, she was famous for fighting to keep nonviolent criminals behind bars.

Here are a couple of examples:

During her time as California’s Top Prosecutor, there were nearly 2,000 people locked up for marijuana possession.

Here she is laughing about jailing parents for their kids not going to school.

Kamala Harris at an event hosted by the Commonwealth Club in 2010, explaining her decision as San Francisco DA to get tough on truancy.

Kamala Harris continued on to describe how she’d brought charges against a single homeless mother of 3 who was working 2 jobs because her children were truant…and this was a success story. pic.twitter.com/FT5uJmI6x9

For Kamala, threatening to jail parents because their kids aren’t in school is amusing and a good thing, and so is supporting a bail fund that bails out violent offenders.

Just like everything else with the Biden-Harris administration, it makes no sense whatsoever.