Dems are using the NYC flooding to grandstand. Silwa has been taking a different approach.

When the last dregs of Hurricane Ida washed through the Big Apple, many residents and employees were faced with devastating flooding, with 13 people losing their lives in the process.

Now, people are looking for someone to blame.

This sets up a story of two political hacks, a meteorologist, and an unusual sort of man running for mayor of NYC.

AOC, predictably, has jumped on this opportunity to peddle her Marxist dystopian dream… the one blasted by a co-founder of GreenPeace.
‘Hooked On Government Money’: Greenpeace Co-Founder Who Mocked AOC Calls ‘Green’ Scientists Corrupt 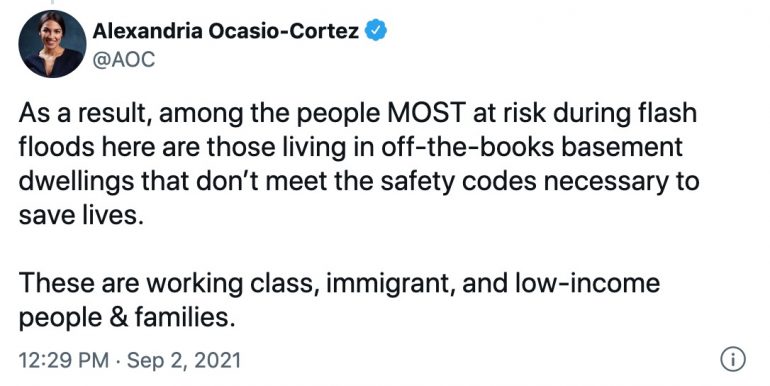 We could go down a rabbit trail about how rent control and other left-wing ‘solutions’ which she would favor tend to punish landlords, discourage rentals, make rental units more scarce and jacking up prices.

But that’s a whole other conversation that her rigidly ideological mind won’t have any room for.

Here's AOC encouraging her followers to engage in "organized rent strikes" because capitalism is to blame for people making money off of "just owning property." pic.twitter.com/GWGd004DTa

That said, AOC was not wrong about danger faced by NYC residents in basement apartments.

“There was absolutely no warning. I wasn’t expecting water from my own drain to be the one that’s going to kill me,” Rivera said, her voice shaking with emotion.

Rivera’s arms and stomach were still bruised from when her son had to yank her out through a basement window as it filled with water that bubbled up from her drains Wednesday night.

“This is a nightmare. A disaster,” Rivera said, noting that her home also flooded in 2008. She said city officials told her at the time that they’d make sure it never happened again. —NYPost

Not to be outdone, Chuck Schumer did his best impersonation of the Prophet Jeremiah. 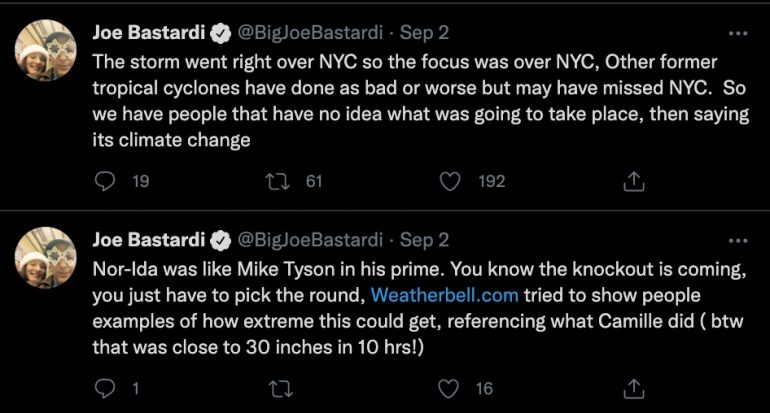 While deBlasio, AOC & Schumer came for a photo op, Curtis Sliwa took the time to speak with the people ravaged by the flooding. To understand what's going takes time, but that's what being Mayor of the best city in the world, New York City, demandshttps://t.co/OU1jOQifKE#NYC

If you click through to the video, you’ll hear some of the locals telling Sliwa that Schumer and some agency bigwigs came there with an entourage of reporters, smiled, took some photos and left. AOC ‘held court’ there. But Silwa wasn’t like that. He talked to every one of them. The local folks in that video call him ‘just a normal guy’.

It would be easy to blow that off as just a more elaborate photo op or political positioning than AOC and Schumer if it weren’t for the way he showed a genuine heart for suffering people. Not long ago, a political stop at Penn Station was interrupted by a homeless guy.

Sliwa was directly addressing the situation with homelessness, and the mental health needs of that group when, seven minutes in, a guy with no shirt stepped between Silwa and the reporters covering his stop, yelling out something the mics didn’t quite pick up, looking angry and standing with his hands on his hips. (The interruption starts at about the 7:10 mark, notice what he’s talking about just before that.)

Security offered to escort the man away. But Sliwa stopped them from doing so, smiled, and took a moment to hear his story. That act of genuinely listening to the man’s story completely changed the dynamics of the meeting. Then he asked the question:

Would you rather be somewhere else than Penn Station? The man broke into tears right on the spot. Sliwa put his arm around the man’s shoulder, as he bared his heart to a crowd of strangers.

Ask yourself: can you imagine Chuck Schumer getting that close to a homeless guy? Would Nancy Pelosi or AOC have told security to stand back while they take the time to hear his story? What about De Blasio? And yet all of those people proclaim themselves the great defenders of the little guy. And that’s easy to do so long as the ‘little guy’ is a generalized ‘them’ and not a particular ‘him’.

But Sliwa doesn’t have to tell anyone how much he cares. Others see him in action and come to that conclusion on their own.