It’s a little early, still, to say for sure that accusations against General Milley are accurate, seeing who the sources are, but if they check out, this is YUGE!

Pelosi has been throwing around the word ‘coup’ and wrapping herself in the flag with every cheap shot she could possibly dream up to take against Trump.

Not only did we learn that her team helped coordinated powerful interests work together to ‘fortify’ the last election, but we are now hearing about an actual coup that happened in the last year.

No, we don’t mean January 6th. Even the FBI isn’t calling that an insurrection. But that fact alone doesn’t mean that there no insurrections going on at the time.

Remember how those of us who were paying attention reacted with astonished outrage that Pelosi and company were trying to wrest control of the nuclear codes, contrary to any Constitutional authority? We covered that here, on January 9th. NUTTY NANCY: Pelosi Says Trump Is ‘Unhinged’ And Shouldn’t Have Access To The Nuclear Codes

We likened it to a coup d’ etat then. How much worse is it if there is truth to the allegation that General Milley was having covert backchannel conversations with his counterpart in China to undermine the duly-elected President’s authority.

There is a REASON that a single, elected, and accountable civilian is given final authority over the military in our system. It is to prevent ambitious military men from seizing control of the state and acting in their own personal or military interests, rather than the best interests of the nation as a whole.

Here’s Trump reacting to the allegations that Milley was undermining him in contact with Democrats and his Chinese counterpart as early as October of last year.

And Pelosi was in on it. 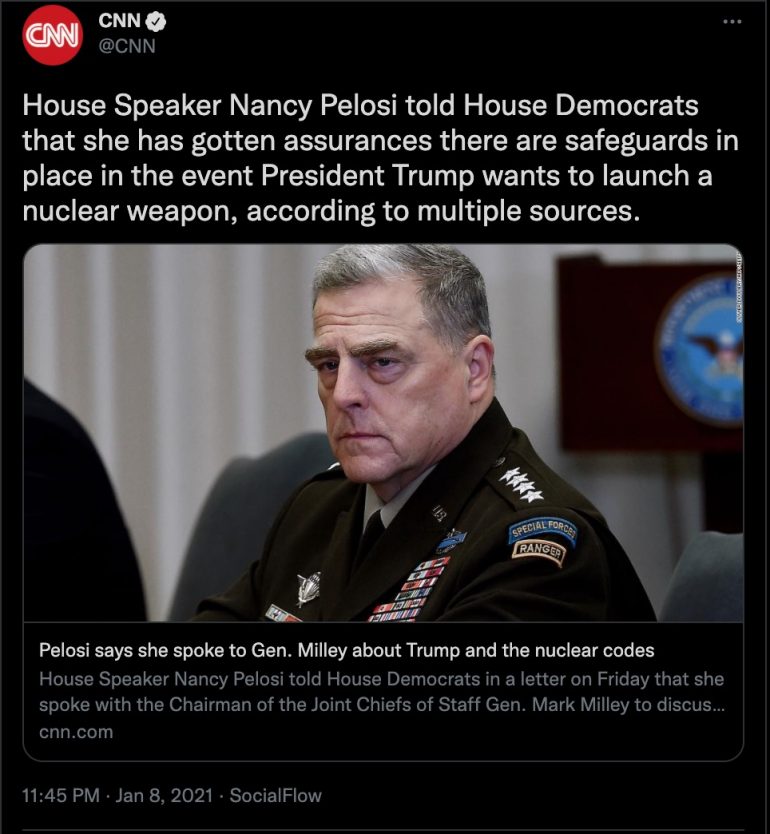 Trump is the first President in decades to not launch a new war. He forged a peace deal in the Middle East. He held North Korea in check for 4 years. He exercised restraint in using cyber and economic pressure rather than military strikes when retalitating against Iran.

Trump is anything BUT a war-hawk. Even the shows of force he used were calculated and limited in scope. See: Syria, or the MOAB he dropped on the heads of terrorists hiding in the mountains.

There is no possible justification one might make to suggest that Trump was leading America into war. In fact, if Woodward’s account can be believed, Milley’s real opposition to Trump was (supposedly) because he wanted to bring our forces home from Afghanistan.

Fast forward to this summer when, under the term of Biden and Milley, we have questions rising about the reckless droning of an aid worker and his family, while crowing about killing a terrorist ‘mastermind’.

After abandoning tens of billions of dollars of military equipment — not to mention stacks and stacks of US cash — in Afghanistan, Biden is in the process of giving these terrorists ‘aid’ money, like a chump.

The media on the left is hailing Milley like he’s some kind of a hero.

Only one explanation makes sense: they hate Trump more than they love America, and the Constitution.

How else could they turn a blind eye to behavior that may have put Milley in peril of swinging from the end of a rope, had it happened under Washington’s presidency?

Meanwhile, General Flynn required a pardon to release him from charges that were based entirely on fabricated evidence.