On September 22, the Canadian province of Ontario implemented a requirement for proof of vaccination to be shown for a variety of “privileges” and it’s already causing problems.

The Premier of Ontario, Doug Ford — brother to the beloved yet infamous crack-smoking (now deceased) Mayor of Toronto, Rob Ford — had initially rejected the idea of a “vaccine passport” because it would be divisive. A few months later, he flip-flopped and instituted one. He says that it’s a “temporary” measure that will be imposed to “slow the spread” of the Deadly Delta Variant™ and to avoid lockdowns.

That phrase “slow the spread” seems to ring a bell — gee, where have we heard that phrase before?

As of Wednesday, September 22, it is now a requirement in the province of Ontario for everyone ages 12 and up to show proof of vaccination and a government-issued ID to enter restaurants, bars, nightclubs, gyms, sports facilities, movie theaters, and other venues deemed “high risk” for the spread of the virus.

No one wants another lockdown. Our government wants all businesses to remain open and safe. We’re all in this together, so please be patient as we roll out Ontario’s Vaccine Certificate Program.

On the very first day, an elderly woman was denied indoor dining at a McDonald’s location in Toronto because she didn’t have her proof of vaccination with her.

The woman said that she “had something stolen” but shows a government-issued ID card and says, “I have had my vaccine.” The McDonald’s employee tells her that she needs to see her proof of vaccination as well.

The annoyed employee tells the man to stop filming the incident, but he says, “No, this is an important issue.”

This elderly lady did not have “her papers” and was rejected from dining in at a Toronto McDonald’s. She pleaded but was given no mercy, sent out to cold rain instead. @BLNewsMedia @fordnation @JustinTrudeau #segregation #CovidVaxExposed #COVID19 #CovidVaccine #VaccinePassport pic.twitter.com/4tJdcy8uTO

In his tweet, he said that the elderly woman was forced to eat outside in the rain.

I do feel bad for the McDonald’s employee here — and all of the other service industry workers who have suddenly become enforcers of an awful authoritarian mandate. It’s not their fault that their government sucks. They didn’t sign up for this and they can’t just “go get another job” this is a government requirement for most public places in Ontario.

Wednesday morning’s confrontation at McDonald’s wasn’t the only issue. The Ontario government website was down for maintenance while Ontarians tried to get their “papers” in order to participate in society.

Early Wednesday morning, Ontarians trying to access the province’s website for proof of COVID-19 vaccine receipts were met with an error message.

The Ministry of Health said the portal was temporarily down in the morning due to “routine maintenance, not due to demand.” Weekly maintenance is scheduled overnight on Tuesdays from 11 p.m. to 8 a.m. Wednesday, and from 11 p.m. Saturday to 9 a.m. Sunday.

What a clown show!

It’s important to note that back in July, Ford said that he wasn’t in favor of having to “show your papers” because he didn’t want to have “a split society.”

FLASHBACK: Remember when Premier Doug Ford said “we aren’t going to have a split society”

Welcome to the Divided Province of Ontario!

The thing is, the vast majority of Ontario residents above the age of 12 have been vaccinated. At the time of writing, 86% of residents 12 and up have had one dose, and over 80% are fully vaccinated according to Canada’s COVID-19 data tracker.

But just like it is in the U.S., it’s pretty clear that these vaccinated Canucks don’t trust the efficacy of the vaccines.

Ford caved to the mounting public pressure to implement a “vaccine passport” in Canada’s largest province. The vaccinated people of Ontario have been making a big stink that they desperately want to exclude the unvaxxed from society — and they’re the majority. They made the “right” choice and they want to force everyone else to make the same “choice” through social exclusion and coercion.

As for Ford, well, he’s trying to have his cake and eat it, too. That’s not a surprise if you’ve seen the guy. Let’s just say that it’s not a shocker that issues of public health are eluding Premier Ford.

Here’s a video he tweeted out about how he “hears” the concerns about civil liberties, but they can just take a backseat to the threat of an airborne respiratory virus with a general recovery rate of above 99% because… reasons.

I know that many of you are concerned about the proof of vaccination & what it means for your civil liberties.

Our government understands your concerns, but our highest concern is ensuring we don’t lose our hard fought progress in our fight against COVID-19. pic.twitter.com/PY8CJ9XjPD

The Ontario government COVID website has this nifty little interactive tool that shows you “likely sources of infection” in different categories. Users can select up to 5 things to compare and can go all the way back to January 2020. If you play around with it a bit, you can see where “outbreaks” occurred.

Here’s a screenshot of one I created showing that nursing homes were significant sources of outbreaks and that restaurants, bars, and gyms never were. 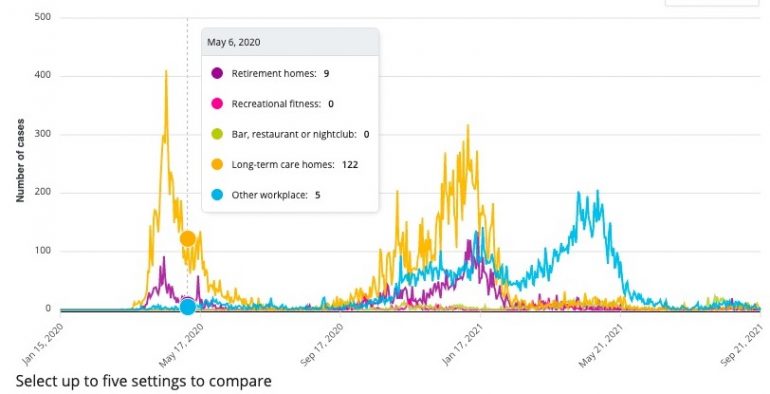 It should be noted that Ontario did lock down indoor dining for several months in 2020, but there were no significant spikes when it resumed.

When the crackhead brother was the better leader — and he undoubtedly was — you’ve got problems there, Ontario!

In a presser on Wednesday morning, Ford said that the vax passport was a “temporary measure.”

At a news conference Wednesday morning, Ford said he knows this is a “divisive” issue, but said it’s necessary to keep the province open in the coming months.

“We can’t afford to shut down again or see a sudden surge in cases like we’re seeing in other places across the country,” Ford said.

“We will only use these certificates for as long as they are needed, and not one day longer.”

The Ontario government has given no metric indicating when the vax passport won’t be needed. If 80% of people over the age of 12 are already vaxxed, people are still mandated to wear masks and stay “6 feet apart” everywhere anyway… why implement the passport?

And… there it is:

Chief Medical Officer of Health Dr. Kieran Moore has said he believes the system will lead to a boost in vaccinations, particularly among those aged 20 to 39, since that cohort often frequents venues covered by the program.
Source: CBC News

It’s to force the unvaccinated to get the jab while ignoring the concept of “natural immunity.”

Did they force people who already had Covid to get the vaccine in order to inflate the success rate of the vaccine by embedding natural immunity into the data?