Some of the so-called “anti-racists” have said that babies are racist. Robin DiAngelo said, “Hold my beer.”

Recently, many of us have seen this claim going around that babies are racist.

It’s based on studies that examine how long a baby looks at the faces of people from different races.

There are a plethora of articles and studies that claim to show this.

NPR way back in 2009 was posing the question, “Can Babies Be Racist?” 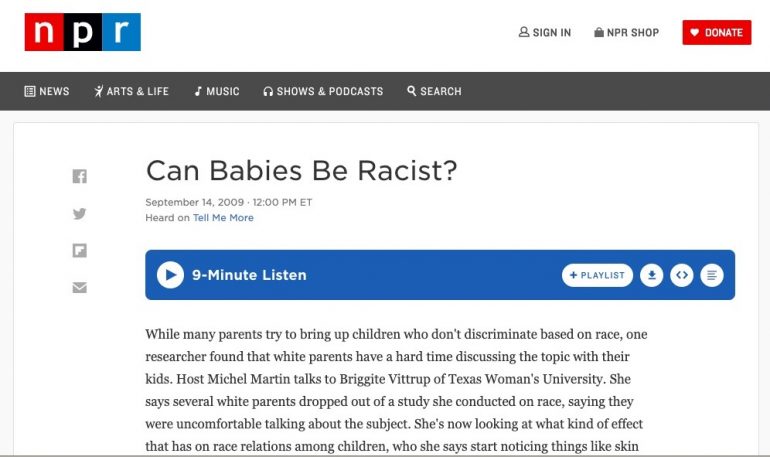 A 2017 study from the University of Toronto got a lot of attention because it appeared to show that babies “begin to show racial bias” as early as six months.

And recent reports are claiming that this actually begins at 3 months when a baby’s vision is finally less blurry.

Earlier this year, the intrepid Christopher Rufo discovered that Arizona’s Department of Education had included in their Diversity, Inclusion, and Equity (DIE) training sessions recommendations on how parents should instill “antiracist attitudes and actions” beginning at birth.

The Department of Education recommends a reading that claims babies are not “colorblind” and that parents must instill “antiracist attitudes and actions” beginning at birth, in order for their children to not “absorb bias from the world around them.” pic.twitter.com/6WsfMTKJMx

This is an interesting narrative that they’re going with… that babies are “born that way” and they need to be “converted” to not be racist. I’m sure that’s a standard that will be held across the board for other behaviors, right?

Here’s the thing, though. Babies basically have a preference for what is familiar, so they look at faces that look familiar, and that includes skin tone. Basically, this can easily be chalked up to a lack of exposure to other races. The article on the Toronto study says, “parents can help prevent racial bias by introducing their children to people from a variety of races.”

By the way, these studies don’t seem to mention mixed-race kids at all. What does that tell you?

But now, Robin DeAngelo of “White Fragility” fame has decided that she’s going to go much further than just newborn babies are racist — she’s claiming that the magical, mystical forces of race were acting on her when she was just a fetus.

This is the same person who said that smiling could be racist.

“White people are invested in the racist status quo for lots of reasons,” says the white woman makes $728,000 a year from her neo-racist grifting.

“I think it’s unfortunate, but I do think we have to see it as in our own best interest,” continued DiAngelo.

“So, a couple of things have to happen there. One is — it’s a little more abstract, but — It’s almost like you have to un-… un-… dismantle your very identity to the core and rebuild it. Because even before I took my first breath, as my mother carried me in pregnancy, the forces of race were operating on us…” she said.

Not to be outdone by those that claim babies are racist, Robin DiAngelo claims the “forces of race were operating on her”as a fetus. pic.twitter.com/4HFey8ttRM

The video is just a snippet of one of her many “diversity” speeches from a watchdog group in Milwaukee. DiAngelo gives a lot of speeches, especially now that she’s had a New York Times Bestseller. Interestingly, even though her second book was a flop, DiAngelo doubled her speaking fees to a whopping $14,000 per speech back in July.

It’s not a surprise that DiAngelo is thinking that the bad juju of racism was working on her as a fetus because she’s clearly got a whole lot of pent-up racism as she admits in her books. Even in her speeches, she admits that she’s a racist herself… just like every white person.

So, why the hell should anyone listen to a “diversity trainer” who openly admits she’s racist? The answer is, we shouldn’t.

The inestimable John McWhorter, a black Columbia prof who has expertise in multiple areas and has forgotten more things about more subjects than I’ll ever know in my lifetime, reviewed “White Fragility” in an article in The Atlantic last year. It was absolutely damning. He called it “dehumanizing condescension.” This one sentence sums up his feelings, “Few books about race have more openly infantilized Black people than this supposedly authoritative tome.”

It’s only a matter of time before DiAngelo starts discussing the “white supremacy” of gametes and how the “segregation” of alleles is racist… or maybe it’s “progressive” and anti-racist. It’s hard to tell these days. After all, segregation has now been a thing that the alleged “anti-racists” are advocating for…

What will be really exciting is when DiAngelo realizes that she just admitted that she had “personhood” when she was a fetus. That’ll be fun to watch.