Is this “The Science” now?

Dr. Anthony Fauci, who seems to favor jabs over therapeutics — he did this with the AIDS epidemic as well as with COVID — is gaslighting the American public in real-time.

The “medical expert” who has had absolutely atrocious public health messaging for years was making the rounds on the Sunday cable news shows talking about his favorite subject in the whole, wide world — vaccines.

The prevaricating authoritarian Smurf sure does love the camera, doesn’t he?

Fauci was on CNN’s State of the Union with Dana Bash and said that the massive flood of illegal migrants is “absolutely not” responsible for the spread of the airborne respiratory virus even though they’re not being quarantined and are being seeded into the country by the tens of thousands a month.

He said that he doesn’t think that enforcing immigration law is “helpful” in preventing the spread of the China Virus despite approximately 20% of them testing positive for it.  That’s 1 in 5 of 1.2 million.

Although he didn’t say it in so many words, that’s clearly the implication.

Here he is saying that expelling illegal migrants is “not the solution” to an outbreak.

Fauci on Title 42: “Focusing on immigrants, expelling them… is not the solution to an outbreak” pic.twitter.com/jltZlYXslr

The full segment with Fauci can be seen here.

During the segment, Bash asked Fauci about the “Republican” theory that the China Virus is continuing to spread because of “immigration.”

She chose her words carefully asking, “Are immigrants a major reason why COVID-19 is spreading in the U.S.?”

So many weasel words that left Fauci a lot of room to squeeze through.

Fauci then says that the problem is Americans and implies that it’s really those damned unvaccinated Trump supporters. Of course.

One absolute partisan hack interviews a comrade and this is the crap you get.

It’s a disingenuous question — the airborne respiratory virus is clearly endemic in the United States, but it’s pretty clear that several of the variants entered the country through travel.

We’re also seeing more than 100,000 illegal border crossings per month and those people are being sent off to other parts of the country without being tested or quarantined.

Is he unclear on how an airborne respiratory virus spreads? Does he not understand that if you continue to bring in people who have the virus will continue to spread the virus?

While he was dismissing “immigrants and tourists” as drivers of spread, he is advocating for the vaccination of schoolchildren who haven’t been shown to readily spread the virus.

“A requirement for children to come to school to be vaccinated with certain vaccines is not something new,” Dr. Anthony Fauci tells @jonkarl about California Gov. Gavin Newsom’s new mandate for all eligible students to get the vaccine. https://t.co/klej7IFATz pic.twitter.com/ZEVBb4Vkc4

There is no consensus on this. In September, the United Kingdom announced that it doesn’t recommend vaccines for healthy children under the age of 16.

One of the leading epidemiologists on the planet — trained in “evidence-based medicine” — disagrees with Fauci and he backs it up with… wait for it… actual science.

Who are you gonna believe, Dr. Fauci who has some sort of weird fetish for vaccines over therapeutics, or Dr. Paul Alexander, an infectious disease expert that cites studies backing up his claims?

You know what Fauci would say… 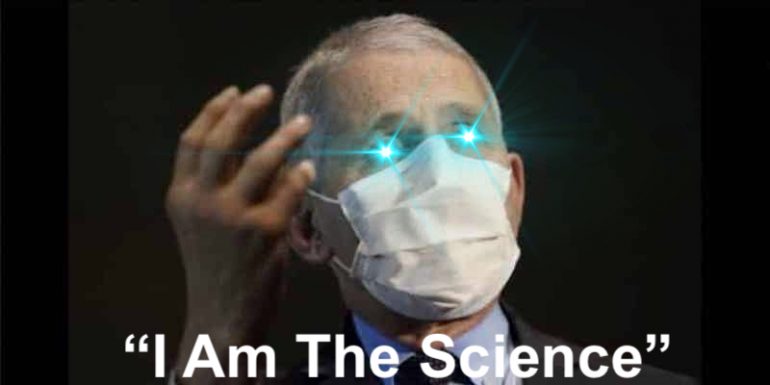 But Fauci wasn’t finished with his tour of the Sunday shows. He also went on CBS’s Face The Nation with Margaret Brennan.

It was here that he said that it’s “too early” to determine if Americans can gather for Christmas.

MARGARET BRENNAN: But we can gather for Christmas, or it’s just too soon to tell.

DR. FAUCI: You know, MARGARET, it’s just too soon to tell. We’ve just got to concentrating on continuing to get those numbers down and not try to jump ahead by weeks or months and say what we’re going to do at a particular time. Let’s focus like a laser on continuing to get those- those cases down. And we can do it by people getting vaccinated and also in the situation where boosters are appropriate to get people boosted because we know that they can help greatly in diminishing infection and diminishing advanced disease, the kinds of data that are now accumulating in real time.

REPORTER: “But we can gather for Christmas or it’s just too soon to tell?”

There’s only one proper response to this…

It’s time for Fauci to stop appearing on the Sunday cable news shows.