In the second week of January — one day after the election was officially certified for Biden — all of Silicon Valley decided, together, to pull the plug on a sitting President’s online presence.

That included social media, obviously, like Twitter and Facebook. But it included a lot more than that, as well. We covered that here. TECH TYRANNY: War Declared, Trump, Some Supporters Lose Digital Assets… Not Just Media Sites, Either

In the intervening 10 months or so, we have seen the ugly side of the Democrats as they ram through policies so bad that Biden’s approval rating is only slightly higher than a root canal.

The cherry on top might well have been the Moscow-trained Order of Lenin recipients being nominated as a Bank regulator he’s nominating while trying to pass ‘transformative’ government overreach under the guise of a ‘budget bill’ to get past the filibuster.

The same people chanting ‘Let’s Go Brandon’ are sometimes heard lamenting that they could really go for some ‘mean tweets’ right about now.

The former President has been pretty quiet lately.

But that’s about to change.

You guessed it. It took a while, but the wait seems to be just about over. And it’s aiming high, already looking at a streaming service and other aspects of the parallel economy conservatives will need to build to avoid getting unplugged in the future.

TMTG has not set its sights low. In addition to the Truth Social app, which is expected to soft-launch next month with a nationwide rollout early next year, the company says it is planning a video-on-demand service dubbed TMTG+ that will feature entertainment programming, news and podcasts.

One slide in a TMTG presentation on its website includes a graphic of TMTG’s potential competitors, which range from Facebook and Twitter to Netflix and Disney+ to CNN. The same slide suggests that over the long term TMTG will also become a power in cloud computing and payments and suggests it will go head-to-head with Amazon, Microsoft, Google and Stripe. 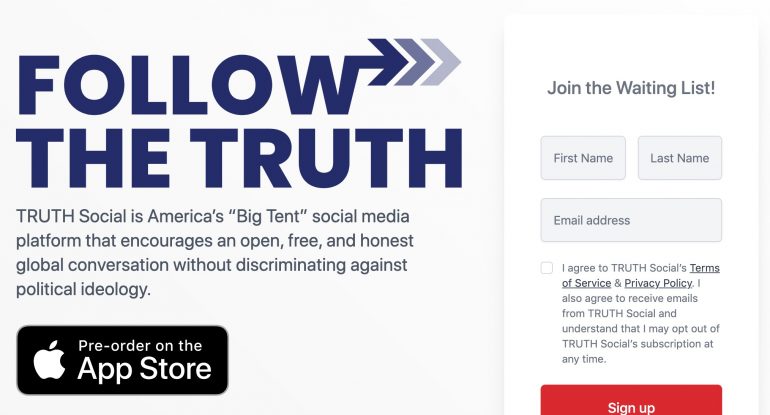 Bring on the mean tweets… or whatever the new name for his social media posts will be called.

If you thought his top-tier trolling was fun while he was President, just imagine how fun things will be now that he’s had an insider’s look, but is free to speak as a private citizen.

And he can continue living rent-free in the Democrats’ heads.